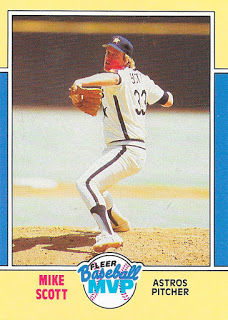 It’s Thursday, April 6th and it’s the fourth game of the season. The Astros are 3-0, looking to make it 4-0 with a win tonight to (hopefully) sweep the Mariners and get started off well in the AL West. My man George Springer already has 3 homers, including a walkoff in the 13th last night and a 454 foot bomb to lead off tonight.
While I haven’t been posting as often as I anticipated, I have managed to keep up a nice string of trades – albeit in smaller quantities than I’d originally hoped. Still, it feels great to unload a bunch of cards and get some nice handfuls of things I’d like in return.
Like this Mike Scott from one of the litany of Fleer oddball sets that came out in the mid/late 80s. This one is from 1988 Fleer Baseball MVPs, and came to me via another trade over at TCDB from Kevin, whose handle is Lexie130.
The rest of the cards that came in from this trade were basketball cards. Basketball, you ask? And just why would this be?

Well, for starters while I’m trying to clear out nearly all of my non-baseball cards, I am open to hanging on to and even acquiring some select cards of players I enjoy. These Rockets cards all harken back to the days when I would lay on my parents living room floor and watch them pound through the playoffs on their way to a pair of NBA Championships, with a young star in the making in Robert Horry, a great guard in Kenny Smith, and the always entertaining Mad Max.

I’ve never really had any vintage basketball or football cards, so I’ve decided to pick a few up in trades as well. These 79-80 Topps feature a nice design which I would certainly copy for baseball customs. Rudy T coached those championship Rockets teams, so picking up a card of him as a player was a no brainer. Gianelli was a member of the championship Knicks in ’73. Otis Birdsong is a hometown boy, one of the handful of Houston Cougars to have his number hung in the rafters after his stellar collegiate career before becoming a four-time NBA All-Star. The Gianelli and Birdsong are going out for autographs, and while I would love to get Rudy’s card signed, he doesn’t seem to reply to TTM requests. I’ll just have to hang onto it and hope for a signing sometime here.

Kevin, thanks for the trade! The Astros are tied 2-2 going to the bottom of the 6th. Let’s do this.