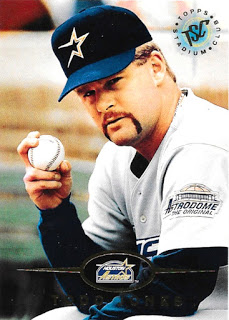 “You know what you need to do, Marc? Catch up on those trade posts, or this slider’s coming straight for your shins.”

Nah, Todd’s totally right. I’m way behind on posting, thanks to a bunch of you who have taken me up on my trading flurry early in the year. I still want to get a lot more moving, but the coming baby and job hunt still have a lot to say about how my time is allocated.

Anyway, here’s a post that’s long overdue. I think this trade actually came in sometime around December/January (could be even later, yikes!), from Charlie at Lifetime Topps. I’m a little sketchy on what all was involved in the package at this point, but I scanned some highlights before I put them away. Let’s get to it! 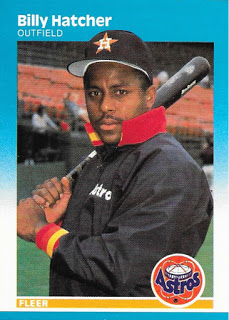 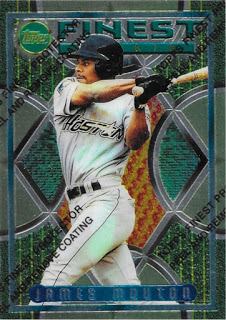 Here we have some local outfielders. I’m pretty sure the Hatcher was a Glossy. I loved Mouton when he came up – he lived in the same suburb as I did and I got to see him at the little league fields later on when he brought his kiddos to play. I don’t have many of the early Topps Finest Astros, so this was a nice addition.

Between all the 1984 I purchased and the stacks that were sent my way when I was building the set, I was pretty surprised that this one had eluded me. That’s a lot of firepower on one card, and completes my Astros needs for ’84 flagship. 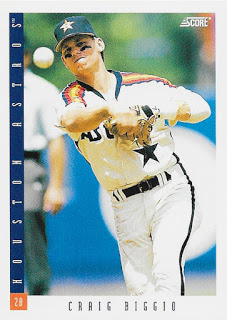 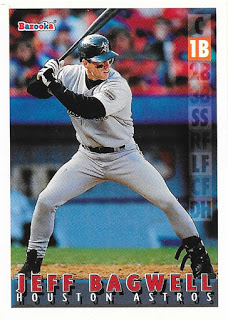 Some lovely 90’s Killer B’s were included as well. I can’t tell if ’93 Score gets a good or bad rap among the bloggers – I’ve seen a few bash it, but I like the simple design, and a lot of the photos are good. I was a little surprised to see I didn’t have this 95 Bazooka Bagwell either.

Oooooh, shiny parallels from 1995 SP. Upper Deck called these Superbafoil, which is way better than “Silver.” This trio knocked out my wantlist. 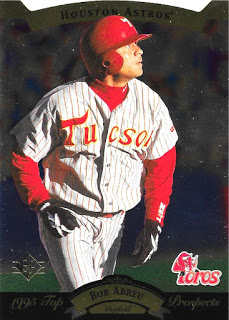 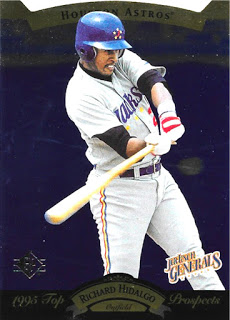 Also from SP were a pair of die-cut prospects that went on to have fine major league careers. The only problem is we let Abreu get away in the expansion draft.

Speaking of die-cuts, there was also this lovely Darin Erstad 1999 Topps Lords of the Diamond insert. So shiny, much wow, very point. I got a couple boxes of ’99 Topps at Christmas that year, and loved these and the Picture Perfect inserts. I still need 8 of these (9 if you count the second Bagwell I need). 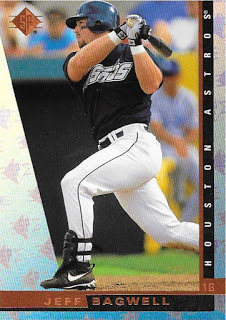 Hell, let’s wrap up with some more shiny! I never picked up much 1997 SP. Heck, I don’t think I bought much in 1997 at all – my attentions must have been diverted. But this Bagwell was another welcome addition to the collection, and looks snazzy to boot.

Thanks for the great trade Charlie! Sorry about the delayed post.

0 Replies to “A Lifetime of Astros Cards”