by MarcPosted onNovember 5, 2017July 9, 2019
Now that the playoff chaos has subsided – and my Astros are World Champions (yes, I’m going to keep mentioning this because it’s still quite a bit amazing and hard to believe) – I have a lot of catching up to do around these parts. Basically, I have most of a year’s worth of blogging that I need to atone for, from the trades that rolled in to the TTM roundups, and yes, even a couple card shows. I figured the first thing I wanted to take care of was the past couple months of autograph returns, so that I can officially file these away. I managed a post on July during Harvey and August not too long ago, so let’s pick back up with September’s haul. 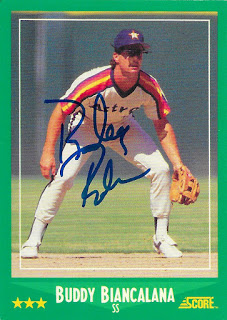 Buddy’s return was one of the longest that I’ve had since I resumed my TTM endeavors nearly four years ago. This one clocked in at a full 10 months, and I had all but written it off – which was a bit frustrating since it was my second attempt with him. Thus, the return was a nice surprise indeed. The hero of the 1985 World Series, made famous by David Letterman himself, Buddy was a short-term ‘Stro in the second half of 1987. He made it into 18 games in a Houston uniform, and was released at the end of the season. Buddy was traded straight up for Mel Stottlemyre Jr. – someone I didn’t even know was in the Astros system. Mel Sr. spent time as a Houston pitching coach, and probably elsewhere around the system, so it makes sense that we would have drafted him. Too bad he got away, as Biancalana went just 1-for-24 (.042) with a walk and 12 strikeouts in his brief stop. 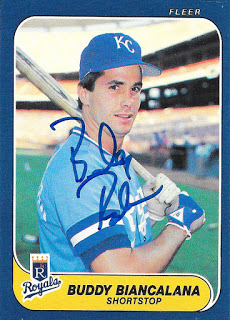 This request was an outstanding return, for a few reasons. Craig Cacek, despite some outstanding minor league numbers, only got a single cup of coffee at the big league level. What’s worse, in said cup Craig managed to become one of baseball’s “one-hit wonders,” going 1-for-20 with a walk and three strikeouts in his seven games in 1977. He spent as many seasons at the AAA level as he did games in the majors, playing there from 1976-1982. He was a great contact hitter with excellent plate discipline: in the minors he hit .301 with just 496 strikeouts in 5485 plate appearances – less than once every 11 plate appearances – and 778 walks. In researching his career, I came across an amazing old LA Times article on a men’s semi-pro team in California, the Hawaiian Buffaloes, titled The Boys of Fall. Seriously, you should go read it. Craig not only signed the custom I made, but also he sent his thanks for the extra copy I included and told me it was very cool. He answered my questions thoroughly – there’s ink spilling into the margins of the page – and it’s clear that after a frustrating exit from affiliated ball, he was able to reclaim his love of the game – GO READ THAT ARTICLE ALREADY. He also signed a pair of index cards I’d included as well. 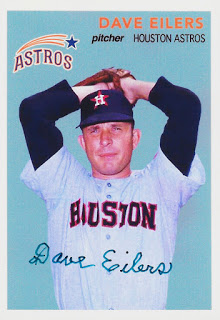 Mr. Eilers is another ballplayer who closed out his major-league career with a stop in Houston. After three years split between the Milwaukee Braves and the New York Mets, Dave wound up with the Astros for the 1967 season. He pitched 59 1/3 innings with the club that year, good for almost half his career total, going 6-4 with a 3.94 ERA (84 ERA+) and a 1.433 WHIP. His 3.30 FIP for the year tells us that his defense didn’t exactly help him out, however. Dave signed the custom I sent and kept the other one, which is always a good feeling. He was a Texas boy, born in Oldenburg – near La Grange, between Houston and Austin, which meant that several friends got to come see him pitch in his final season. Dave also answered my questions, including one favorite I always include: “What’s the strangest thing you’ve seen in baseball?”
His answer: “A player call for the infield fly rule and get both feet caught on [the] bag and fell down and missed the ball.” Whoops! 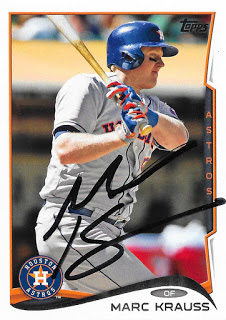 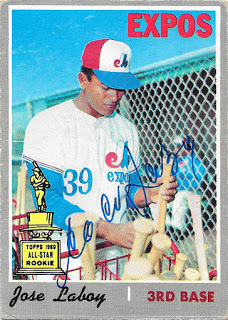 First – how can you not love this card? I know a lot of you aren’t too fond of it, but by god, I have such a soft spot for 1970 Topps. I mean, you’ve got Coco Laboy at the bat rack (which almost looks like a shopping cart), clearly during Spring Training, with those fantastic old Expos uniforms, and that giant All-Star Rookie trophy.

Coco wasn’t a particularly spectacular ballplayer, but he hit the first homer in Montreal for the Expos, making him an instant fan favorite. After reading about him in Jonah Keri’s wonderful Up, Up, and Away, he was on my radar as someone to potentially write if I came across the right card. Well, this is the right card! 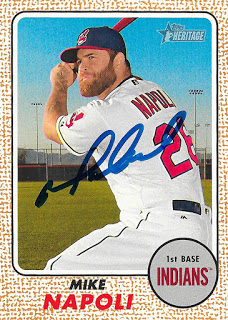 It’s not too often that you see a fairly well-known active player signing, but I noticed from the reported returns at the site I follow and a few Facebook groups I’m in that Napoli is fairly consistent for single-card requests. This year’s Heritage is particularly nice for autographs – there’s no need to pre-treat the card thanks to the vintage stock, and the photos almost all lend themselves well to signatures. I’m really happy with the way this one turned out. 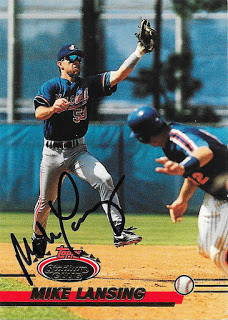 Lansing was another guy that Jonah’s book put on my radar, making me reconsider him. I think I had so many of the same few cards of him in my boyhood collection that I just got frustrated with his existence. What I didn’t realize is that Mike played his way into a roster spot in 1993 Spring Training despite never having appeared above the AA level. Mike spent last year coaching for the Reno Aces, where I wrote him towards the end of the season. That SC with the rundown is pretty sweet, and who doesn’t love a double-dip shot? 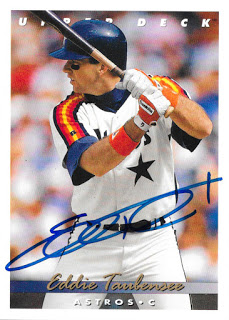 Ah, Eddie Taubensee – one of several catchers the Astros had before settling on the combo of Brad Ausmus and Tony Eusebio. Watching Eddie is perhaps the earliest instance I can recall of a player on my favorite team just frustrating the absolute crap out of me. I don’t believe there’s any way to query how often he struck out looking, but I have distinct memories of telling him to take the bat off his shoulder, dangit! Eddie blossomed a bit once he left the Astros and landed with the Reds. Unfortunately, Eddie is also part of one of the poorer trades in Astros history, when they acquired him and Willie Blair from Cleveland for Dave Rohde and one Kenneth Lofton. Sigh. Oh, what could have been, right? 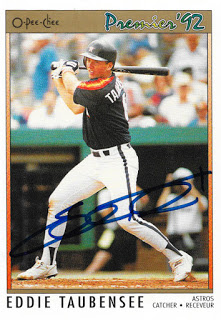 For as poor as Eddie hit with the Astros (.234 with 125 K’s in 653 PA), he’s an excellent signer. I wrote him care of the Augusta Greenjackets, the Giants short-season A ball club in the South Atlantic League. In his first managerial gig, Augusta finished 32-38. 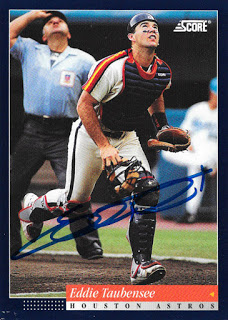 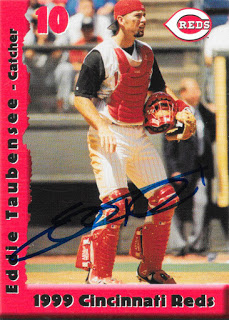 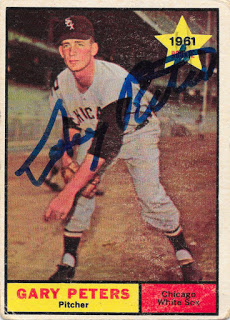 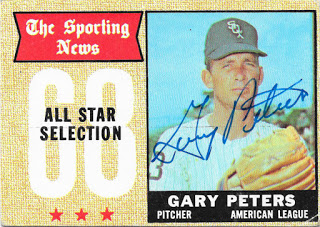 Let’s close this one out with another nice vintage return. Gary Peters had a fine career, pitching 10 full seasons in the majors for the Sox, both White and Red. Despite brief appearances at the big-league level in each season from 1959-1962, Peters didn’t stick until 1963, when he really stuck. He led the AL with a 2.33 ERA, going 19-8 in 30 starts and snagging the Rookie of the Year award. He was named to two All-Star teams (’64 and ’67), led the AL in wins (20) in 1964, and ERA (1.98) in 1966. It’s always nice to add another ROY to the collection.
That’s nine returns – including four new Astros autographs! September was a pretty good month for the autograph collection. Stay tuned for the October roundup. Then I’ll probably jump back to January and try to knock out the rest of January-June.
– Marc