by MarcPosted onNovember 4, 2017July 9, 2019
They freaking did it! I know, this is days late, but I’m honestly still a bit in shock. I had a feeling about this team back at the beginning of the year. Something was just different. The offseason moves felt right. There was a full season of Bregman ahead. The pitching was questionably sound, but hey, it could work – and work it did. We had the best offense in baseball by several metrics, including the second-most dingers (second to the damn Yankees by a mere three!) and the least strikeouts. Yeah, that’s right: this team that I watched practically eat pine for years with record-setting whiff counts led the league with the fewest strikeouts.

They started with a terrible series at Cleveland, then launched into orbit and ran away with the AL West. They dispatched the Red Sox handily in the ALDS, as they should have. They let the Yankees take them down to the wire in the ALCS, which wasn’t crazy given the pop in that lineup and the strength of their pitching.

The same happened with the Dodgers, except the unthinkable happened as Baseball God laughed in everyone’s faces and put on the craziest and one of the most memorable World Series we’ve ever seen. Game one was a classic pitchers duel. Games two and five were absolute madness. There were more dingers than ever before. Pitchers couldn’t command their sliders, for whatever reason. There were extra innings on extra innings, and #weirdbaseball. Lance McCullers became the first AL pitcher to get an RBI in the WS for the first time in a decade, but he also became the first pitcher in baseball history to hit four batters in a game and not give up a run. It seemed the only thing missing was position players pitching, or possibly a Waxahachie swap. There are so many things to talk about, but I feel like I barely have the words.

Finally, after three decades of fandom, after 56 years of franchise history, my favorite team has captured a championship that felt like it would always elude us. From the heartbreaks in 1980 and 1986 which I can only read about, to the ones I attended in ’97, ’98, ’99, the crushing blow that broke Brad Lidge in 2004, and that god-awful sweep in 2005. Through the awful 100-loss seasons as we pinned our hope on prospects and the process: we have endured. The wait is over, and the glory tastes so sweet.

So when it came time for the parade on Friday, I sure as hell wasn’t about to miss it. Sure, there may be more, and even soon – this team is damn good and will be for a while. But I’m not about to count any chickens. It could very well be the only one I have the chance to attend in my lifetime.

I was already on track for overtime on the week, so I put in a half day at work before re-parking my car and walking into downtown. I ran into a few friends, squished through the hordes of people, and wound up with a decent spot at the start of the parade just in time to see the last two fire trucks with players pull off onto the route. People started to stream away, either heading back toward their cars or over to the park at City Hall where the speeches would be held. Welp, time to walk back, I thought.

Then I took a look at the street signs, and noticed that I was a block away from where the parade was supposed to end – and people were walking away from it. So I writhed my way through the crowd, the proverbial salmon bound upstream, and settled into a prime parade watching spot, and let the joy wash over me. 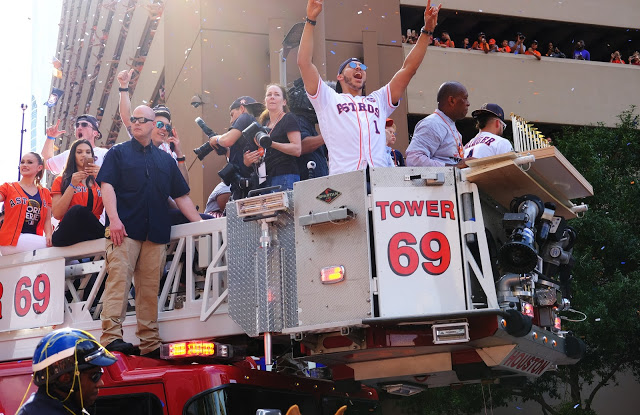 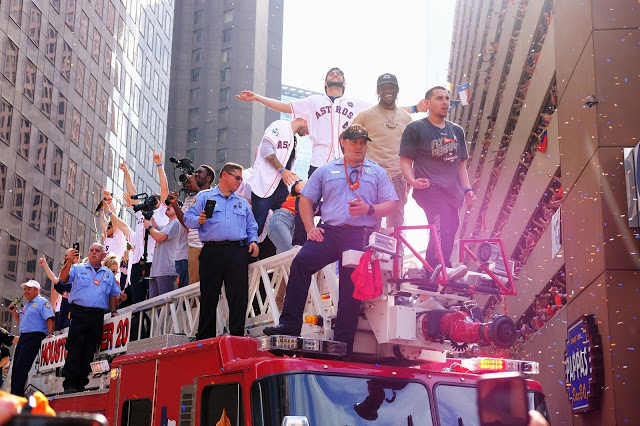 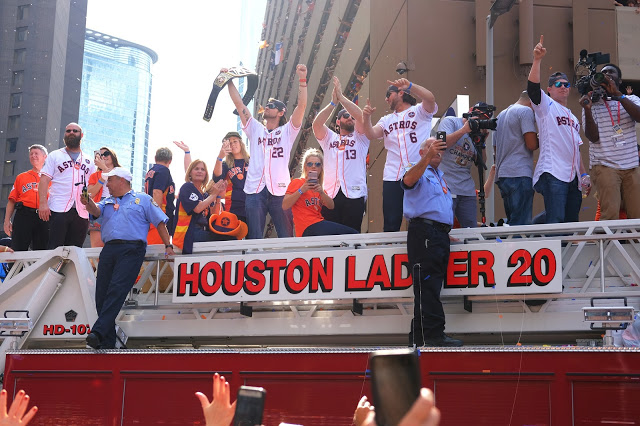 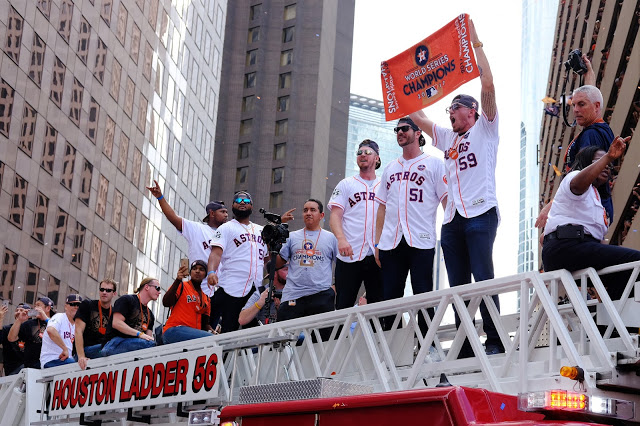 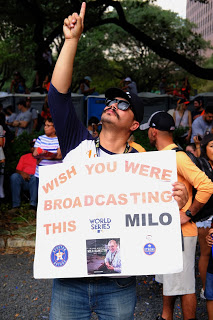 This one’s for Milo Hamilton, Gene Elston, Bob Allen, and Judge Roy Hofheinz, may you all rest in peace. I’m sure you’re all sipping champagne in the clouds right now.

This one’s for Houston, y’all. It’s been a hell of a year.