Another day, another trade post! This one is a current trade – I’ll play some more catch up in a bit, but I don’t want to let the most recent few trades slip by me. It’s is all part of my “being a better blogger” plan, and I know you appreciate it dearly. Just kidding, let’s get to the cards!

This is yet another trade that took place over at TCDB, from my new trading partner T.J. He’s an Indians fan, and before these cards even showed up in my mailbox he’d already opened another trade proposal with me! Mighty quick on the trigger, I must say.

It was a small swap – 9 cards for me, 13 for him, but it filled in some nice holes in the collection. Missing O-Pee-Chee cards are always welcome. These two guys are were 80s mainstays, though their roles in club history sometimes get forgotten. Puhl spent so much time in right field for us that he’s fairly high in the club record books in several of the counting stats. 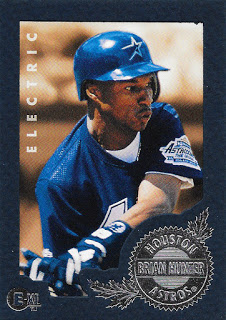 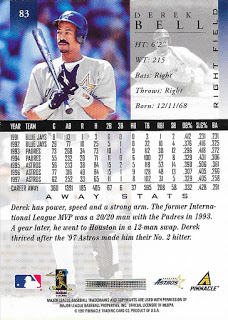 Here’s another pair of corner outfielders, this time from the 90s. I love that 1996 Emotion-XL set. It’s the first set I can recall that had paper frames, something Donruss broached with the massive Diamond Kings sets in the early aughts and that Topps has revived with Gypsy Queen. I’d be tempted to build this set. The Derek Bell is an “Away Stats” parallel from 1998 Pinnacle. Yes, they had the standard base set with normal stats, and both Home and Away parallel versions. In fact, I thought I had the base Astros set completed, but when I was filing this puppy away I noticed my Sean Berry was actually an Away Stats version as well. GRRR. Now I need to track down another Berry. I haven’t pulled out the Bagwell/Biggio binders to check their cards yet, but that’s my next task after this post.
The most frustrating thing about card back variations is that you could be flying through a stack of cards on a dig and think, “Well, I’ve got all these,” and totally miss a card you need. Guess I’ll have to double check these when I come across them. The next most frustrating thing about card back variations is deciding how you display them. Do you flip them in your binder to display the back? That can look pretty weird. Or do you simply slip them in as normal, and know that you’ll have two or three cards that have the exact same obverse showing? Asking for a friend. 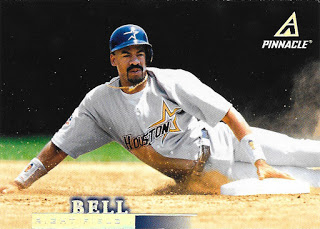 Here’s the front of that Derek Bell card. Ooooh, yeah. This base is miiiiiine. 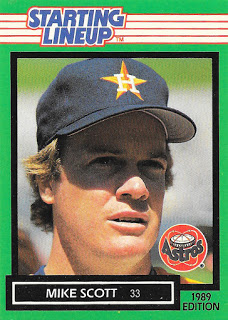 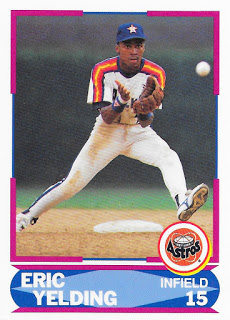 TJ had a couple of oddballs I needed as well. Starting Lineup cards are hard to come by, so those are a little extra-special and much appreciated. I’ve now got both the Billy Hatcher and Mike Scott cards from 1989, though my Hatcher could use an upgrade. The Eric Yelding is from the 1990 Score Young Superstars inserts, which completed my Astros needs for that set. These were pretty cool glossy inserts that Score ran their first few years. I can’t decide what Yelding is doing here – is this a double play ball coming from first base? Is it a throwdown from the catcher on a stolen base? Is it a weird high hop up the middle? Nothing about his position looks right. 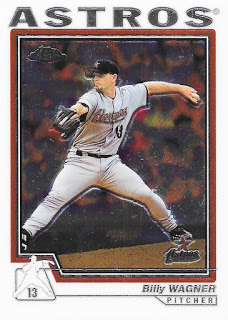 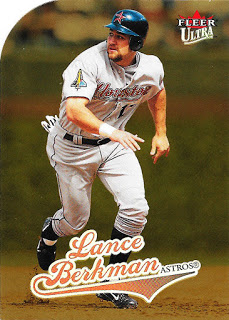 Finally, we’ll end with a couple shiny ‘Stros from 2004. Billy the Kid was shipped out to Philly before the 2004 season, but that didn’t stop him from turning up in an Astros uniform in Topps Chrome. The Berkman is another parallel, a Gold Medallion from 2004 Ultra, complete (or is it incomplete?) with die-cut corner.

Thanks for the cards T.J. and here’s to our next trade!