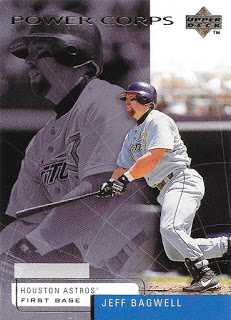 Oofta – I’m a better person than this, really. I swear. Here’s another trade from way back in January that never got posted. I should just stop apologizing in the intros of these posts, because there’s going to be a lot of them. I’m determined to get caught up by the time the new year rolls around.

This little stash of cards came from Jeff, aka FASportscards at TCDB. Hence, the Friggin’ Awesome in the headline up there. I helped Jeff out with some set needs, and even managed to dump a dozen football cards his way. Anytime I can trade some non-baseball cards away for Astros is an excellent trade indeed. What’s more, there’s a really sweet card at the end of this post that was the icing on the cake. Don’t peek, just wait. It’s a short post, I promise.

If I had just been flipping through a box of cards, I swear up and down that I would have told you I already had this Jeff Bagwell Power Corps insert. Well, I would have been wrong, but thanks to a new trading pal, I no longer have to worry about such matters. 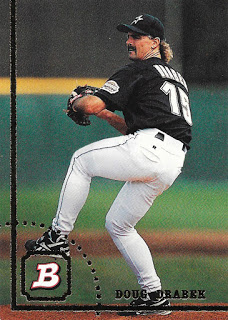 You’ve gotta love ’94 Bowman. It’s elegant in its simplicity. If you follow this blog at all, you’ll know that I’m a sucker for the masterfully mustachioed and mullet-ed Doug Drabek. Also, I think the blue top/white pants combo from the late ’90s Astros is a severely underrated uniform. 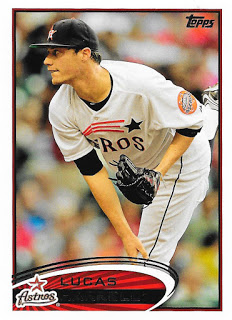 Speaking of sweet uniforms, this 2012 Topps Update features one-time staff ace Lucas Harrell (good grief, that was a real thing) sporting what I think is the absolute best uniform in club history, the 60’s Shooting Star digs. I mean, just look how great it looks. If it weren’t for that ugly logo in the corner, you’d think they might have never left these behind. I think Jeff knocked off most if not all of my base needs from 2012 Update in this trade. 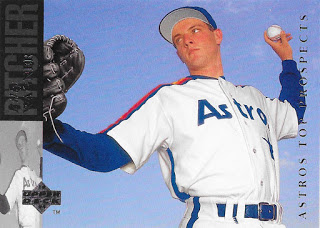 This puppy was a surprise extra that Jeff tossed into the fray. A Billy Wagner rookie from 1994 Upper Deck Minors? Oh, helllll yes. Billy the Kid deserves to be in the Hall, by the way. He outranks several relievers already in there, and while he doesn’t have the monster save totals of Rivera and Hoffman (422 is still a ton, by the way – good enough for 6th on the all-time list, two behind John Franco and well above Eckersley, Fingers, and Gossage), his rate stats are INSANE. A career ERA of 2.31, good for an ERA+ of 187. A .998 WHIP. 1196 strikeouts in just 903 IP, good for an outstanding 11.9 SO/9 rate for his CAREER. And a 3.99 strikeout-to-walk ratio. I’m just saying, give the man some fair consideration. The stacked ballot right now doesn’t help, but Billy has been trending around 10% of the vote. Maybe we’ll see a jump this year. 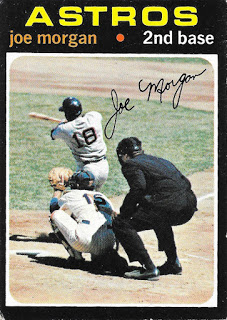 Here’s the piece de resistance of this trade: a lovely, soft cornered 1971 Topps, the infamous Joe Morgan action card wherein we get to see more umpire butt than anything. Getting a sweet piece of vintage in a trade is always nice, but checking the box off on a star card in a 46 year old set is, well, friggin’ awesome.

Thanks again for the trade Jeff!