The mail returns started to taper off in March, but what it lacked in sheer quantity it certainly made up for in quality. Let’s take a look at the springtime treats that rolled into the ol’ mailbox. 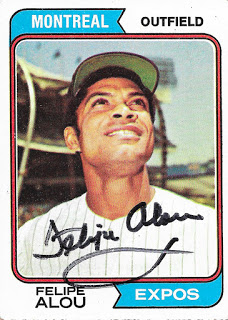 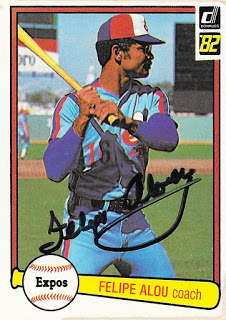 Felipe is the head of one of baseball’s greatest families, the standout of three brothers who not only all played in the majors, but once manned the same outfield in San Francisco. His son Moises was a star outfielder as well, playing several fine seasons here in Houston, and both he and his cousin Mel Rojas pitched for the Expos while Felipe was manager in the 1990s. I had a hot tip that Felipe signed at Giants ST, so I dashed these off and crossed my fingers. Just over two weeks later, I had two more sweet signatures! I love the semi-random coach cards that are found throughout ’82 Donruss. It seems that they chose to highlight several former stars who were on coaching staffs but not managing (Vada Pinson and Harvey Kuenn also come time mind).

I’d still like to pick up sigs from Matty Alou and Mel Rojas to round out the family.

I’d met Ken at the Winter Caravan prior to the 2016 season and gotten his 2015 Chrome Update card signed, which I’d recently picked up in a blaster. That was a Phillies card, so I wanted to try writing him to get an Astros card. I also threw in this nice looking Topps Archives card. Unfortunately that backfired as Ken signed it and sent my Astros card back sans ink. Ah well, guess I’ll have to just try again this year. 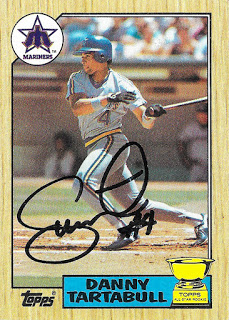 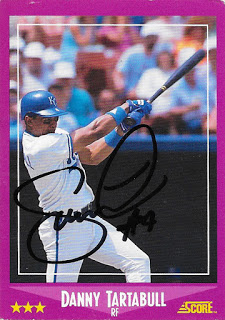 February brought in a return from the elder Tartabull, and March saw me finish off another baseball family when Danny’s return rolled in. Gotta love that ’87 Topps rookie card with the rookie cup, and that swing on the ’88 Score is just beastly. 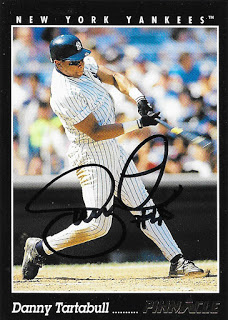 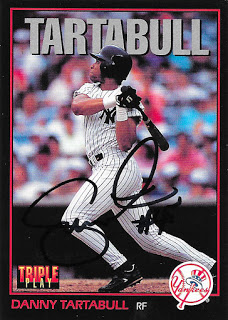 Yes, I chose two Yankees cards to send to Danny as well. I know, it’s a bit shocking. But again, that’s another sweet swing on the ’93 Pinnacle, and ’93 Triple Play just looks so cool with the giant last names hovering over the players – and that’s just a nice follow-through shot. I’m really happy with the way these turned out. 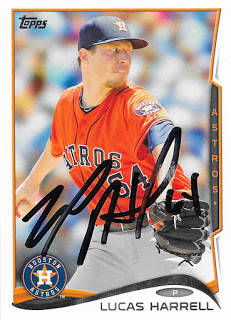 I actually managed to write about this one and another return back in March. Ol’ Lucas was once the future of the pitching staff, the 2012 staff ace (good lord those were trying times), and was laughingly suggested as trade fodder for Lucas Giolito when the infamous Ground Control leaks came out.

By that time, this card had come out, and Lucas had fallen far down the pitching depth chart. He skipped around a bit, even trying his hand (arm?) in Korea, before coming back in 2017 and working out with the Blue Jays, where I wrote him in Spring Training. 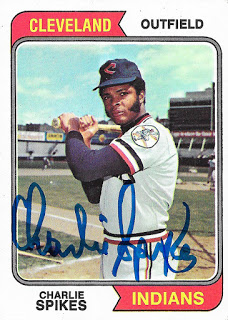 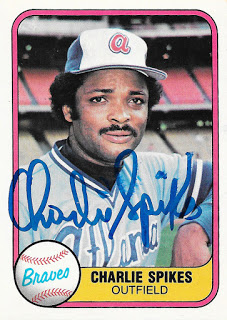 In the TTM community, Charlie is known as a great signer and often includes a handwritten note in his return. He signed a ’74 Topps, his second year card which features his glorious chops, and this ’81 Fleer for my set, as well as a pair of index cards. I also got a nice note in return. Thanks Charlie! 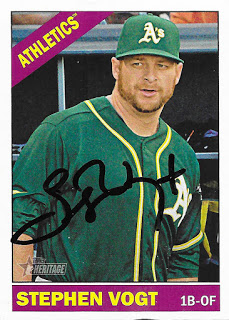 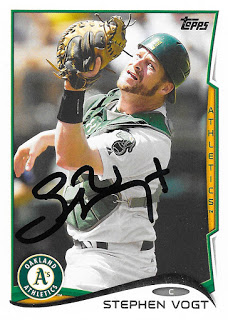 Ah, “Everything Bagel.” With the Astros in the AL West, I got to watch plenty of Vogt in action, and I really dug him. I’d written these off as gone, with them out over a year and a half before they finally returned to me. It’s always a nice surprise when something like that happens. 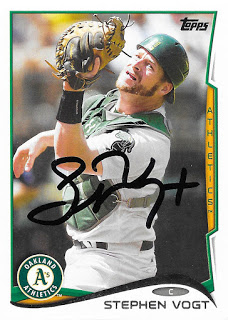 I’ve even got a spare signed 2014 Topps for any A’s fan out there that wants to take on a great big box of unwanted Oakland cards. Or any random Vogt fan, just hit me up. 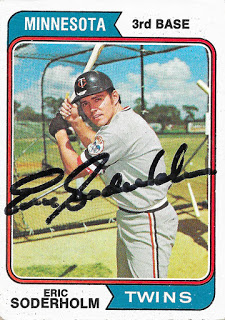 Soderholm came up as a great third baseman, winning the everyday job with the Twins in 1974 and putting up a pair of fine seasons before missing all of 1976 with a knee injury. The White Sox would take a chance on him in 1977, which proved to be an excellent decision as he put up a career year, hitting .280 with 25 homers and helping to keep the Sox in the pennant race deep into the season. He had another fine year in ’78, then finished his playing days spending one season each with the Rangers and Yankees, primarily as a Designated Hitter. Soderholm was invited to Spring Training with the Cubs in 1982, but his knees – on which he’d had several surgeries by this point – just couldn’t stand up to the rigors of playing every day anymore. 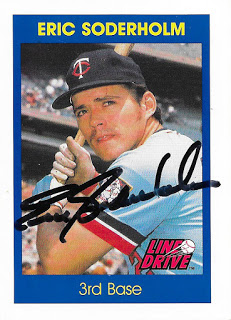 I have lots of ’74 dupes (hit me up if you need some), so I often try to find some guys to send to out of that set, and I really dug the second-year card of Eric that I came across. Of course, I had to check the ’81 Fleer set for him – a sunset card, as it were, and he’s one of the odd short-term greats featured in the 1991 Line Drive set. Three great signatures! 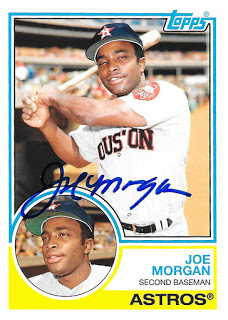 This one was the real shocker. I saw someone post that they got lucky with Morgan through the HOF. This was right after he’d had the bout of poor health, and they’d just said he was starting to improve, I believe. I got this one out as quick as I could and said a quick prayer to the baseball gods. I really didn’t expect it to come back that fast, and with this return I managed to knock out of the Astros that I figured would be one of my longer and more expensive signatures to track down, particularly among the living players.

I’m really glad this one came in – when it did, I thought I’d try one more, a vintage card this time, and dashed it out right away. The Joe Morgan window was short as can be, as that one came back unsigned.

For the record, Joe’s letter to HOF voters this year was stupid and sad. It was really disheartening to see that come out as the Hall’s official position – and make no mistake, Joe sending that letter out to a list that only the Hall has definitely signifies that it is the official position of the HOF. 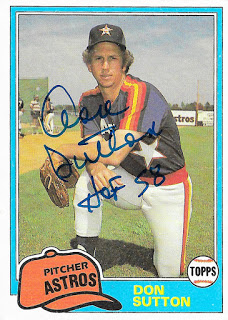 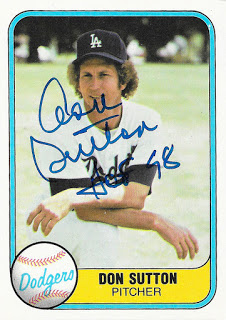 Right around the same time I saw the Morgan return, folks had been reporting a string of returns from Don Sutton, with a small donation. I’d tried twice unsuccessfully to get Don’s signature via private signings, both of which fell through (and one of which the guy still owes me money for – that’s long gone). I took a chance and dropped these two ’81s into an envelope with a donation, and a month later opened an envelope to a very pleasant return. Not one, but two Astros HOFers this month! 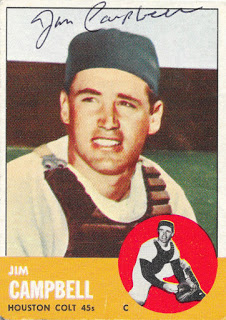 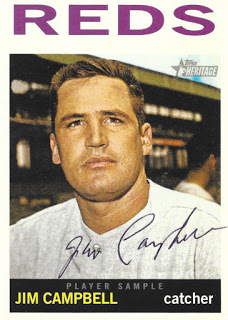 I’d had a nice success with Jim Campbell a couple years ago, but the ’63 I sent came back with a smudged felt tip signature up at the top. When I’d finally tracked down another ’63 via a trade over at TCDB, I wrote up another request and told Jim about the smudged auto. He sent back a nice reply, including answers to the questions I’d written. He didn’t sign the custom card I’d included, but he did add this 2013 Heritage Player Sample card, which was very cool. 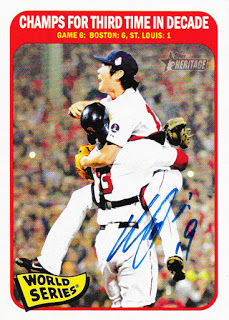 Koji is another current player known as a great signer, and I’d had him on my list to write for some time. I finally dug up this 2014 Heritage card that shows him celebrating after getting the final out of the 2013 World Series, along with a 2014 Donruss – which I apparently didn’t scan. I must have been between scanners at the time. I love adding a great looking card like this to the autograph collection. Thanks Koji!

Four more Astros autographs, including two Hall of Famers! I told you it was a quality over quantity month. Only four more recaps to go.