Boom! April’s report is short and sweet. I wasn’t doing much writing in the spring, as we were doing a lot of baby preparations. I did manage to add two Astros autographs, though. 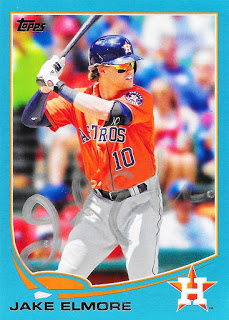 Houston claimed Elmore off waivers during the offseason, and he’d spend 2013 as one of the AAAA Astros, battling it out through one hell of a rough year for us. I like him a lot and had high hopes that he’d improve and grow into the role – he had a decent bat and a good glove. Jake also managed to become one of the few players in major league history to pitch and catch in the same game. On August 19, 2013 he took over as catcher in the 4th inning, then got pegged to pitch in the 8th. Carlos Corporan had started the game, and I’m not sure why he was taken out, but Jason Castro was in the DH spot and I guess Bo Porter didn’t want to lose his DH. So Jake spent four innings behind the plate, before taking the mound in the 8th when Castro was finally moved to catcher. Jake struck out the side on 11 pitches, but the Rangers had put up 11 runs in the 3rd and the Astros dropped a 16-6 stinker. Jake spent most of his time at shortstop in 2013, but he made an appearance at all 10 positions with the Astros that year – yep, even DH. 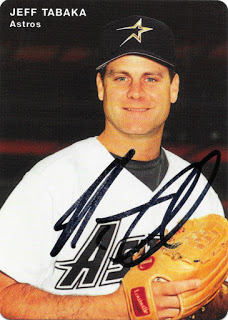 Jeff was acquired in a 1995 midseason swap with the Padres, as the ‘Stros sent Phil Plantier back to San Diego. He’d spend parts of two seasons in the Astros bullpen as the resident lefty middle reliever. I’d picked up his autograph when I nabbed a few of the Astros from the 1996 Leaf Signature Series, one of the first big sets to feature autographed inserts, but I like to keep those certified autos as entries in my Astros collection when possible. He had two other Astros cardboard appearances (three if you count the Tiffany parallel from 1996 Fleer) so I sent off this 1996 Mother’s Cookies.

It might have been a slim month as far as returns go, but I’ll take two new Astros autographs anyday!