by MarcPosted onDecember 24, 2017July 10, 2019
I’m still working through the TTM returns from 2017, as you can see. We’re down to the final two months that I haven’t blogged: May and June. May saw some more quality returns, including a few baseball legends and a two-sport star. Let’s get to it! 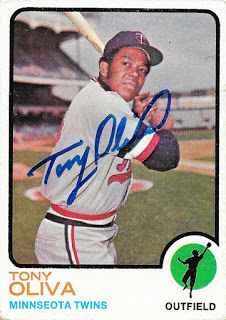 First on the docket was this fantastic return from Twins slugger Tony Oliva. He’s one of the finest ballplayers not in the Hall of Fame, and has been considered by several of the various Veterans Committee incarnations, coming up a single vote short in 2014. The Twins star nearly swept the AL ROY voting after his impressive showing in 1964, and garnered All-Star selections in his first eight seasons. He wont the AL batting title three times, but knee injuries cut short his career. The addition of the DH in 1973 came along at just the right time for him, as his final four seasons were primarily spent in that role.

Tony is one of the legends of Twins history, having his number retired by the club, named to the team Hall of Fame, and even earning a statue outside the new stadium. He’s still an ambassador for the club, which is where I wrote him. I was really excited to get this one back. 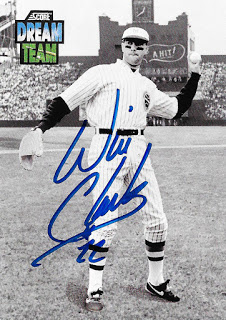 Will the Thrill was one of the non-Astros guys that I absolutely loved watching as a kid. He was a tremendous athlete, and a gritty all-out ballplayer. I thought it was especially cool when he came over to the Rangers in 1995 – that was back in the naïve days when there was no inter-division rivalry and friendly speculation of an all-Texas World Series abounded.

Will’s one of the great signers among the guys I grew up watching, with a fantastic signature to boot. He seems to send back mail three or four times a year, and is an easy get if you send via the Giants. Just make sure you only send one card, or they won’t come back at all. This is the third return I’ve received from Will, and all three are superb looking cards. The 1992 Score Dream Team set was one of the coolest subsets I remember from my childhood, and getting this rad throwback signed was a big hit.

Aw, what the hell. Let’s show off the other two cards I’ve gotten back from Will. They look so good, and I know that good ol’ Nick Vossbrink will dig ’em. 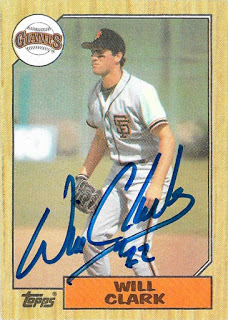 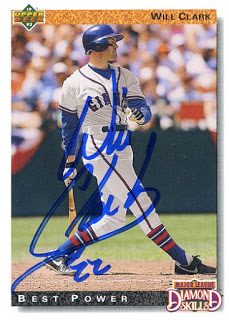 Alright, back to our regularly scheduled programming. 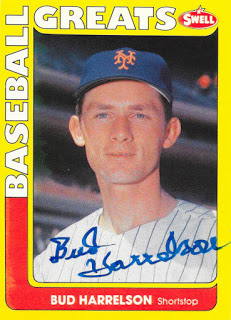 Next on the docket was Derrel “Bud” Harrelson, the longtime shortstop of Mets lore. Bud won two championships with New York – as a player on the ’69 Miracle Mets and as a coach with the ’86 club. The two-time All-Star and Mets Hall of Famer was a slick fielding shortstop with a light bat – a career .236 hitter with just 7 homers in his 15 seasons. His remarks after Jon Matlack shut down the Reds in the 1973 NLCS, when he said, “[Matlack] made the Big Red Machine look like me hitting today,” sparked a brawl in the next game. NL batting champ Pete Rose took particular umbrage with Harrelson’s quote, sliding hard into Bud on a double play. The Mets would go on to win the NLCS in five games before dropping the World Series to the Athletics. 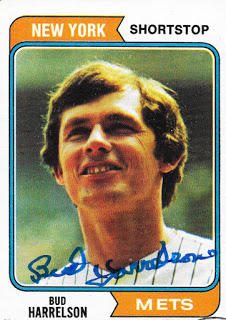 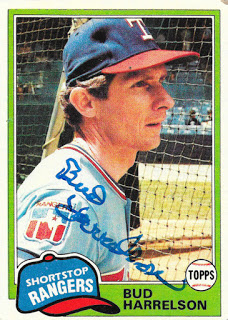 Bud’s been a part-owner, former manager, and now part-time coach for the Long Island Ducks since their inaugural season back in 2000. I wrote him there when the season started and was pleasantly surprised at the quick turnaround. He’s 73 now, so he only coaches during the home games, but he still has his love for the game.

Back in March, a fellow Houston area collector messaged me to let me know he wanted to get out of the game, so to speak. The hobby just wasn’t giving him the same enjoyment, and he wanted to pass his cards on to someone who would appreciate them, and I wound up with a bunch of free cardboard – some of which I need to pass on to you folks, some of which has already gone out, and a bunch of which filled out some holes in my Astros collection. I still need to showcase some of those as well.

Anyway, in those boxes was a nice little stack of cards from the 1994 Topps Archives set – which if you’ll recall was a reprint set of the original 1954 cards with some added “prospects” cards that never were, including a great Roberto Clemente on the Montreal Royals. The Conley on the right here is actually one of the few gold parallel cards that were in the box – the facsimile signature and Braves logo are in gold foil. I’d seen a bunch of returns from Gene, so in my next Sportlots order I decided to track down a vintage card of his, and wound up with the lovely 1957 Topps – which he added a WS Champs inscription to, which is just the icing on the cake. Conley wasn’t just a baseball champion (and four-time All Star), however – he also won not one, but three NBA championships as a member of the Boston Celtics from 1959-1961. 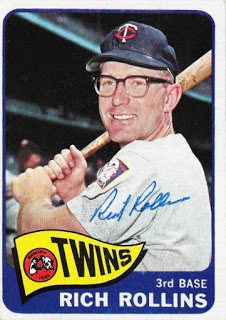 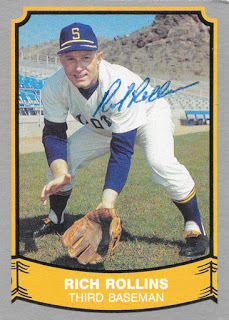 Rollins was one of those guys brought to my attention by the great Pacific Legends sets. He had a ten year big league career, starting with the Twins before moving on to two seasons with the Pilots/Brewers and wrapping up with the Indians in 1970. He had an excellent rookie season in 1962, batting .298 with 5 triples, 16 homers, and 96 RBI – production that would earn him selection to both All-Star games that season and an 8th place showing in the AL MVP voting. He had two more strong seasons in ’63 and ’64 before his production at the plate would begin to fall off and led the AL with 10 triples in 1964.
Rich was a member of the ’65 Twins team that lost to the Dodgers in the World Series, and in 1966 he was one of five Twins to homer in the 7th inning of the game on June 9 against the Athletics. Rollins started the bombardment with a two-run shot of Catfish Hunter, who then surrendered another homer to Zoilo Versailles. Paul Lindblad took over for the A’s and got Sandy Valdespino to ground out, but then Tony Oliva and Don Mincher teed off on him. The A’s brought in John Wyatt to pitch, who immediately gave up a bomb to Harmon Killebrew before finally closing out the inning. That’s five homers among six consecutive batters! 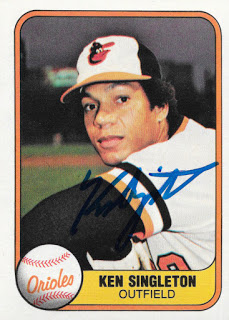 Ken came to my attention through Jonah Keri’s great book on the history of the Expos – in fact, it put a good number of former Montreal ballplayers on my list. The slugger racked up over 2000 hits, almost 250 homers, and drove in over 1000 runs in his 15 year career, finishing with a lifetime .282 batting average, and a 132 OPS+, good for 41.9 WAR. He led the NL with a .425 OBP in 1973, was named to three All-Star teams, and placed in the top 10 in MVP voting four times. 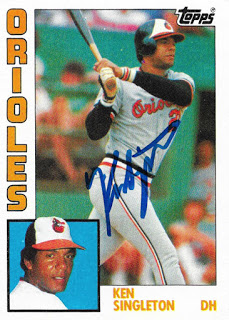 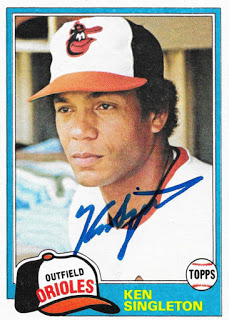 Ken had his most productive years with Baltimore, helping to lead the team to the pennant in 1979 and bring home a championship in 1983. 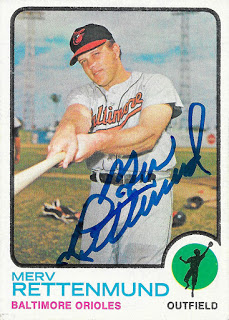 When I came across this spare 1973 card of Rettenmund, I knew I wanted to write to him. Just look at that superb piece of cardboard! If it weren’t for the obvious uniform change, one might think that these two shots came from the same session. Merv’s arms look gigantic in that first shot, too. Rettenmund won a pair of World Series championships, with the Orioles in 1970 and the Reds in 1975, and picked up one more as a coach with the A’s in 1989. 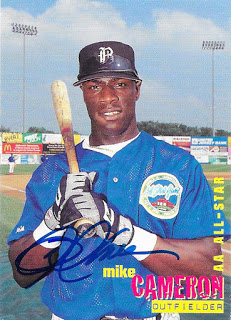 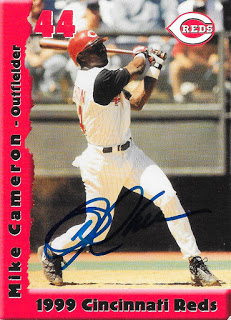 Cameron was the centerpiece of the Ken Griffey Jr. trade that shipped Junior to Cincinnati. Mariners fans probably lamented the deal at the time, but it worked out for the best as Cameron put up excellent numbers over his next several seasons in Seattle and Junior’s production fell off amid his injuries. I picked up that 1996 AA All-Star set on a baseball roadtrip in 1999, and it has some fun names in it, including a very young Vlad Guerrero. The Reds card is from the 1999 Kahn’s giveaway set. I always enjoy adding sigs to these oddball sets. 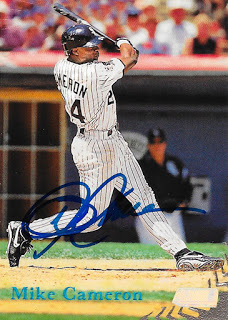 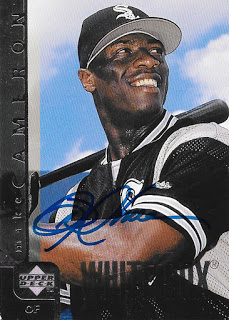 I also sent a pair of Mike’s early cards from his time with the White Sox. The ’98 Stadium Club set is one of my favorites, and that’s just a superb portrait on the ’98 Upper Deck. Thanks Mike! 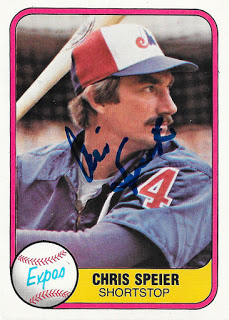 I wrote Chris via the Nationals, where he was serving as Dusty Baker’s bench coach. The shortstop had a lengthy 19-year major league career that started off strong with the Giants in the early 70s. He was selected to three straight All-Star games from 1972-74, and if you don’t absolutely love that glorious 1973 Topps action shot, then I’m afraid we’re going to have to have some words. The ’81 Fleer is pretty spectacular too, with the tri-color Expos hat, the BP warmup jacket, and Speier’s determined stare. 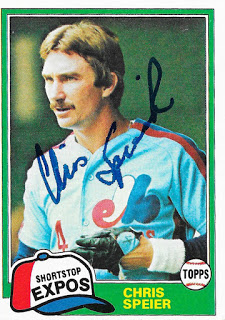 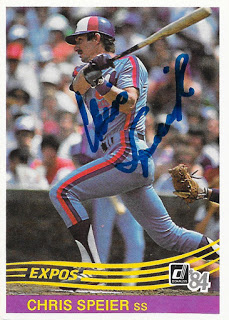 I just dig those Expos uniforms man, I don’t know what else to say. After reading Jonah’s book (Up, Up, and Away!), I’ve got a big affinity for the team, and I hope they get another franchise soon. I sent the ’81 Topps because of the significance of that squad, and the ’84 Donruss because it’s got it all: classic set, sweet swing, stirrups, tricolor helmet(!), and great cropping. 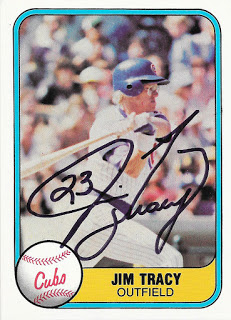 Jim made my short list of TTM subjects due to his Manager of the Year award, which he picked up in 2009 when he took over for the Colorado Rockies mid-season and led them into the playoffs. Colorado was 18-28 under Clint Hurdle, then 74-42 under Tracy that year. Not a bad showing at all. It also didn’t hurt that Jim had a card in the 1981 Fleer set. He spent parts of 1980 and 1981 at the major league level with Chicago, then skipped over to Japan for 1983-84. Afterward, he returned to the US and managed in the minors. 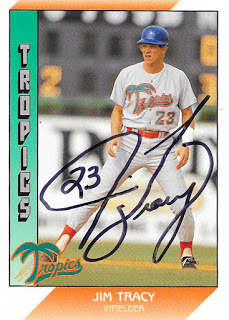 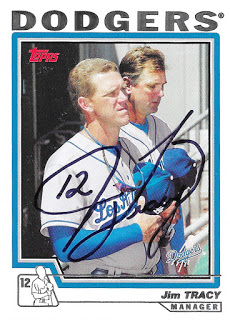 As you can see, Jim was also a member of the short-lived Senior League, something that I would have eaten up if I was a Florida kid when this was around. I hadn’t planned on adding a third card, but when I did a quick TCDB search of my collection, I dug up the ’04 Topps depicting Jim at the helm of the Dodgers. Gotta send a Manager of the Year a manager card if you’ve got one, right? 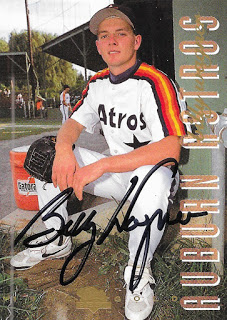 Billy Wagner: 1/1, 41 days.
We close out May with good old Billy The Kid. I’ve got numerous autographs of his from when I was a kid – he was always a generous signer at games and would even chat with me before games at the ‘Dome down at the bullpen. Billy’s another childhood hero who popped up in the reported returns, so I pulled out a sweet dupe and dropped him a line. This is a 1994 Classic Best Gold card featuring a fresh-faced Billy straight out of Ferrum College and in his new short-season A ball Auburn Astros uniform.

The really nice thing about this autograph is that it’s not one of the shorter rushed signatures that guys sign at games – of which I have several from Billy. This, however, looks like the really early signatures that he’d sign, which is super cool. I may have to dig up a few more cards to send off to him in the new year.

Just one more month of this left to go – are you excited?