Another month has come and gone – that means it’s time for the TTM Report! Let’s see what rolled in during the month of November. 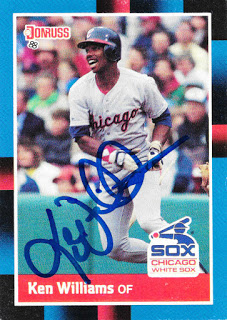 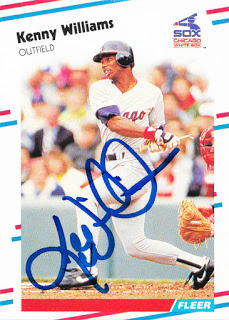 While Williams came up with the White Sox, he’s best known for being the general manager while constructing the club that swept my Astros in the 2005 World Series (goddamnit). Williams best/most entertaining move was probably hiring Ozzie Guillen to be manager – who didn’t love the world of Oz that ensued? Mr. Williams held onto the Score Young Superstars card I was hoping he would sign – they were glossy inserts put in fat packs/rack packs if I recall right, and I think they’ve got a sweet design. I’m not complaining about it though, as these two rookie cards look great. 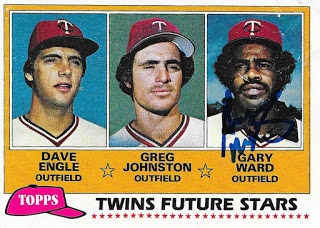 Ward came up with the Twins and was an All-Star outfielder with Minnesota in 1983 and the Rangers in 1985. He played 10 games in 1979 for Minnesota, and 13 in 1980. What’s notable about that? Well, in his fourth big-league game in 1980, Ward hit for the cycle. That’s right, in just his 14th game of his career, he achieved one of baseball’s celebrated (if somewhat dubious) feats. His mark of 14 games is still the record for the fewest games played for a player’s first cycle. 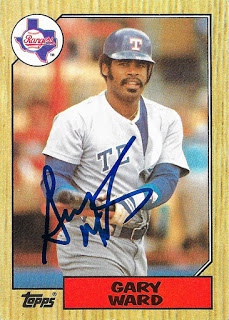 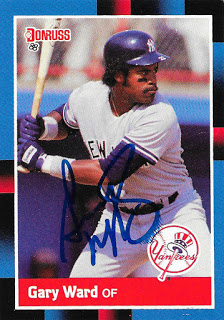 You might also know about Gary’s son – Daryle. The big lefty, who came up with Houston, also hit for the cycle, in 2004, making the Ward’s the only father-son duo to accomplish the feat. I do love me some baseball family autographs, so it was nice to add Gary’s signature to my collection. 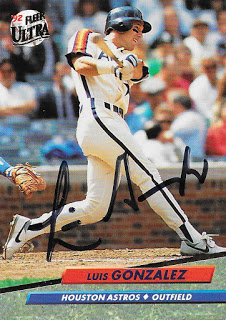 Gonzo! I freakin’ loved this guy. He was another one of the young stars of the Astros in the early 90’s. Luis actually came up through the Astros system as a first baseman, moving to left field to accommodate some mullet-wearing prospect the club stole from Boston, who himself moved across the diamond because third base was blocked by one Ken Caminiti. God I miss that team. 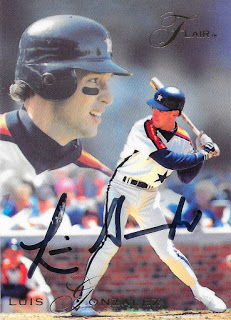 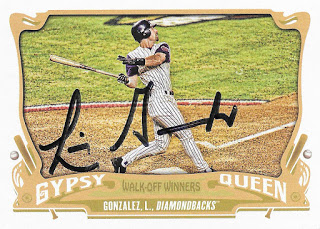 Of course, Gonzo would go on to heroically hit a squibber that won the ’01 World Series for Arizona. I’ve gotten several sigs from Luis over the years, but he’s a fantastic signer and I thought this batch would look rather good with some ink on them. These were sent c/o the Diamondbacks, where Luis is still working as an ambassador/Special Assistant. 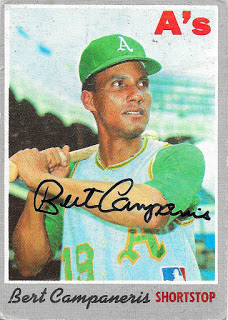 Woohoo! Another nice vintage score. My first attempt with Bert Campaneris led to a pair of nice signatures, but I’d learned from scouting the TTM returns at Sportscollectors.net (fabulous site and well worth the money if you’re going to start doing this thing) to only send a pair of cards. But then I found this great 1970 Topps, and thought about how nice it would look signed – pretty great, right? I’d sent along a 1973 World Series highlight card as well, featuring him running on the basepaths, but he didn’t sign that one. I may try one more time. Still, this is another great success from a fabulous shortstop. 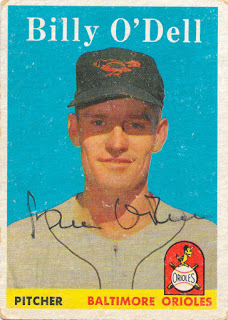 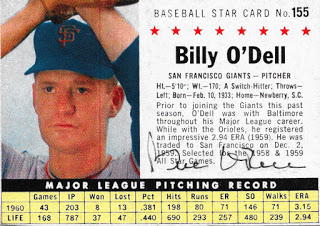 Billy O’Dell is another one of the great older signers, something I’d noticed from SCN. “Digger” pitched 13 seasons in the majors, making All-Star teams in 1958 and 1959. In 1962, Billy won 19 games for the NL champion Giants, though he fared less well against the Yankees in the World Series.


This is your daddy’s Ed Sprague. Well, would have been my dad’s Ed Sprague, had he played for the Pirates. The elder Sprague pitched for Oakland, Cincinnati, St. Louis, and Milwaukee throughout his 7 year major league career. Knee injuries ended his best season early in 1974, and he hung up his spikes after 1976.

Sprague would go on to buy the Stockton Ports – currently Oakland’s Class A Advanced affiliate, though I can’t determine if he still owns the team.

Ed’s son, Ed Jr., would go on to have the better career of the two, playing 11 seasons, winning a pair of championships with Toronto, and representing Pittsburgh in the 1999 All-Star game. I still need his autograph for my baseball family collection. 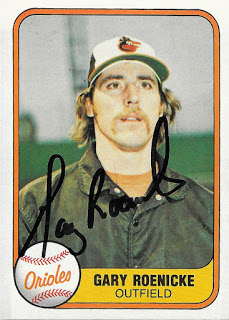 
Let’s keep that baseball family train a-rollin! Gary is my first Roenicke signature. His brother Ron and son Josh also spent time in the bigs – with Ron also holding down the Brewers managerial gig from 2011 – early 2015.

Ron’s best time was spent with the Orioles, where he played on the 1983 World Series championship team. He’s a member of the Orioles Hall of Fame, and is still a scout for the franchise. 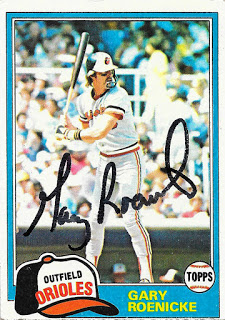 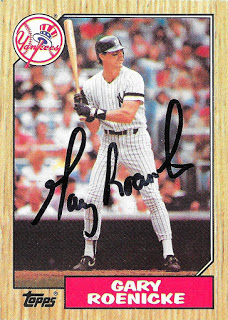 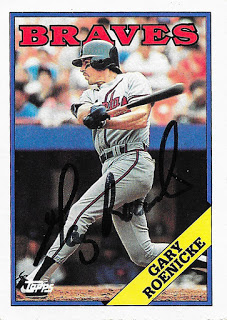 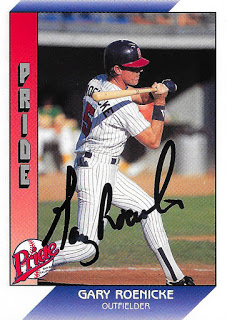 Roenicke wrapped up his career with stints in New York and Atlanta, and both he and Ron spent time in the short-lived Senior League, where they were teammates for the first time (well, perhaps in high school, I’m not certain) on the San Bernadino Pride. Oh, and today is Gary’s birthday! Happy birthday Gary, and thanks for the ink! 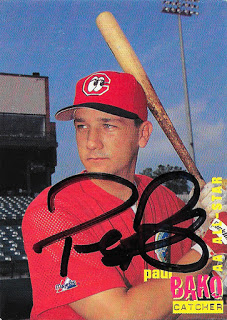 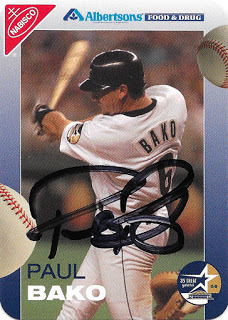 This Paul Bako request is the fifth longest return I’ve had since I rejoined this part of the hobby back in January 2014, clocking in at just under 16 months. You wouldn’t think that a short-term backup catcher would mean as much, but this request is particularly great due to the cards involved. The 1999 Nabisco Albertson’s set replaced the beloved Mother’s Cookies sets, and was only around for one year. It yielded a few of the only Astros cards for a few guys, including Bako and former bullpen coach John Tamargo. That means I can finally add a signed Astros card of Bako to the collection. The other card is from the 1996 Best AA All-Star set, which I picked up at some ballpark when we were on a minor league road trip. It’s a great set, complete with a young Todd Helton and one of Vlad Guerrero’s first cards, and I have a few of them signed. Adding another is always fun.

But, for the big bad mamma jamma return from November…

you’ll have to scroll a little farther…

because I netted a super-duper hella awesome return… 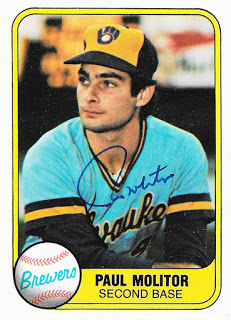 Yes indeed, I netted a bona-fide Hall of Famer, one of the best hitters to play the game, and current AL Manager of the Year (whatever that’s worth), PAUL MOLITOR.

This is the third time I’ve sent this very card to Paul. Each time it comes back in my plain white SASE, alone, no note, no message.

But this time it came back with ink on it!

I mean, what more needs to be said, right? Definitely one of my best returns of the year.

Alright, I’m off to try and write a few trade posts – lots of catching up left to do for 2017, and more trades are arriving. That’s what you get for sending out cards, I suppose!

May your mailbox be full of wonderful cardboard,