It’s HASHTAG HOT TAKEZ TIME in our world right now. Between the HOF voting announcement tomorrow afternoon and the impending release of the 2018 Topps flagship set, there’s a whole mess of opinions out there.

You want my opinions? Well too bad, here they are.

I don’t like this year’s flagship design, so much so that I’m not even going to bother chasing down a sample image. It’s boring at best, and blah photoshoppery at its worst. The slide thing is dumb. The digitization trail at the end of the nameplate is dumb. Topps should spend a little time trying to evaluate what made their iconic designs iconic, and try to base their new designs somewhat off of that. Leave your digitization trails and photoshop gimmicks for the inserts and the ten other modern sets that you’ll put out this year.

I haven’t even seen a card back yet, but I heard rumors of incomplete career stats. I’m not a fan. Apparently there are still social media handles on them as well. Hey Topps: that’s not going to age well.

What I have seen, out in the card blogosphere/twitterverse is some grumbling that Mike Trout is once again on the packaging. Guys, I know Trout has the personality of pool noodle, but he is the best player in the game. He’s our Griffey, if Junior had an affinity for airplane travel and weather reports. Sure, maybe Kris Bryant is a better lovable face of an awesome ballplayer who has some personality. I doubt people would stomach Harper on the package well, even though his #MakeBaseballFunAgain motto is really what the game ought to be embracing. Hell, if we want to really get out there – put Altuve on the wrappers. Top five ballplayer with oodles of personality and lovability. I might even buy packs then.

Now to the other topic. The HOF ballot. Two things you should know: First, I’m a “Big Hall” guy. There are so many deserving guys. Yes, an extraordinary DH or three ought to be elected, eventually. Yes, elite closers probably have their place. Second, I think people taking a hard line on “steroid guys” is by and large dumb, mainly because pretty much EVERYONE YOU LOVE USED GREENIES OR SOMETHING ELSE (sorry to ruin everything you hold dear).

I’m really not going to get into the weeds on my ballot. Also, I’m going to go past 10, because Big Hall and all that, but these are in order.

No Manny? Don’t get popped multiple times after testing has started. No Crime Dog? I honestly should evaluate him more, but he’s borderline. No Slammin’ Sammy? Peak was too short and overall too one-dimensional. No Andruw Jones or Omar Vizquel? Elite defenders, but Andruw got sidelined by injuries and Vizquel is a true compiler offensively.
Anyway, that’s more than I’d planned to say. We can’t have a post without some cards though! Here are some quasi-recent additions. I actually gained possession of these a year ago, when I got a bunch of free cardboard from a guy getting out of the hobby. I still have some of it I haven’t been through yet, but I need to start showing off some of the highlights of what was in the boxes. 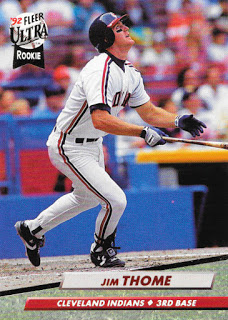 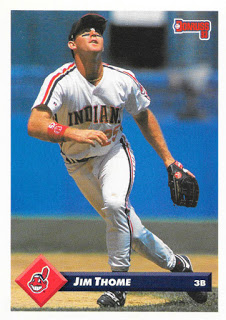 First up tonight is a pair of early Jim Thome cards. From the look of things, he’s a lock for election tomorrow. 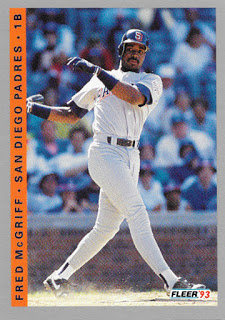 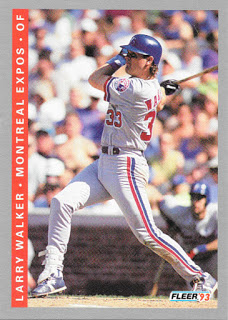 And we’ll close with a pair of ’93 Fleer. Neither of these guys are going to get a phone call tomorrow, though the one on the right absolutely deserves it. Just look up his non-Coors numbers if you need some confirmation. I’m still undecided on McGriff.