by MarcPosted onJanuary 30, 2018July 10, 2019
Okay, I want to try and keep things rolling at a good clip around here, so let’s dive back into the flat rate box that Adam sent and see what other awesome cardboard I found. 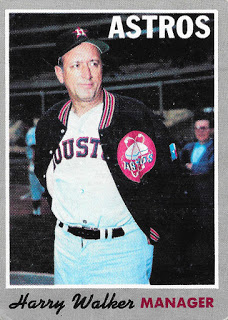 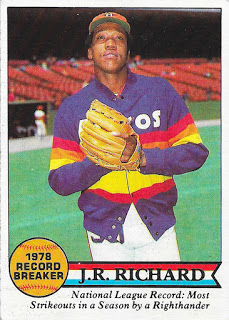 Sweet vintage glory! These were the only two cards in the box dating back to before the ’80s, and while I’ve already got copies of these two lovely issues, they’ll go towards what will inevitably be a very long slog of a 1970 set build and my new J.R. Richard PC – I mean, his cards are all Astros cards, but I’m breaking out the doubles and trying for a second set. 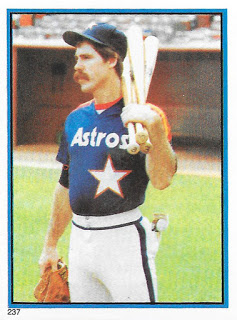 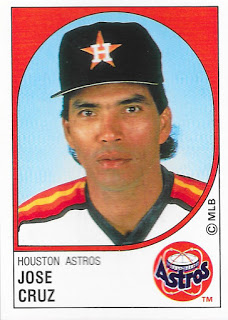 There were some lil’ stickers in there as well – an ’83 OPC Phil Garner sticker (the only other thing in here older than I am) and a Jose Cruz from the ’88 Panini sticker set. 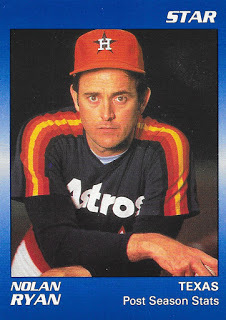 Are you ready for some sweet Nolan Ryan action? I sure hope so, because these two oddballs are just the beginning. The Purina card (back from when Ralston Purina put out cereal) actually has a variation that is missing the “1987 Collectors’ Edition” text in the upper right corner, so that’s on my radar now. The Star card comes from one of the 11 card single-player sets that they put out, this one from 1990. 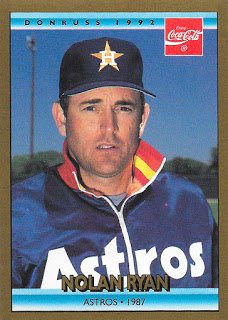 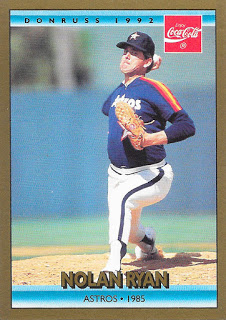 In 1992, Donruss put out an oddball Nolan Ryan set distributed in packs of Coca-Cola. It spanned 26 cards, one to highlight each of the then 25 seasons under his belt and a classic card of Nolan in his cowboy hat, of course. I had copies of these already, but I’m working on the whole set as well as a second crop of the Astros cards for the team binder, so these were still needed additions. 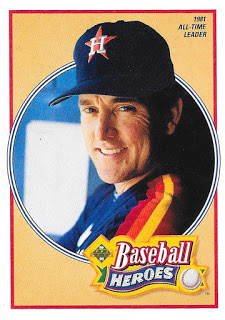 Here’s yet another Nolan card I had, from the 1991 Upper Deck Baseball Heroes inserts. However, my other copy is a slabbed version that someone sent over in a trade, so this one slipped into the team binder. 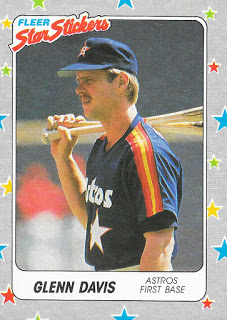 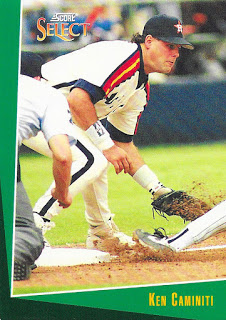 Here’s a pair of sluggers. Gotta love Davis with the multiple bats on that 1988 Fleer Star Stickers card, and I always love a good Caminiti, particularly one I didn’t have already. I just wished they’d made this a horizontal so that you could see more of the play. 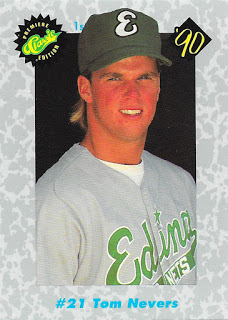 Baby ‘Stros. Nevers was the first round pick in 1990, but wound up as a career minor-leauger, spending 13 seasons (parts of 4 at AAA) there. I had no idea that Classic Draft Pick set was around in 1990 – it is of course gloriously period appropriate. I racked up another Gold Winner from ’92 Topps with this Scott Servais, and I think it puts me over 50% of my needs for the Winners team set. 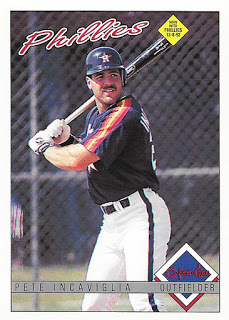 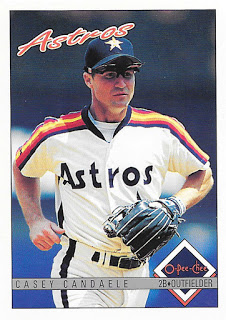 Woo! A couple of my childhood favorites from the great ’93 O-Pee-Chee set, including a Sneaky ‘Stro in the Incaviglia. 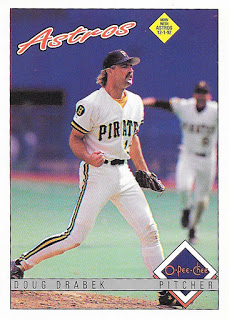 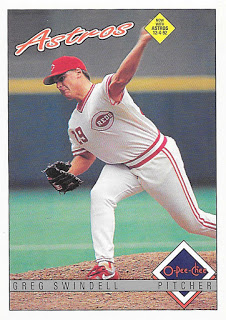 There was another pair of Sneaky ‘Stros in the package as well, albeit less sneaky as these officially fall under the team checklist on TCDB, whereas the Inky doesn’t. These were big additions in the 1993 offseason, and I think the team held a press conference introducing the two of them on the same day. If I can make out that tiny text, the signings were just three days apart. 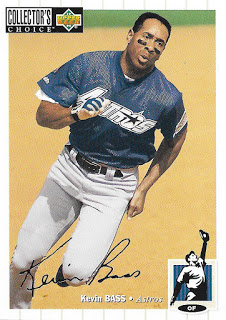 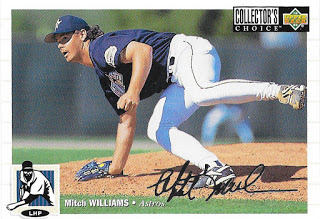 Oh yeah, Silver Signature parallels from 1994 Collector’s Choice. I’ll maintain that this was one of the best cheap sets of my youth. I’m starting to make good progress on these as well. 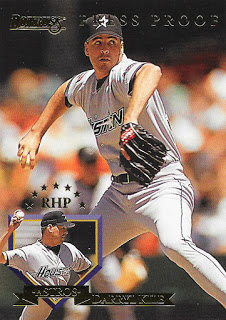 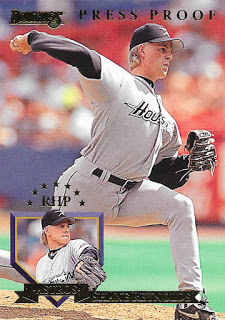 These were a really neat find in the box. The first run of 2000 sets for 1995 Donruss were marked as Press Proofs and specially designated on the back. These are the first of the Press Proofs that I’ve come into from the set. 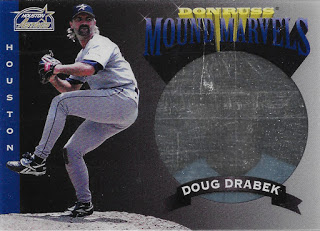 There was also a super-slick Mound Marvels insert of Doug Drabek from ’95 Donruss. While you would think that the circle just doesn’t scan well – in actuality it’s supposed to be viewed from the reverse. And yet it has a banner for his name. Hm. The Mouton is another Cyberstat parallel from 1995 Topps. This box was parallel crazy! It was awesome. 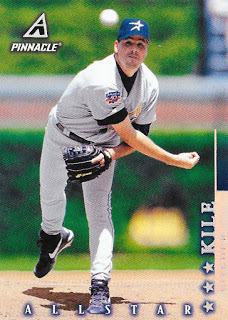 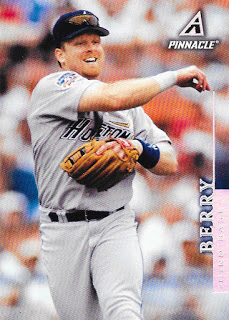 Ah, some more 1998 Pinnacle. Looks like I can finally put to rest my chase for the base team set with this Sean Berry, too. 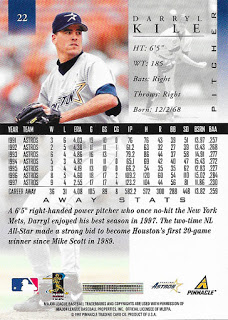 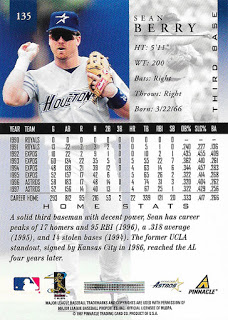 Nope! These two are more of the Home/Away stat parallel varieties. I already have the Away Berry, so now I just need the base. 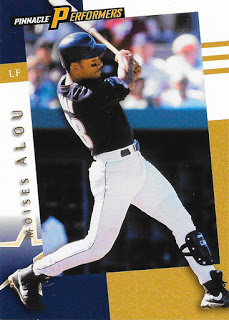 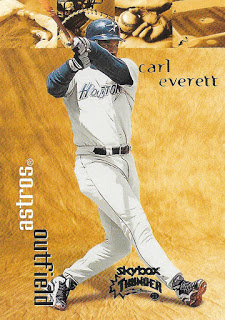 We’re going to call it a night with the end of the ’90s here. The Pinnacle Performers was a nice set from 1998 that I don’t think made the rounds, really. I remember buying a lot of 1999 Skybox Thunder, though. It was a great cheap set.
As always, thanks for the cards Adam!
– Marc