This post marks the final entry from the card show two weeks ago. I told you it would take several posts. However, this also marks the debut of a new series that I’ve been planning to start for a while now. I still have plenty of trade catchup to do (it’s looking like end of March will be the actual completion date for that), and I’d been planning to shelve this series until that was over. However, this card show find expedited its arrival.

Without further ado, welcome to All Them Astros. This series will appear once I’ve collected all the cards in an Astros team set. That could be a base run from flagship, or even as little as a one single Astros card from an insert or oddball set. Today, we begin with a rarely seen team-issued set: the 1999 Astros Buddies Club set.

This is a five card set featuring four of the greatest names in franchise history, featuring a decorative border and sepia-toned photos. Given that it’s a really small set, I’ll be presenting fronts and backs for the whole run. The backs feature a bio of career highlights and a single line of cumulative career stats. These sets were issued in a sealed plastic sleeve and given out to members of the Astros Buddies Club – a kids fan club for those up to age 15 I believe – in their annual package of goodies. Perks included vouchers for 5 home games, some team swag, possibly a discount at the team store, and a special kids-only autograph line at the annual Fan Fest. I know all of this, of course, because I was a bona-fide member. 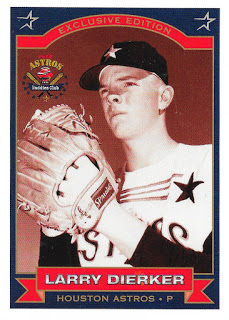 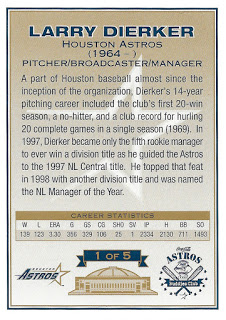 Larry Dierker, then the team manager, leads off the series. Dierker pitched 14 seasons, the first 13 with Houston before wrapping up with the Cardinals in 1977. That stint included a 20 win season in 1969, two All-Star appearances, a no-hitter, and leading the league with 20 wild pitches in 1968. After retiring, he joined the broadcast booth, and was named manager of the team in 1997. If you can read the tiny type on the back, you’ll have gathered that he had led Houston to back-to-back NL Central Division titles in ’97 and ’98. While Bill Virdon may have the best record among Astros managers, Dierker was certainly the most successful one by the time he was finished. That may have been surpassed by Phil Garner’s tenure, and I’d argue that A.J. Hinch seems primed to take the title if he has several more good years. Dierker has been a franchise mainstay almost from the inception of the club, and has had some sort of role for nearly the entire history of the team. 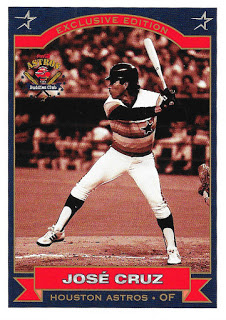 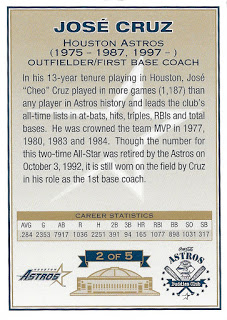 Second in the set is José “Cheo” Cruuuuuuuuuuuuuuz, long-time Astros outfielder and at that point the most valuable player in franchise history. Jose held the club record for games played, at-bats, hits, triples, RBIs, and total bases. Those numbers have since been broken by a trio of Killer B’s. Cruz had returned to the club to serve as Dierker’s First Base coach, a position he would hold until Brad Mills took over as manager in 2010. Cruz stuck around through four managers: Dierker, Jimy Williams, Phil Garner, and Cecil Cooper, and even saw his son Jose Jr. finish his career with an uneventful return to the city where he grew up. 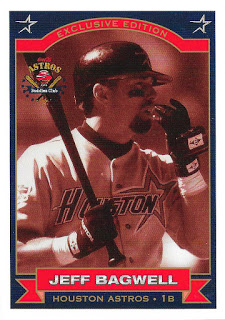 Of course, the two big names from the franchise are the other two players featured. You know full well who these guys are, so I won’t go into too much detail. They’re the first pair of lifelong Astros (perhaps the last, given the way free agency has changed) to go into the Hall of Fame. Bagwell was the first Rookie of the Year and league MVP in club history, and my boyhood hero. What more is there to say?

I love the photo of Biggio tearing around third base, his teeth clenched and uniform dirtied in true Biggio fashion. That guy always played at maximum effort. In Bagwell’s photo, you can see the giant pad he began wearing on his wrist after getting plunked twice and missing time. His 1994 MVP season actually ended about a week before the strike due to his wrist being broken by a pitch. 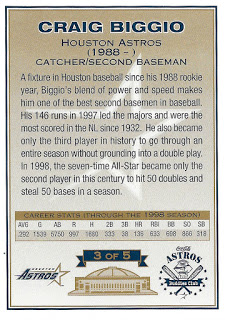 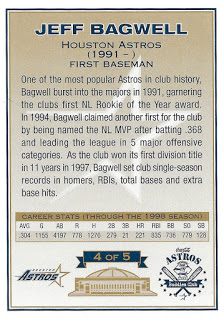 Let’s talk design for a moment. I think the fronts are just superb, even with the crazy Coca-Cola Astros Buddies Club logo jammed in there. The ribbon, the “Exclusive Edition” notation, the doubly-featured shooting star logo – it just sings. It’s a perfect team release. Hmmm… I may have to do a little photoshop magic before too long. The backs might be even stronger, with the # of 5 numbering and that little Astrodome logo. 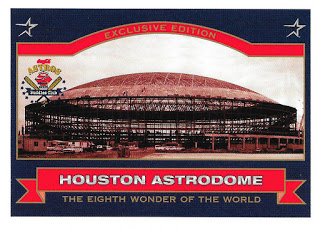 Speaking of the ‘Dome, it gets a fitting tribute on the final card of the set. Perhaps the coolest thing is that they chose to use a photo of the stadium under construction, giving you a great look at the bones of the structure. I have to admit, this blew my little 15 year-old mind when I first saw it. 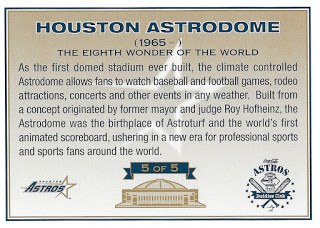 1999 would be the final year that the Astros played in the Astrodome, a truly revolutionary stadium when it debuted. Obviously, the “Eighth Wonder of the World” was the first domed stadium in history, but it also brought us the animated scoreboard and of course, turf fields. Fun fact: AstroTurf was originally called “Chemgrass.” The need for turf arose when the grass died due to the fact that they had to paint a large wedge of the stadium’s skylights as fielders were completely losing sight of pop-ups and fly balls.

This is actually my second set of these cards – I received my first set when I was still a card-carrying Astro Buddy. I managed to get the Dierker and Cruz cards signed at games – probably shortly after the cards came out – and the Bagwell and Biggio cards both made their way into the respective player binders. Thus, when I saw this in a box of team sets – I almost missed it due to its tiny size, I was ecstatic. It was at one of the first tables I stopped at during the show.

So there you have it, the 1999 Astros Buddies Club set, a fitting inaugural entry for All Them Astros if I ever saw one. I plan to finish off these posts with notations of variations, parallels, and other related sets, as well as what I may still be missing from them. Seeing as how this is all there was, though, that’s it. So just for kicks, here are some scans of the Dierker and Cruz autographs. 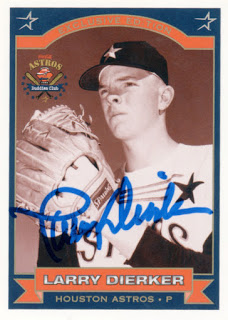 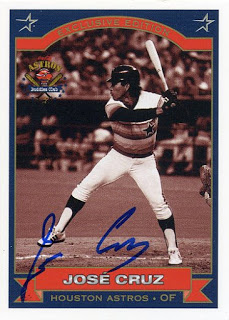 4 Replies to “All Them Astros: 1999 Astros Buddies Club Set”