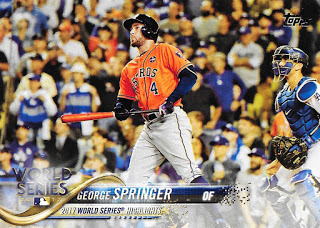 February has come around, which means a couple of things. First, I can turn the heat off for at least the next 9 months. Second, we’re just a couple weeks away from all of our large adult sons reporting to mostly meaningless workouts which indicate that our beloved based ball is inching closer to another season. And third, but not finally, it’s time for Topps Flagship.

I said I wasn’t going to do it, but hell – I was in Target for baby stuff (which oh my goodness if I could accurately tell you the frequency with which that happens) and thought, “I’ll just grab a pack.” 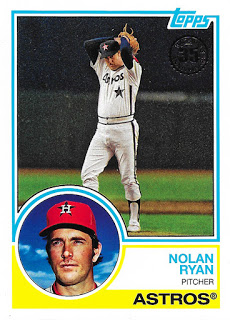 So, I dropped the obligatory hanger box and a pair of rack packs into my basket on my way to the checkout, and voilà – my Series 1 purchasing is done for the year. I’m a bit surprised at just how much I enjoy this design, tidal wave / toothpaste / waterslide thing be damned. It’s certainly better than the previous two years of bad designs. Flipping through the cards, I think the biggest key is that (a) they feel just a tad more vibrant and (b) the photo selection is actually really quite good – exceptional for a recent flagship design in fact.
I’m not going to show off a bunch of cards, because I really don’t feel like scanning tonight, and you’re all going to do it anyway too, so I’ll just leave it to one of the four Astros base cards I landed, depicting George watching his Game 7 dinger all the way to the seats. I also got his regular base card, Josh Reddick, and Yulieski Gurriel. This faux 1983 of Nolan was the lone Astros insert I landed. I’m a little disappointed these are on the new glossy stock, but I don’t want to complain about it. The worst thing I can determine about the set this year is that there are parallels for pretty much all the inserts, which is just insane. Who cares about them that much? We don’t need those.
I do need these, however, as well as any Astros inserts. If you pull a spare few, hit me up, would you?
30 Carlos Correa
39 Alex Bregman
128 Jake Marisnick
154 George Springer
182 Alex Bregman
184 Mike Fiers
212 Lance McCullers
215 Marwin Gonzalez
294 Jose Altuve
298 Houston Astros
333 Joe Musgrove
341 J.D. Davis
Happy Flagship Day everyone, and watch that first step. It’s a doozie.