by MarcPosted onFebruary 9, 2018July 9, 2019
You guys, after an incredible run in January, I have hit a bit of a wall this month. I’m getting a bit tired of the monotony of trade posts, and saying that I’ll get caught up on everything. I mean, I will, but I can’t just slog through the folders in order anymore. It’s driving me crazy.

So I took a break for a few days. I wrote some letters for autograph requests, including a few big ones that I hope pan out. I sorted and scanned some cards that came in recently. I got a few TTM returns. I made some customs, and resolved to actually post about the damn things on the blog sometime soon. I started reading Ball Four, finally.

And then I decided I wanted to knock out some more posts. This one is a trade that came in from everyone’s favorite non-blogging vintage cardboard-doling pal, Mark Hoyle.  He sent over a lovely package of oddballs back in late September 2017. 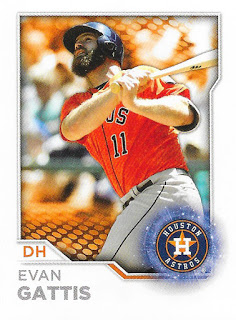 As the title of this post implies, they ran the gamut when it came to size. Starting as small as this 2017 Topps Sticker, in fact. I was also happy to add this 1990 Panini Biggio sticker to the binder as well. It’s slightly smaller than your standard card. 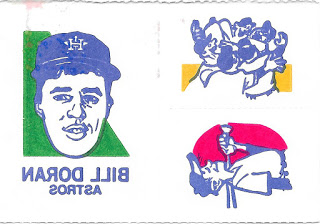 This ’84 Topps Tattoo panel is card-sized, I suppose. I have a few full sheets of these from when I stumbled across some packs. I think I’d like to eventually find full sheets and individual panels of all the Astros. Welcome home, Bill Doran! 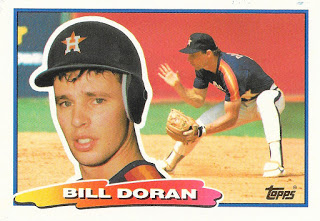 And speaking of Bill, here he is on a 1988 Topps Big card. We’ve ventured into oversized territory now. 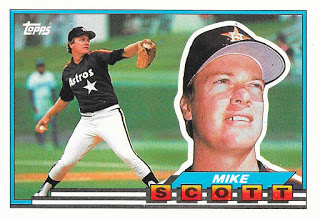 Mike Scott’s 1989 Topps Big card keeps us at that size for the time being. 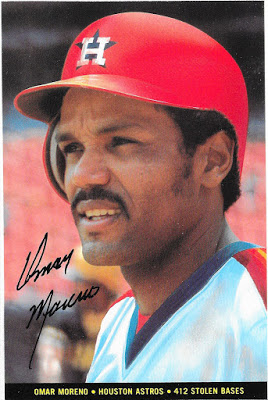 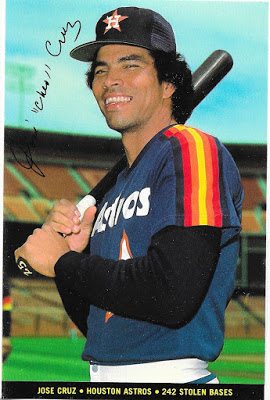 These are what sparked the trade in the first place. Mark had posted on Twitter that he’d come into some 1983 Topps Foldouts that he was going to clip the Red Sox from and offered up the others. This was a “five card” set, with each card featuring 9 double-sided panels for a total of 17 players (and a cover panel). Cards in the set included the following subjects: Career Wins, Home Run Leaders, Batting Average Leaders, Relief Aces, and Stolen Base Leaders, the last of which featured two current Astros: Omar Moreno at 412 and Jose Cruz at 242. Each panel is roughly postcard sized. 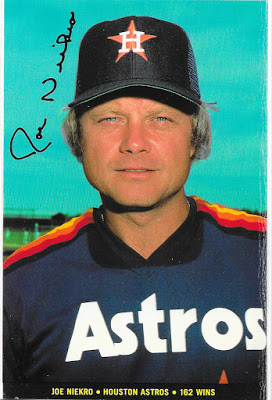 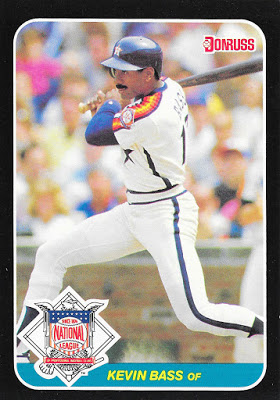 The only other card in the foldouts to feature an Astro is the Career Wins Leaders card, which has Joe Niekro and Nolan Ryan. Nolan must have had a Red Sox player on the other side, because it’s the only one I’m missing. I’d like to pick up full paneled cards of the Wins Leaders and Stolen Base Leaders eventually. The Kevin Bass is from the 1987 Donruss All-Stars set, back when those were still oversized 3 1/2″ x 5″ cards. 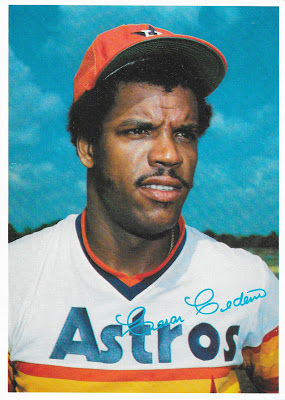 Finally, we get to the grand master of the envelope, a 1980 Topps Superstar Photos Cesar Cedeno Gray Back version. This baby clocks in at nearly 5″ x 7″ in size, and was a really cool addition to the collection. It also killed my set needs for the Gray Backs, as I’ve already got Nolan Ryan and J.R. Richard “cards.” Now I just need the White Back versions of all three. 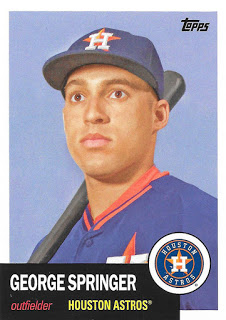 There were also a few regular sized cards in there as well. It’s hard to believe that I hadn’t come into a copy of that 1991 Studio Biggio by now, but I can finally check this team set off my list. Or, well, I checked it off last fall. Side note: I just realized that Biggio’s bat is facing down in this shot. He used one of those no-knob bats that just tapered back out at the end, very old school. And what better way to close out this package than with my boy, George Springer, looking like a space cadet on this Archives card. Come back to Earth, George! It’s time for spring training!

Thanks again for the package, Mark!