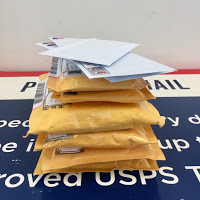 Ohhhh, man! Blogging (and blog reading) time has been hard to come by as of late. That doesn’t mean the cardboard hasn’t been rolling in, though, and that means I have even more posts to catch up on!

Cardboard has also been flowing out here as well, which is good, as I’m determined to send away more cardboard than I take on this year (and send away a lot if I’m lucky). Today was mailday at RTA HQ, as you can see. My tiny assistant isn’t great for office productivity, but she did help me get this stuff to the post office, and got lots of smiles along the way.

One of the recent packages to arrive at the ‘Dome doorsteps was from none other than that scalawag, Matt of Bob Walk The Plank. We hadn’t exchanged volleys in some time, but Matt struck a blow with this one. It only had five cards in it, but in true BWTP fashion it was loaded. Unfortunately for Matt I just sent off a bunch of Bucco goodies to Mark at Battlin’ Bucs, so I’ll have to reload before I can return fire. 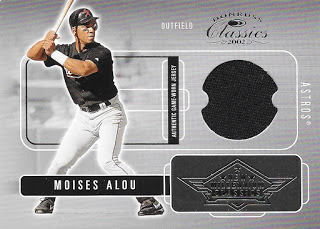 First up was a lovely Moises Alou jersey relic from 2002 Donruss Classics. Alou was a beast here, a very productive player who lost a year due to an offseason treadmill accident, but still incredible. He’s top of the charts for batting average when it comes to ‘Stros, and I don’t believe I had any relics of his before this. Very nice! It’s numbered 6/500, by the way. 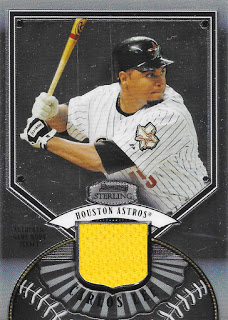 Up next: a lovely yellow Carlos Lee swatch from 2007 Bowman Sterling. I figured this had to be some sort of insert, but it’s actually a base card! Given that Lee spent most of 2006 with the Brewers, this is likely a Milwaukee swatch, but it could very well be from his 2006 NL All-Star jersey. Either way, a fun addition. 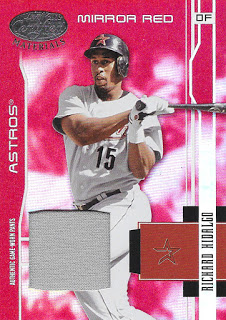 Oh boy, parallel materials baby! Sure, that’s a plain gray swatch, but check out that card: a Mirror Red parallel from 2003 Leaf Certified Materials! This is truly lovely, and numbered 64/250. 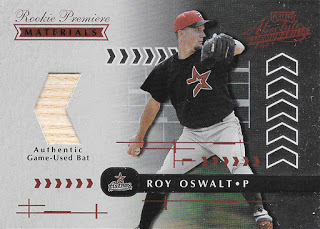 Matt didn’t stop there, though – next in the proverbial bag of goodies was a Roy Oswalt bat relic from 2002 Playoff Absolute Memorabilia. As a hot prospect, Oswalt got one of the high number relic cards that appear in the end of the base checklist. Roy was so fun to watch during his time in Houston, and this card is just fabulous in hand. It’s numbered as well, 315/700 – that’s a lot of tiny bat chips. 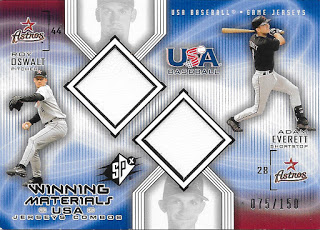 Finally, card five in the package was not only another relic, but a dual relic! Yeah, sure – these tiny little white squares of jersey next to the also tiny little player images aren’t too fancy, but that’s a Roy Oswalt / Adam Everett dual relic out of 2003 SPx. Not only that, but if you can make out that foil numbering among everything else going on with this crazy card, you’ll see it’s #75/150. Supposedly this celebrates their time with Team USA while also happening to be an Astros card. Whatever, it’s totally nuts and awesome, and I love that I have it.

Thanks Matt! I’ll have to see if I can find any sweet ‘Buccos stuff for you.

0 Replies to “Avast, I’ve Been Planked!”