Time for another post featuring some of last year’s pickups. I guess that makes this title more apropos than I thought. Back in May, I’d made a stop into the LCS at some point, because that’s when I scanned these. I’m not sure what else I’d picked up – I probably rifled through the vintage boxes looking for some TTM fodder, and perhaps I bought a couple packs of new product. I made sure to do my customary check of the box of packs that are either $1 a pop or more excitingly 25 cents each. One trip led me to a nice score of 1999 Topps Gold Label packs at the former price.

These, however, were of the cheaper variety. I’ve got a special love for minor league cards – you never know what sort of good stuff you might turn up, so I grabbed the entire stack of 1991-92 ProCards Tomorrow’s Heroes. I’d picked up the Kenny Lofton somewhere along the way, so I’d seen this design before, and boy is it something. 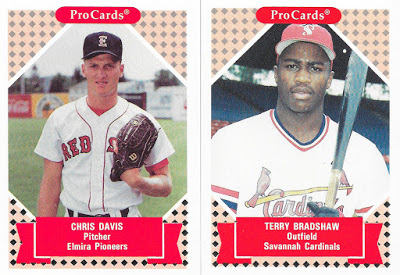 Look! I got Chris Davis and Terry Bradshaw! Those are some big names. Wait, what? What’s that you say? Not the guys I’m thinking of? Oh well.

Let’s talk design for a minute – these have some fairly standard ProCards looking backs, but the fronts are much zippier than usual. The diamond pattern on the lower half of the card is actually foil, hency why it looks so much darker than the top. The foil is a real nice touch in hand. 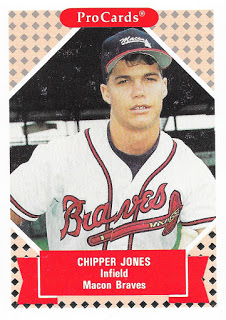 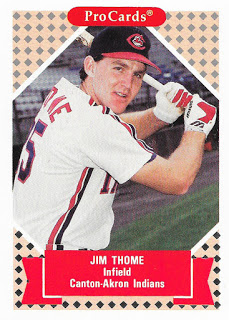 I did land some genuine big names. Pre-rookie cards of two new Hall of Famers? Yes, please. I’ll be filing these away in the keepers. Look at how positively tiny Thome’s arms are! That would change in a couple years time. 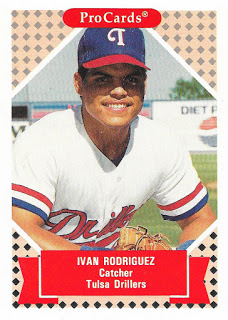 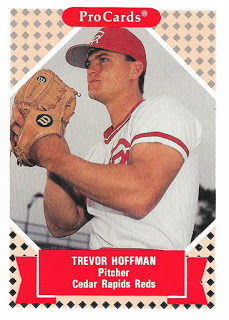 Two more recently elected Hall of Famers! I was floored when I found Pudge staring back at me in one of the packs. I’d almost totally forgotten that Hoffman started off as a Reds prospect. I have a few of his early Marlins cards, but his Reds days have eluded me. Keepers here as well. 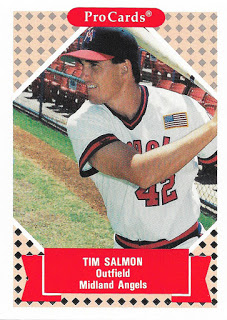 Oooh, a pair of hot Angels prospects! Pretty sure I sent at least one of these off to ol’ Tom at The Angels, In Order. 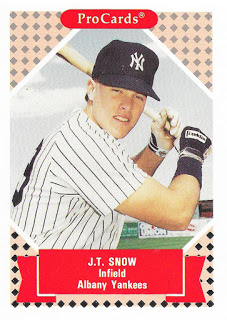 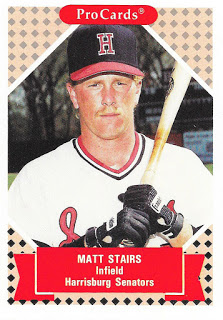 A couple other guys who would have lengthy big league careers. I plan on sending the Stairs card off to San Diego, as he’s got a pretty good TTM rate. 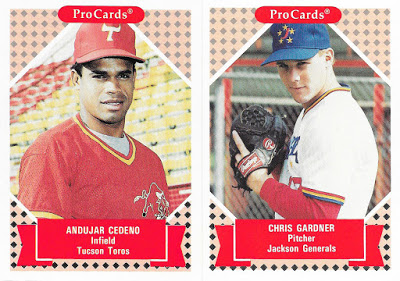 Of course, having bought a dozen or so packs (probably more) of this stuff, I was bound to land some Astros that I needed. Cedeno and Gardner both made it up to the big league level.

This trio, however, did not. Although Fletcher Thompson is a hell of a baseball name. 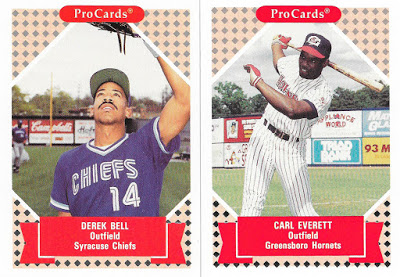 I landed a nice pair of guys who would make their way to Houston and roam around the outfield as well. Gotta love a nice minor league card of Operation Shutdown. Carl Everett could absolutely fly, and it was a lot of fun to see him play in center field. I’d love to get these signed. 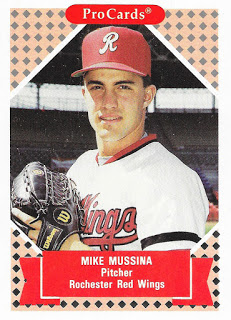 How about one more megastar to finish off this post? Now that my ‘Stros have been elected, and Tim Raines is finally in, my hopes for guys to make their way up the ballot results are squarely focused on Moose and Larry Walker. Both are easily deserving candidates. This was another really fun card to pull (I’m sure Nick V. would agree).
Oh, and by the by – this post has me caught up through May now! Looks like I may yet get caught up on 2017 before the end of March. Onward ho!
– Marc

0 Replies to “Tomorrow’s Heroes Of Yesteryear!”