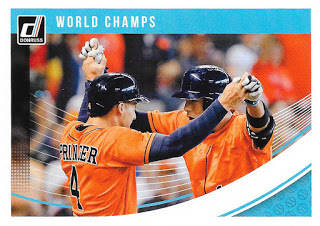 It’s a week into the season and I haven’t even posted yet. Let’s fix that. Last week y’all were all out here like, “oh, new product, check this out.” – just opening packs and blasters and whatnot all willy nilly, making a fella jealous.

As several of you know, being a new parent means a lot of trips to that fancy French store, Target. Or as they say it, “tar-zhay.” So I took advantage of my next visit to scope out the card aisle and grab a few things. Not too much, mind you, but just a few things. That included a pair of rack packs of 2018 Donruss. Yes, we can all bemoan the lack of logos, but overall I think Panini does a pretty good job with this one – well enough that I’ll pick up a few packs every year. It’s ring night in Houston – sorry Commishbob, but it looks like we’re laying it on your O’s pretty thick – so why not start with a card that says “World Champs?” I know these are multi-player cards and that they’re not all depicting guys on one team, but would it kill them to fill the white swoosh? 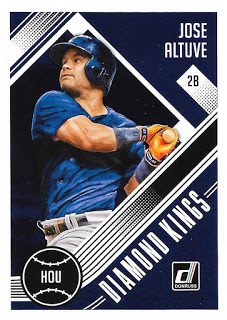 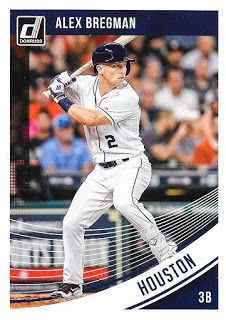 I pulled a couple more ‘Stros. The Diamond Kings are a pretty stark departure from the usual painted look, which threw me for a loop. There’s also apparently a variation of this Bregman that shows him with some pink accessories. 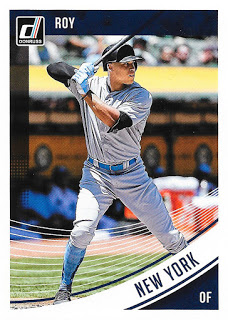 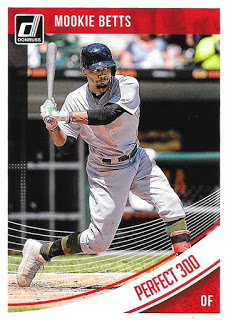 I enjoy that Donruss goes pretty hard with the variations and makes them abundant. It makes it feel like these cards are supposed to be fun. I’m not sure what “Perfect 300” is in reference to, but it’s a nice card of Betts – that one was already sent off in a trade. 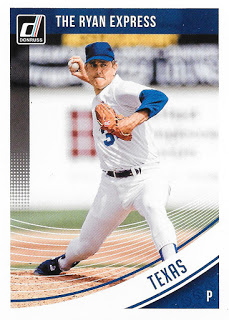 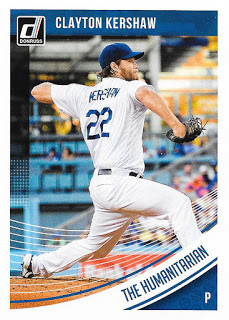 How about a pair of iconic hurlers from the Lone Star State? These two are variations as well. I was a little surprised to see that they differ in where the variation falls – Nolan’s name is swapped, while Kershaw’s team name is swapped out. I pulled the base Nolan as well, but I think I’ll only hang on to this one.

One last variation from Donruss – too cool to get a Trout listing him as the Millville Meteor, that’s a keeper for sure. 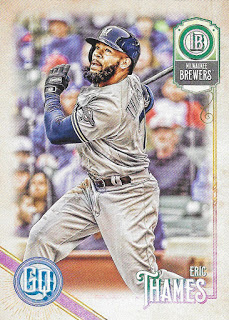 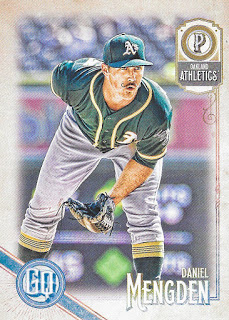 As I’m wont to do, I picked up a couple hanger packs of GQ as well. I’m fine with these, so long as they aren’t the dumb forced errors that Topps is churning out now. I’m still on the Thames train; it was pretty fantastic seeing him come over last season and rake at the beginning of the year – I hope he can still capture that. I wasn’t planning on PC-ing former Astros prospect and mustachioed Texas A&M graduate Daniel Mengden, but if he’s going to go full Rollie on us, I just may have to. 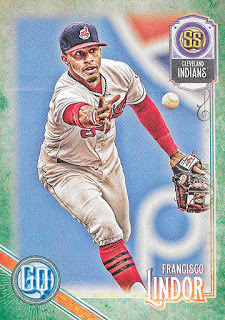 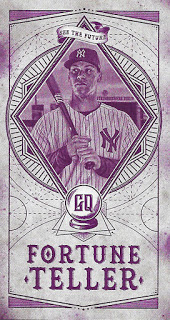 I pulled Lindor from the bonus green-bordered pack in addition to a base version. I like to mix things up a bit, so the base went off in a trade while I’ll keep this one. I only pulled one Fortune Teller in these, but it was the Judge, and I guess that’s pretty good news, right? I was going to try and trade this one, but I picked up more GQ after this, and I may try for the set now. 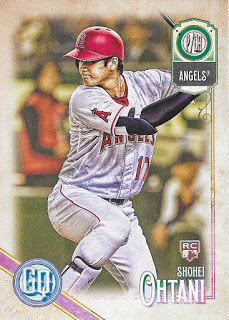 Pulled my first Ohtani. Yeahhhhhhhhhhhhhhh! Let’s take a look at that position designation, shall we? What’s that? P/DH? Now that’s weird.
No, seriously. Think about how weird that is. If he was in the NL, it wouldn’t even merit mentioning, right? But an AL pitcher, who will “play the field” at DH, listed in such a manner – it kind of baffles me. 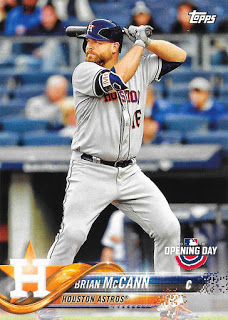 I snagged a few packs of Opening Day as well, because I’m a sucker. As much as I despise this product, I’ll pretty much always pick up a couple packs to check it out and hope I pull some ‘Stros. Well, ol’ Brian McCann was the only Astro in the bunch, and the inserts left me lacking once again. There wasn’t even a blue parallel to be found.
I thought I was done, but then something caught my eye on the blaster shelf – a box I hadn’t expected to see, one that you guys weren’t opening: 2018 Leaf Heroes of the Game Cut Signatures.
Well, hell – curiosity got the better of me and I bit. 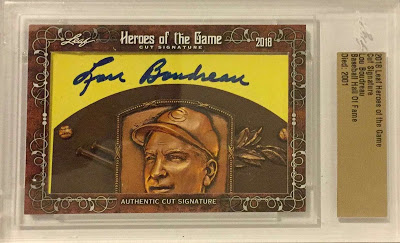 BAM! This was certainly better than I was expecting. The last time I tried a Leaf auto product, I wound up with a Bret Boone baseball (anybody want that?), so pulling a HOFer was a major surprise. Now, as an autograph collector, I pretty much loathe cut signatures, but at least this HOF plaque postcard was cut nicely and isn’t of the lower third or something like that. This counts as a bonafide score.
In fact, it was such an unexpected surprise that I decided to take a gamble on the two remaining boxes when I went back to Target the next day. The gift card burning a hole in my pocket didn’t hurt, either. 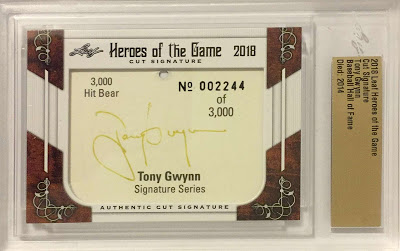 BOOM! This was certainly unexpected. I was a bit dumbstruck when this gold ink Tony Gwynn signature came out of the second box. After a little sleuthing, it turns out this is a tag from a beanie bear commemorating Tony’s 3,000th hit (hence the “3,000 Hit Bear” designation). 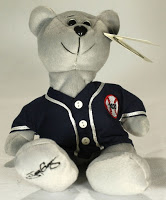 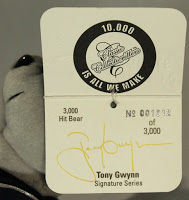 Here’s a pair of images I found on the web of the actual bear and the original full tag. I’ve got to say, that makes for a fine repurposing of the tag. It also cracks me up a bit to think that there are some 3000 Tony Gwynn autographed tags out there. I wonder how many are still attached to their bears?
So, just what was in the final box? 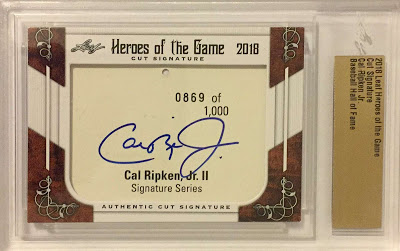 POW! A most unexpected pull – perhaps the most unexpected of all, in fact, as this is the main depicted on the box, just enticing you to buy the product. “You know you’ll never pull this,” it whispers, “but you just might.” Well, I damn sure did, and I couldn’t pick my jaw off the floor for a good hour. And that’s how I came into a Cal Ripken Jr. autograph. 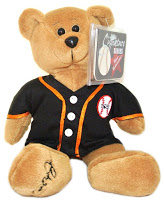 By the by, here’s a pic of the bear that these tags originally accompanied.

Are you happy now, fellow card bloggers? Look at what you made me do, buying all that new product!

0 Replies to “Look What You Made Me Do”