Last night’s post about cards from Johnny mentioned getting a December package from him as well. Well, I goofed – I actually got a package from him in late July and another one two months ago. So I’ll have to do yet another post about the wonderful cards he’s sent my way. To be fair, though, he did label this one a Christmas in July package. See?!? It’s right there on the note. Let’s look at some of the awesome stuff he stuffed into this bubble mailer.

I’m going to lead right off with the heavy hitter of the package – a glorious and well-preserved specimen from what I believe is the 1966 Topps Rub-Offs set. It’s got the pennant design that harkens to 1965, but I don’t believe there were any baseball tattoos or rub-offs made that year, and it wouldn’t fit in the 1964 set due to the team name. This was wayyyyyyyy too cool. I think I did a little dance when I saw it for the first time. 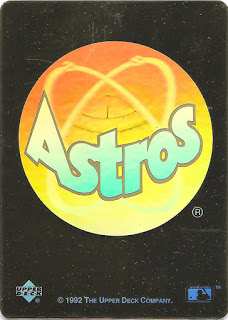 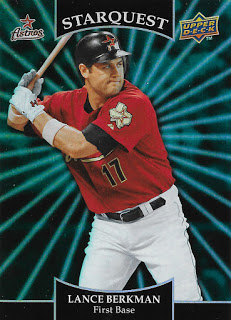 Now the Astros logo sticker from 1992 Upper Deck? It may not be quite as cool as the Rub-Off as far as wow-factor, but it was most certainly appreciated as well. I think I can finally put that set to bed. I believe the Lance is a “Super Rare Blue” Starquest from 2008/2009 UD, but I don’t recall off the top of my head.

Insert needs from 2017 A&G! I still need most of the minis – I think I have this Springer (which might be an A&G back) and a Keuchel A&G back, and that’s it.

There was also some great stuff from 2017 Archives, including the “coin” of Yuli and another great Keuchel card. I actually pulled the Bregman coin last year, so I think that makes the entire team set. 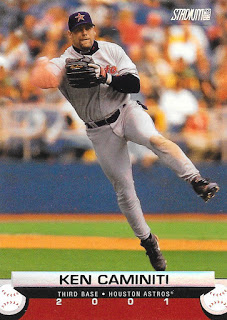 Ken Caminiti at both ends of his tenure with the Astros – including both stints! I love a good young Cami card. 2001 Stadium Club is underrated, by the way. 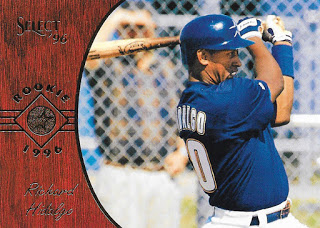 I had no idea Richard Hidalgo was getting cardboard love as early as 1996, but Score was on top of the game and put him in the Select set that year. 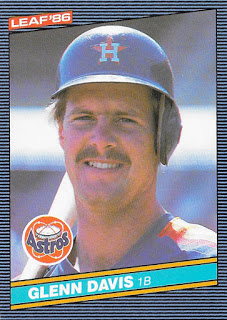 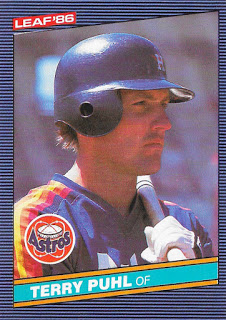 Oh, Canadian greatness! Love it when I can check off some of the cards from our neighbors to the north. 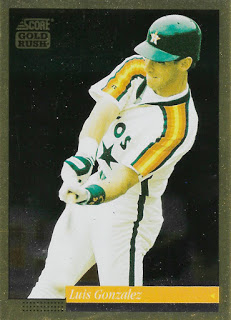 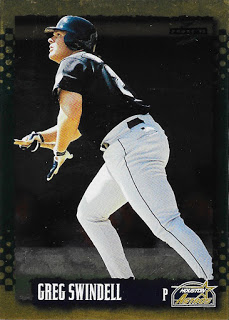 There were some Gold Rush parallels, including these of Luis Gonzalez and Greg Swindell from 1994 and 1995 – very nice. 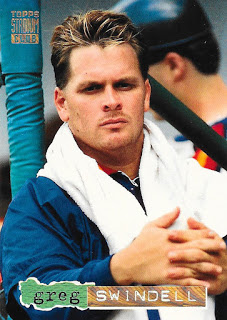 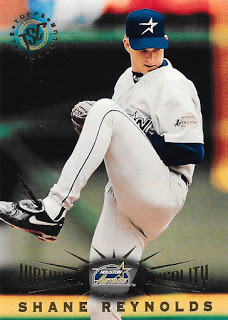 Stadium Club crept into the mid-90’s parallel action as well, with a 1994 Golden Rainbow of Greg Swindell, fresh out of the steam room, and Shane Reynolds getting down with some Virtual Reality.

It’s time for horizontal goodness, and it’s also Lima Time time! 2000 Upper Deck is one of the worse permutations of the brand’s flagship offerings, but I really enjoy the foil stamp they were putting on cards in that era to signify All-Star selections in the previous year. Lima and Mike Hampton both put up 20-win seasons for Houston in 1999. 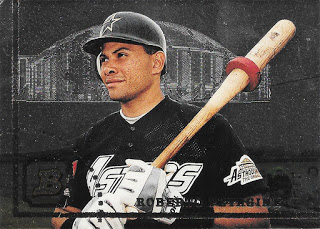 And now, for a tour of the land of failed prospects. Their careers might not have been so sparkly, but their cards are sure something to look at! First up is a really dope foil card of Roberto Petagine from the 1994 Bowman set, including an awesome stamp of the Astrodome in the background.

Mitch Einertson showed up in a fun throwback from 2004 Bowman Heritage. I believe the black and whites were a parallel issue, too. 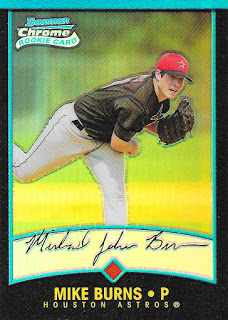 Some shiny Bowman stuff of a pair of pitching prospects. Burns actually made it up to the big league club for a brief moment, while Appel just retired this offseason in order to focus on other goals. I hope the best for him. These fiery/melty die-cuts from 2014 Bowman are just nuts. 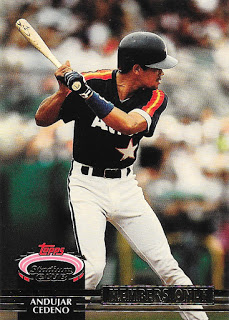 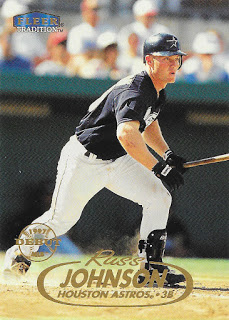 A pair of left-side infielders who were traded away. Cedeño was part of the massive 12 player trade with the Padres in 1995, and Johnson was moved to the Devil Rays in 2000 for a brief Houston appearance by Marc Valdes. The Cedeño is from the 1992 Members Only set and highlights his cycle in 1992. Two things I learned from the back of the card – Cedeño was actually recalled that day, and it was the first home game after the Astros spent an infamous month on the road thanks to the RNC taking over the ‘Dome in 1992. 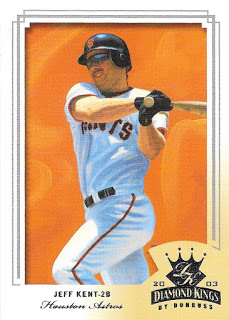 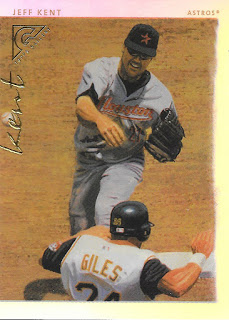 Even Jeff Kent and his ever-present windshield sunglasses made an appearance! The Topps Gallery on the right is another fancy parallel card. 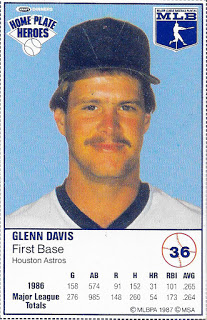 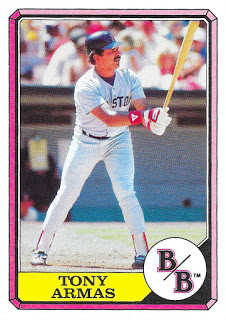 Food issue fun! Johnny knocked out another of my Kraft Home Plate Heroes needs, and the Armas comes from an oddball set that I may slyly be working on. How’d he know? Some of those bloggers out there just have that sixth sense I suppose. 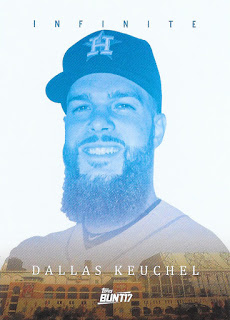 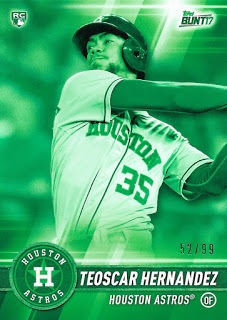 Bunt inserts! I thought the Infinite inserts were really nice. I hate to see Bunt get all parallel-crazy, but I sure don’t hate seeing a nice Teoscar Hernandez #52/99 showing up in the mailbox! That was definitely cool. 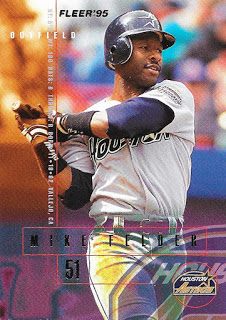 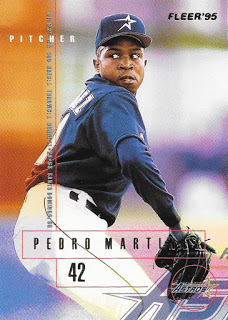 Who says that 1995 Fleer has nothing to offer? Here’s a pair of fine examples from the Update series of guys who only have a few Astros cards out there. Did you know that (the other) Pedro Martinez once pitched for the Astros? 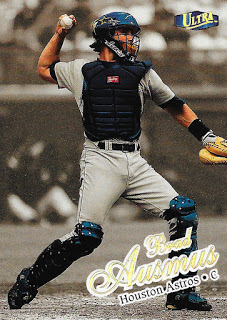 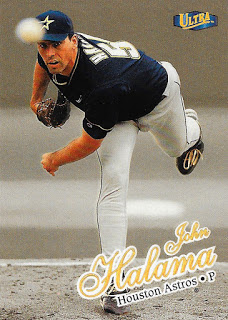 Now these – muah! *kisses fingers* – absolutely lovely Gold Medallion parallels from 1998 Ultra. This is one of the nicest sets from the ’90s, and the gold parallels are simply fantastico. 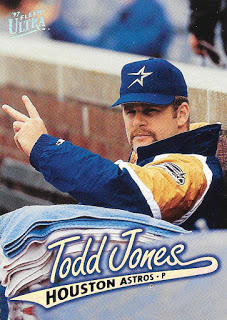 “Hey check it out! Todd Jones is just lounging around over there!”
“Yup. What’re you gonna do about it, rook?” 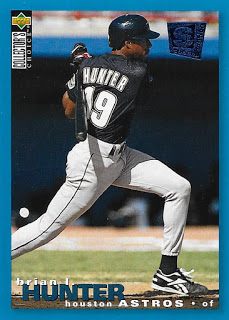 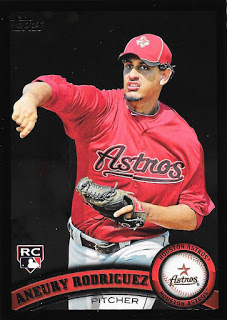 Now these two rookies are both special in their own way. The Brian Hunter is of course from 1995 Collector’s Choice SE (special edition), while Johnny surprised me with a super special Aneury Rodriguez blacked-out parallel from 2011 Topps. Yes! 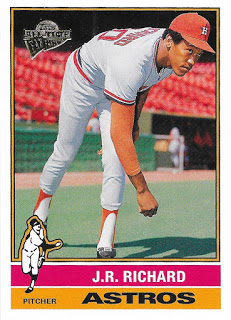 Finally, I’ll close out with a pair of old-timers found in more recent issues. The J.R. Richard is a super-cool card, providing an alternate take on his 1976 offering utilizing a photo from the Topps Vault. Johnny was also kind enough to send along an amazing Merrit Ranew 1962 buyback from 2011 Heritage.

Thanks again Johnny! Y’all will have to check back in a day or so to see some more awesome cards he sent my way in February.

0 Replies to “Simply Having a Wonderful Christmastime”