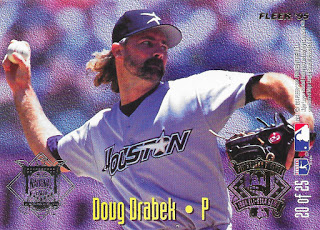 My last post showed off a seven month old package from our pal Gavin at Baseball Card Breakdown. I’m happy to report that this package only dates back three months. That doesn’t make my tardiness any better, but this post will mean that I’ve caught up on posts with yet another blogger. I’d sent him another stack of cards in February, and by mid-March he’d fired back with a matching pile which included all of these great cards.

First up was this rad Doug Drabek All-Star insert from 1995 Fleer. This is definitely one of the best things about ’95 Fleer, except for the fact that my NL guys got stuck on the back of the cards, so all that extraneous text gets in the way of the photo. Mike Mussina is on the reverse here. 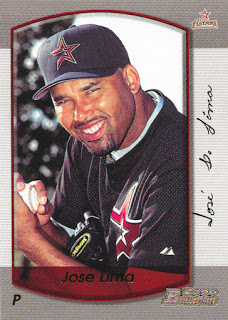 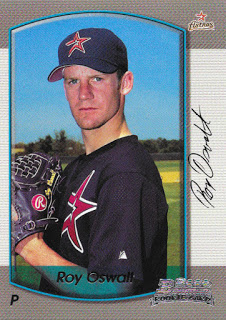 It’s Lima Time Time! Look at that gloriously happy man. We miss you José. Gavin also sent over an Oswalt rookie! What a pair. 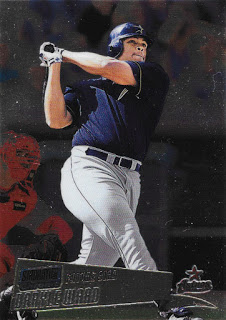 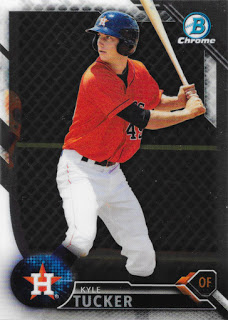 There was lots of good shiny stuff in this box, including some young sluggers. The Daryle Ward is from 2000 Stadium Club Chrome, and looks super sweet in hand. Kyle is now ripping it up in AAA Fresno. He picked up the nickname “Ted” in Spring Training thanks to the resemblance his swing bears to The Splendid Splinter’s. 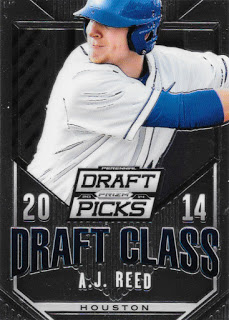 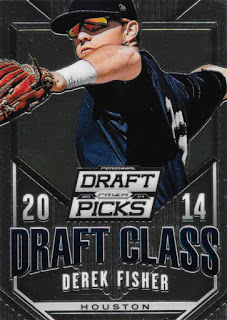 Both of these guys have made some contributions at the big league level now – including some key pinch running by Fisher in the World Series. However they’re currently both mired in AAA as Fisher got off to a slow start this season and Reed was struggling last year. 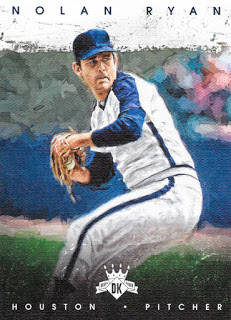 Of course, anyone who’s read Gavin’s blog knows his love for the Topps Retired Signature series. This awesome José Cruz card comes from the 2003 set. The design mimics 2003 Topps, which I think is one of the better modern sets they have released. While we’re on the subject of club legends, Gavin found me a Nolan Ryan from 2016 Diamond Kings as well. 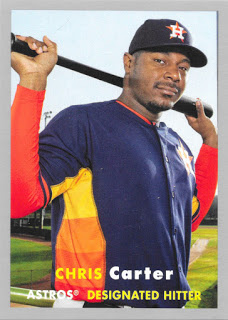 Ah, Mr. Carter. It’s still kind of crazy to me that he could lead the league in homers and not come away with a contract the next season. This silver parallel from 2015 Archives is #34/199. 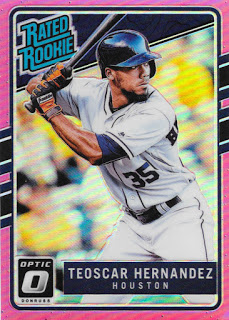 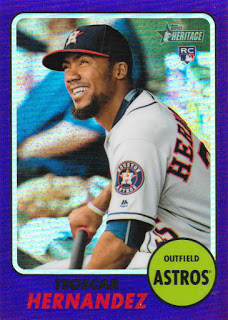 Teoscarrrrrrr! I miss you Teoscar. He was fun to watch, but got crowded out of the outfield here. He’s had himself a pretty productive season in Toronto though, and has been a nice pickup for my fantasy team. These shiny parallels were a real nice surprise. 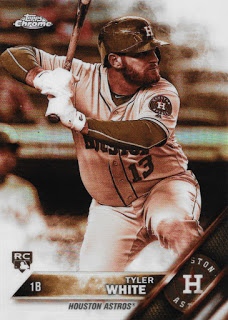 Tyler just got called back up to the big club for the first time this season, after Reymin Guduan went on paternity leave. It’ll be interesting to see if the Astros stick with a 7-man bullpen for a bit or if White will be shuttled back to AAA. I’m not a huge fan of those sepia parallels, but at least I can take solace in the fact that it looks nicer in hand. The pink Optic, however, is fabulous. 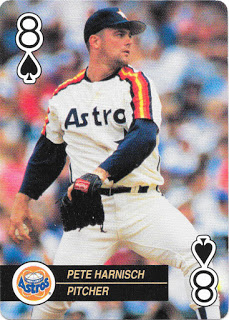 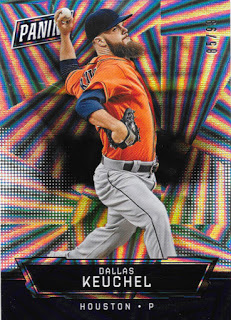 Gavin also plugged a hole in my collection with this Pete Harnisch from the 1992 U.S. Playing Card set. Pete was one of my favorites as a kid, and you know I love me a good oddball. Meanwhile, this crazy looking thing from Panini (and it looks even more spectacular in hand) is from the 2017 National set, and is stamped #85/99. I mean, where does Gavin even find this stuff? That card is just crazy. 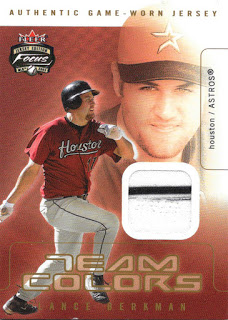 Finally, we’ll close the post out with arguably the coolest surprise in the bunch – a pinstriped Lance Berkman relic from 2003(?) Fleer Focus Jersey Edition. I certainly wasn’t expecting this! I really need to take a little time and get all my relics and certified autos organized and stored properly. For as much as I have in order, they’re split up amongst a couple small boxes and a binder. Perhaps that’ll be one of my next projects.
Thanks again for a stellar trade Gavin!

0 Replies to “Another Great Package From Gavin”