by MarcPosted onJune 20, 2018July 8, 2019
Well, I’ve turned this blog into trade recap central, which is a little bit of a shame. I mean, it’s great that I’ve spent a bunch of my posting time trying to get caught up, but there are a lot of other things I wanted to touch on which I just haven’t gotten around to posting. Plus, I know you don’t want to just read a blog that’s full of entries saying, “so and so sent me this, I think it’s awesome.”
Yes, trades are great, but I’m sure that gets plenty boring for everyone after a while. Because there are so many more things to write about – from longer posts reflecting on how my collecting has morphed over the years (I’m still plotting out a big post on how I’ve organized my cards at various points) to blog bat-arounds to properly highlighting some of the custom cards I’ve made. Oh, and let’s not forget that I still intend to complete a #DocumentaryNOW (or whatever we’re calling it) set for the ‘Stros this year.
So let’s have a little fun. This post isn’t trade related. Hell, it’s not even Astros-related. This one goes back to a thread on Twitter in February of this year, when we were still all dreaming sweet dreams of fresh cut grass. I don’t believe Spring Training had even started yet. But that didn’t stop Nick (@vossbrink) from inspiring a quick round of Brucards customs when he answered, “please someone make a purple version of 1990 Donruss using a Purple Rain type font for the names.”
Well, now I had a mission, and it didn’t hurt that I had a near-complete 1990 Donruss template to boot. 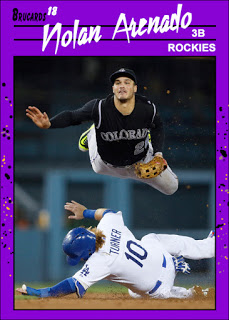 After a bit of searching for a font (this one is called “Purple Reign” I believe, and is a close approximation of what graces the Prince album’s cover), a little hunting for photos, and a quick session in Photoshop, I give you: Purple Reign cards! While Jon Gray, Charlie Blackmon, and CarGo are good players, Nolan Arenado was the obvious choice to feature from the current roster. That leaping play over Justin Turner is simply phenomenal, and I really dig the posed shot. 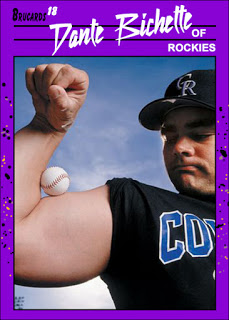 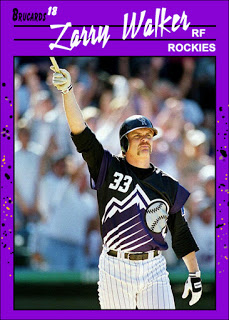 Not one to stop there, I figured I’d make some more cards with some of the Rockies legends. So, I headed over to Baseball-Reference to check out the franchise WAR leaders and was quite surprised. I ended up going with two of the most obvious Rockies from my youth: Dante Bichette and Larry Walker. The Bichette image is from a fantastic 1998 SI shoot and should really be seen in all of its full horizontal glory, but I wasn’t about to go through the effort to translate 1990 Donruss into a horizontal format (plus, I don’t think the aspect ratio would work). The Larry Walker image is, of course, from the legendary “Turn Ahead the Clock” games in 1999 – something that my Astros unfortunately skipped out on at the time.

I’m sure I bagged on these at the time – with very few exceptions they are by and large bad uniforms, but I really wish the Astros had done it so I could look back upon it in wonder and/or disgust. As it is, the Rockies uniforms are one of the better sets out there from Turn Ahead the Clock night.

Anyhow, these were a lot of fun to make. Thanks for the inspiration Nick (and Phungo, and PK Steinberg, by proxy). Plus, now I have a nice ’90 Donruss template with some easily interchangeable border colors!