by MarcPosted onJune 9, 2018July 9, 2019
Hi again everyone! I know the posting has been sparse lately, but don’t worry, I won’t go completely dark in June. I’ve got a lot to catch up on, as always, and I’m hoping that I can have another big month of catching up – you know, now that we’re over a week in already. Anyway, here’s the TTM Report from May – just a few here as my letter writing has tapered off as well. 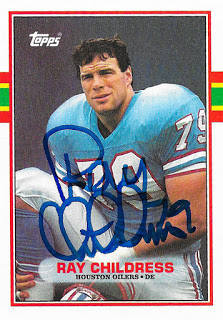 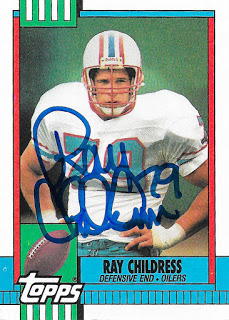 Wait, feetball? Yup, I wrote another former Oiler and fellow Aggie, Ray Childress. As an Aggie, Ray was part of the storied Wrecking Crew defense, racking up 15 sacks and 117 tackles in his junior year and 10/124 in his senior year, remarkable numbers made even more so by the fact that he was not a linebacker. He was named an All-American in both seasons, and inducted into the College Football HOF in 2010. Ray spent twelve seasons in the NFL, the first 11 with Houston before finishing off with a final season in Dallas (blech). He tallied 76 1/2 sacks, 887 tackles, 19 forced fumbles, 5 Pro Bowl selections, and shares the record for most fumbles recovered in one game (3) with 14 other players (including Rod Woodson, another childhood favorite of mine). I’d written Ray a few years back to a fairly quick turnaround, so I had chalked these up as gone. After nearly a year and three months, this was a pleasant surprise.

So, this was about adding another ROY to the collection – but also about the cards. I’d recalled seeing reports of Chambliss returns on SCN, and when I was thumbing through my stack of ’79s, I just loved the card. So I grabbed that, and the ’81 Fleer from my set, and stumbled across that ’80 Topps with the ultra-weird post-swing shot, and sent them off. A rousing success, if I may say so. 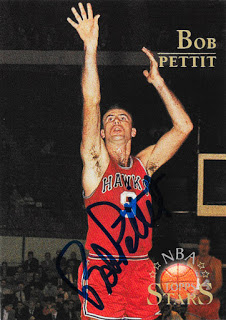 Wait, roundball too? This is a weird TTM report, right? For some birthday back when basketball was still on my radar, my parents gave me a complete set of the 1996-1997 Topps Stars set, which featured 3 cards each of the recently named 50 Greatest Players list.

Pettit garnered a selection, having played 11 seasons from 1954-1965, finishing his career with 20,880 points, 12, 849 rebounds, and 2,369 assists. He won the ROY in 1955, the league’s first MVP award in 1956 (and again in 1959), and picked up a championship in 1958 with the then St. Louis Hawks. He was also named the All-Star Game MVP four times, back when that probably meant something. And that’s just a brief summary of his NBA career. He was inducted into the Hall of Fame in 1970, and still ranks an astounding 37th on the all-time scoring list – just above The Admiral – David Robinson, and was just recently passed by Kevin Durant.

With a resume like that, how could I not send a card to him? He seems to be a strict 1 per, so perhaps I’ll scribe another pair of letters in the future to see if I can’t knock out all three cards from this set. Pettit marks the fourth member of the original top 50 list whose autograph I own, and third from this set. The others are Paul Arizin, Bob Cousy, and Lenny Wilkens (not from the set).

So a short and sweet month, but three nice returns. And as promised, there will be plenty more posts to come this month, don’t worry.