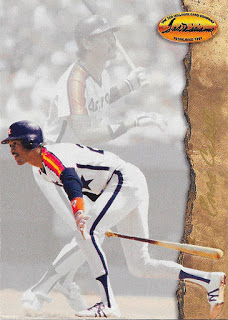 I’ve been attempting to do some cardboard liquidation this year, and in the process I’ve sent out a smattering of packages large and small in my quest to get some of this extraneous cardboard out of the house. Fortunately, our pal Jason hoards cardboard, so one of my larger packages a few months back was sent his direction.

Jason has proved to be a fine addition to our cardboard community, bursting onto the scene last year, and of course he’s consistently one to send a nice package in return – even though I certainly didn’t ask for anything. He put together a small but stellar package of ‘Stros that checked off several holes in my wantlist.

Inside the little priority mail envelope that showed up this week was this really fun Enos Cabell from the much-loved 1994 Ted Williams set. I’ve half a mind to chase this set down someday, but it’ll have to be far down the line when I can have my own space for cardboard. For now I’ll just take the Astros and PC guys. 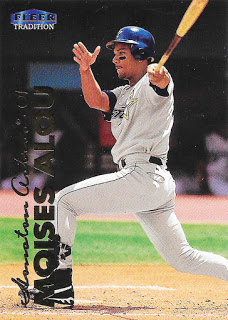 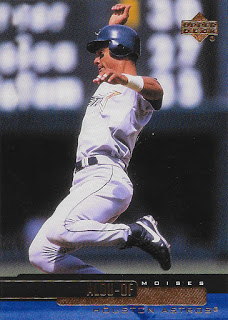 Jason found me a lovely pair of Moises Alou cards that I needed. Alou was a player I loved watching during his time in Houston – he put up monster numbers in ’98 and ’00-’01, and it’s tempting to think about what might have been in 1999 had he been healthy and on the roster. He was always great to the fans when he was here as well; I have several autographs of his from hanging out by the dugout as a kid. 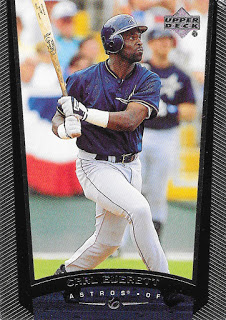 Jason chipped away at my 1999 Upper Deck needs as well, with two more of my favorites from the roster: pint-sized dynamo Mike Hampton and speedster Carl Everett. 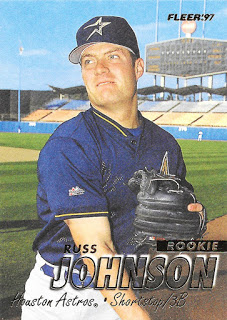 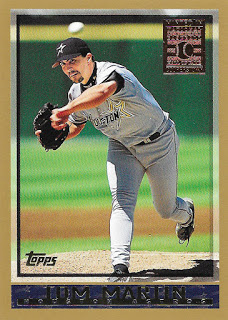 Ooooooh, 1997 Fleer! Now that’s some rarer stuff. I loved ’96 and ’97 Fleer – classic, non-gloss, simple designs, and it seems that not a whole lot of it hit the market. An exponential improvement over ’95 Fleer, I’m sure we can all agree on that. Jason also managed to find me another 1998 Topps “Minted in Cooperstown” for my collection. This Tom Martin joins the Luis Gonzalez card in my binder, and now I’ve got two of them. 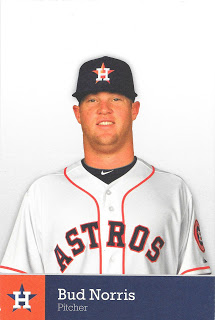 Jason’s envelope wasn’t all cards though!  The next surprise waiting inside was this Bud Norris postcard, which looks to be from 2013 based on the uniform. I’ve no idea how Jason came into this, but I love getting oddball stuff such as this postcard.

Also, let’s take a moment to note Bud’s incredible #DADHAT. That thing is sitting so high on his head it’s simply marvelous. It almost looks like an old school hardhat, as if Bud’s carrying a lunchpail on his way to the clubhouse. It’s just shy of London police helmet height, but it’s close. The chin just blends right into the neck, too – a true thumb of a man. 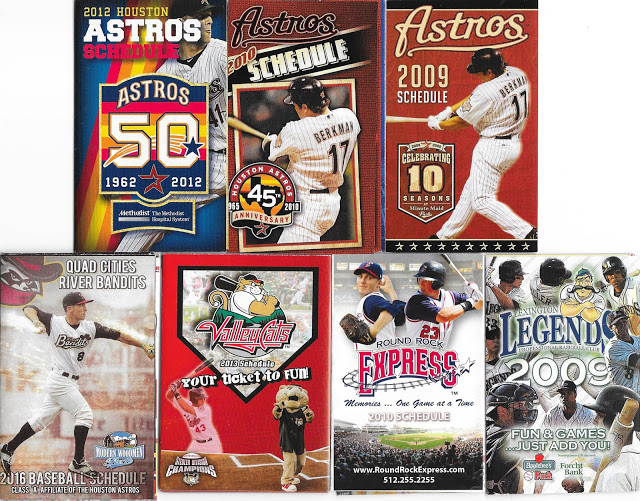 The really neat surprise in Jason’s package, though, was this collection of pocket schedules that he found for me. Somewhere, he managed to track down 2009, 2010, and 2012 Astros schedules, as well as a 2009 Lexington Legends (A, South Atlantic League), 2010 Round Rock Express (AAA, Pacific Coast League), a 2013 Tri City ValleyCats (Short-Season A, NY-Penn League), and a 2016 Quad Cities River Bandits schedule (A, Midwest League). As far as I can tell, the players depicted here are Lance Berkman (’09 and ’10 Astros schedules), Jordan Lyles (’12 Astros), and Alex Bregman (2016 Quad Cities). The ValleyCats player seems to be a pitcher batting, based on the uni numbers at The Baseball Cube for 2012 and 2013. I can’t place the pitcher on the Round Rock schedule – if I dug through my binder I could probably find the face – but the batter is definitely Brian Bogusevic. The Legends schedule really has me stumped – I can’t place any of these guys except for Kyle Miller at the top. Jersey numbers are hard to come by for this team. If I had to guess, I’d wager that catcher in the bottom right is probably former 1st round pick Max Sapp, and I’d guess the top right is maybe Brian Pellegrini or Brandon Barnes, both rated prospects.
Thanks so much for the package Jason! I really appreciate it, this was a fun one.

0 Replies to “Sweet Cardboard from Jason!”