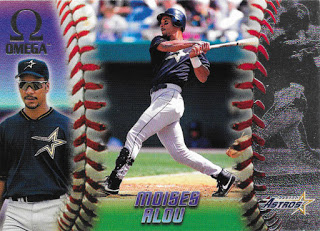 This has been popping through my head a lot recently, for several reasons. But a semi-recent epic Twitter thread featuring discussion with Nick Vossbrink (always good for a long thread), Tony, and some others led me to thinking about how I’ve organized my cards over time. 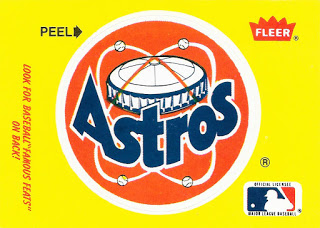 My first cards were gotten in the late 1980s, and stored in a pair of shoe boxes. My mom covered the box lids in paper, and I in turn covered the boxes with baseball stickers – mostly gotten from Fleer and eventually Upper Deck packs. I vividly remember one being a green Stride Rite box, with its white paper lid and sides all covered. The cards were separated by team, and bundled with rubber bands of course – some doubled or tripled to hold the cards real tight. I was 5-6 and condition was not a concern, after all. A few of my well-worn ’83 Topps still show the scars. 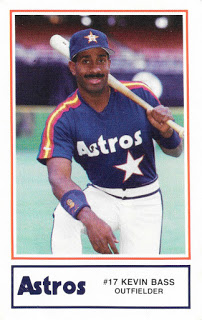 Eventually one box had grown into two boxes, and then I needed more storage. Such is collecting, after all. Around this time, my parents gave me a complete set of 1991 Topps for Christmas. I think at my birthday that year, I had gotten a “starter set” of baseball cards, a few pages, and a branded binder. Or perhaps it was ordered through one of those Scholastic book order catalogs at school. It may have even been the case that it was ordered that way, as a birthday present. Who knows at this point, that was 27 years ago.

I do know that “starter kit” was from Impel, and included their 50-card 1991 Line Drive set. The binder was branded with a Line Drive logo, and there were pages for the cards. I believe this is the first card binder that entered my life. 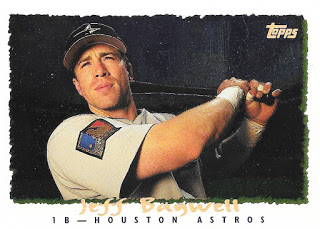 But what was I to do with the growing number of commons that I was acquiring? The team stacks couldn’t be contained in the shoe boxes anymore. They’d grown to the point where the rubber bands were bursting when I tried to bundle them. 800-count long boxes eventually found their way into my collection, and became a preferred method of storage.

Sometime around 1994, my Bagwell collection was born. I mean, it was in progress before that, but as his cards started becoming more plentiful and checklists became easier to find online, I told my dad I wanted to start what we would now call a super collection. So Jeff got his own binder. 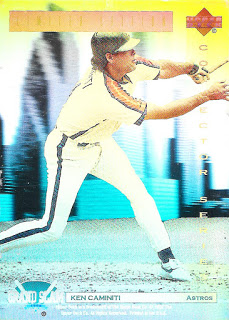 Other binders became essential after that. Star players were worthy, after all, of special treatment. Fortunately for me, the local baseball card shop was a quick bike ride from my house. I was completely spoiled in this way, but it meant that cards – and the necessary supplies to store them – were readily available. An array of binders began to collect on my window seat. There was still not much organization to them other than each player got his own page, and when that collection eventually outgrew 18 cards, they graduated to another page. Players were bindered in alphabetical order. Guys like Will Clark, Mark McGwire, Barry Bonds, Bobby Bonilla, Andy Van Slyke, Orel Hershiser, Cal Ripken, and so on.

The next big reorganization that happened was spurred by another shift in my collecting habits. As we went to more games, and I rediscovered TTM requests – including getting a Smalling book, autographs became a larger part of my collection. So I looked back at all my cards, and thought to myself, “I should organize these alphabetically by last name to make it faster and easier to pull them for autograph hunting.” I can still recall this task, as it was a huge shift in my organization of cards. 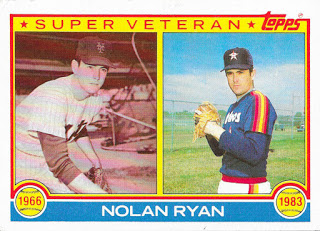 Since we were in Houston, and Astros were my primary goal, I had one 500-ish count box filled with cards of the current Astros roster, which I would sometimes drag to games. On other occasions, I would pull cards from it to put in a spiral notebook instead, which I would then take. I kept this faithfully updated, and watched the Transactions portion of the sports roundup in the paper dutifully. 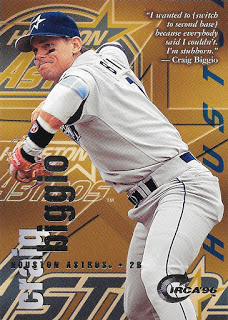 Some time around 1998, as my dad and I were planning our big baseball trip for the following year (blog entry to come someday) I picked up an old cigar box, and started filling it with cards of Hall of Famers. It was large enough to fit the postcards and photos I picked up as well, so it was perfect – for a time. It was fun too, but not really great for organization.

And then my cards sat there, neglected. Eventually, they were all moved into the closet or the window seat for storage. I was about to head off to college, and music had become my preferred way of blowing my hard-earned money. Life moved on, but my cards didn’t.

However, when we decided to move out of our rental and start saving for a house, we moved in with my folks for six months. We paid our share of the utilities, and let them use our HBO subscription, but otherwise we got to save a nice bit of money. While we were there, though, I rediscovered my cards. I found this blogging community. I came across TCDB and catalogued everything in my collection there while watching the Astros lose 100 games a year or during episodes of Master Chef Junior, or whatever. 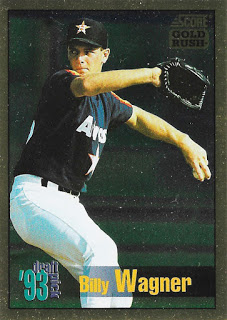 While entering all those cards, I figured I would start working on a full-fledged Astros collection. I gathered my Astros cards (apart from Jeff, who kept his own binder). I began to build wantlists. I pulled out the cards of some of the vintage guys I collect, and put them in another binder. The rest of the binders got emptied out, cards were put into boxes. I bought new cards for the first time in a decade. I started building some “old” sets from my childhood, and then that lost steam. Thanks to everyone who helped me build the 1989 set, by the way – it felt great to achieve that goal of finally hand-collating a set through trading.

Now my priority is trading. So I’m reorganizing again. Sure, there are still plenty of areas where I am still collecting: there are a few vintage sets I’m building, and I’ve got a 5000 count box with HOFer and star cards to keep (it’s only about half full so far) There’s also a large box of cards for TTM hunting. And of course, there are binders for the Astros, the Bagwells, and the other PCs. 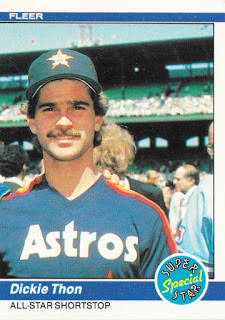 The hardest part of trading, though, is locating the cards for fellow traders. While an alphabetical organization was fine for pulling cards to take to the park for autographs, it’s not ideal when you’re trying to get as many unwanted cards out the door as possible. So I’ve spent portions of the last 6 months slowly re-organizing all my cards available for trade by year and then set. And I’m finally almost done with that – so let’s get some trading done!

I’ll close this in the Fuji way – how do you organize your cards, everyone? Leave a comment, or write a post. Either is fine by me.

*Note: all cards in this post came from the several boxes that were given to me by Trevor last year. Peppering them in here seemed better than just subjecting you all to a long and boring post about cards I got a year and a half ago. But, I will highlight some of the other cool ones in a couple upcoming posts.

0 Replies to “On Organizing”