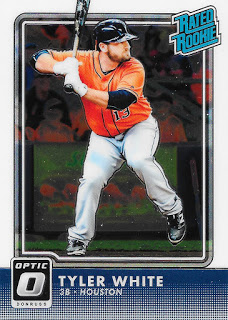 I’m late on this post, of course, but last month everyone’s pal Colbey from Cardboard Collections hosted what he dubbed a “Free Twitter Break” of a pair of 2016 Donruss Optic boxes he’d acquired. Free meaning, all you had to do was chime in first for your team’s slot and drop a paltry four bucks for shipping.

Well that fits my budget perfectly! So I paid our pal over the internet, and a week or so later my cards showed up. I hadn’t been able to watch the break live due to a busy schedule. I can’t recall if it was general family busyness, of if it happened on a night I was working. I think it was the latter. Anyhow, it made opening this little package all the better because it was a total surprise.

It was a hit right off the bat (sorry/not sorry) with this Rated Rookies pull of Tyler White. I’m not sure if it worked the same in Optic, but for the base set the Rated Rookies were seeded more rarely than the other base cards. Seeing as I only got one, it was probably the case for Optic as well. 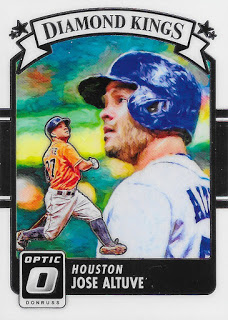 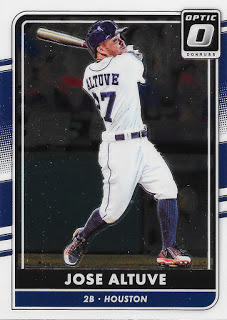 The Diamond Kings were the other rare base seeds, and I needed both of these Altuves. Score! 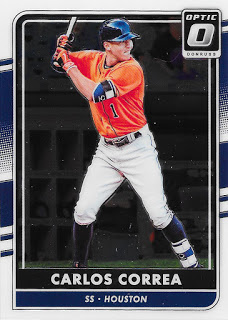 Carlos Correa was the final name I hadn’t checked off from the set yet, so pulling his card was a nice bonus. At first glance, I thought all three cards I got of him were the same, which would have left me one short-print shy of the team set. “What a bummer,” I thought. But as I was entering the cards, I triple-checked my stack and sure enough, the SP “ROY” variation was in there! I find it interesting that the crop on the photo is just slightly looser here as well. Call me crazy, but I prefer seeing his feet over the other option where he’s chopped at the ankles.

Ok, so this Correa was obviously different, but you know what I meant. I was happily needing all three Purple Holo-Prizms that came my way. 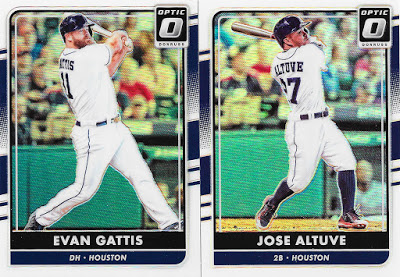 Finally, there were some regular Holo-Prizms in there as well: big bearded Evan Gattis and our pint-sized puncher Jose Altuve. I really wish Jose would go with “Gigante” on his Player’s Weekend jersey, as it’s the nickname his fellow Venezuelans use for him (and it’s perfect). While the both the base and parallel set look nice and shiny in hand, these clearly have the superior scan value, and that’s something I can definitely appreciate.
Thanks for generously hosting this break Colbey! You knocked out all my base set needs for 2016 Optic, which means I can queue up an All Them Astros post! Well, you know – after I get caught up on all these trades.