by MarcPosted onNovember 4, 2018July 8, 2019
Alright, I won’t make you wait until the end of the month once more to see what fresh ink showed up in my mailbox during the past month. Here’s your October TTM Report. Once again, I haven’t been writing a ton, so it’s a little light, but I’m pretty happy with what I got. 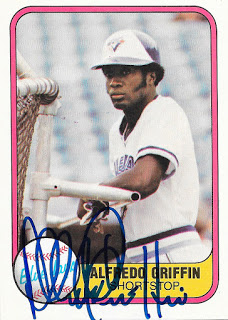 My first return was from Alfredo Griffin, whose big league career started in 1976 with Cleveland. Between ’76-78 he got into 29 games before being traded to Toronto in the offseason. That gave him a real shot at playing time, where he finally put in a full season of games and split the AL ROY award with Minnesota’s John Castino. Their slash lines were very similiar:

After seeing some responses from Griffin on SCN, I decided to take a shot at him, writing him care of Angels Spring Training back in January – of 2017. It took a while, and he held onto an 84 Donruss that I sent along, but 3/4 cards is still really nice. These ’86 Donruss don’t look to bad with some ink, and I was particularly excited to add another signed ’81 Fleer to my growing stack of them. 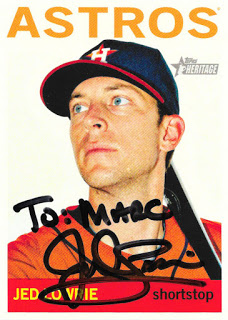 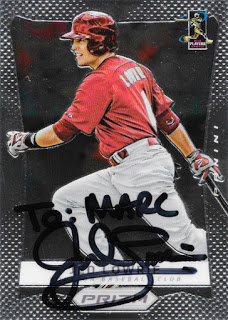 The next return to arrive was sent out to Spring Training as well. This one was sent out to Jed at A’s Spring Training in late March. He’s signed for me once before, but kept both of the Astros cards I’d sent and instead signed the ’09 UD (Red Sox) and ’14 Topps (A’s) which I’d included, so I decided to take another shot. He personalized my cards this time, which is totally fine by me.*

I’m really fond of that 2013 Heritage card, so it’s the one that made it to the Astro-graphs binder, unseating the previous ’09 UD return. Unfortunately, I didn’t get any response to my letter, in which I asked him about his hobby – photography. Jed dabbles in it, and if you’re curious you can check his website. As Nick V. said when I pointed this out to him, “he needs to get some tips from Randy Johnson. :p”

* I’m totally cool with this as long as they get my name right, which he did. I’ve gotten a few “To: Mark” inscriptions before, which is always a little awkward. 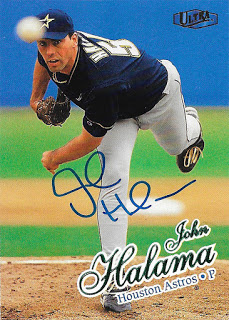 John Halama: 2/2, 288 days.
My last return of the month was another one I sent out in January (of this year), after spotting a  fairly rare return from John Halama. I was very happy to get this one back. John’s time with Houston was brief, but he was fun to watch while he was here. The lefty prospect was shipped off on October 1, 1998 as the PTNB portion of the Randy Johnson trade in 1998. Randy was a very expensive rental, but somehow I still feel it was worth it in the end. If ownership hadn’t been so tight with the finances back then, they could have probably re-signed him that offseason.

Given that I haven’t been writing that many requests, it was nice to see three show back up in the mailbox in October. I was able to add a ROY auto to my collection, another signed ’81 Fleer, a new Astro-graph, and upgrade another from a non-Astro card – a pretty darn good month. Here’s hoping November will be even sweeter.