by MarcPosted onDecember 29, 2018July 8, 2019
It’s time to get these Brubaker’s Dozens posts wrapped up – there are only three entries left in this countdown, so we’re getting to some really good stuff here, at least as far as my opinion goes. 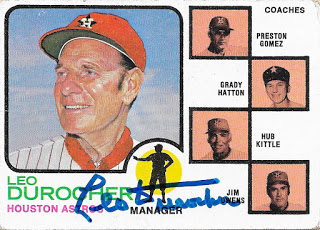 A lot of these have spun out of saved searches that I’ve sat on for ages, and sometimes it’s the stuff that I throw on my watchlist forever, knowing that some day, years down the road, I’ll finally pull the trigger on it. I’ve had a signed 1973 Leo Durocher sitting on that want list for a long time, with its $39.95 price tag. It’s The Lip’s only Astros card, and it’s one of those pesky high numbers (#624), and he’s a Hall of Famer, and sure it’s airbrushed to hell and back, but it is his only Astros card, so I figured I’d finally buy it someday.
But this isn’t that same card. No, somewhere along the line I got a wild hare to run a search for it again, and up popped a fresh listing for under ten bucks. So of course, I dropped a placeholder bid on it, and no one else bid, so voilà! 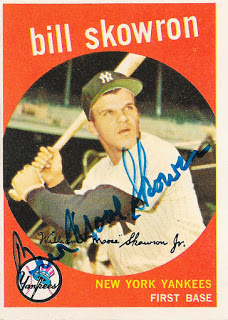 Then I went spelunking through the seller’s other listings to see just what else I might pick up for cheap – hooray for combined shipping! This ’68 Torborg was just a buck ninety-nine, and it’s a lovely signature. Torborg had a decent playing career – 10 years as a platoon catcher without much in the way of stats, but he caught three no-hitters – one by Bill Singer, the first of Nolan’s seven, and Sandy Koufax’s perfect game. Jeff also won the AL Manager of the Year award with the 1990 White Sox, when the team improved 25 games over the previous year. I don’t out-and-out chase award winners, but I do like picking them up on occasion.
Moose is one of those old-school guys that, despite being draped in Yankee-dom, I kinda really dig. He was an 8-time All-Star (earning double nominations in 1959 and 1960, hit .282 with 211 dingers and a 119 OPS+, good for 26.9 bWAR across a 14 year career. When I saw this lovely 1959 sitting there for under five bucks, it was an easy decision. I also really dig that he signed a full name with his nickname in there.
But it was the last two cards I found that were the real whoppers. 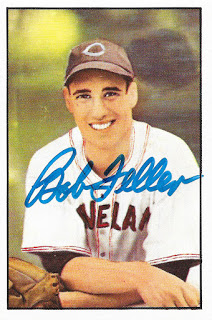 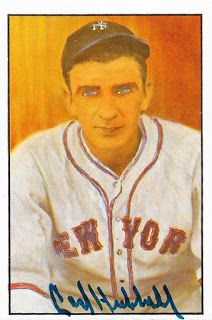 Ohhhh, yeah! Hot damn, that’s some cheddar right there! I was able to add this pair to the pile for less than another Andrew Jackson, and I am so excited about it. Feller was a known prolific signer, so finding him for less than ten bucks was surprising but not all that unexpected – but CARL HUBBELL! I mean, damn! These are definitely my two favorite non-Astros autograph pickups on the year. I’m so excited all over again just looking back at these to write this post. That’s two of the greatest pitchers of all time. Oh, and the cards come from the 1982-83 Diamond Classics set.

0 Replies to “Brubaker’s Dozen Finds of Ebay #3: Some Classic Ink”