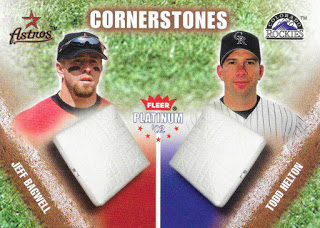 Much in the same way I came across the “lot” of Hunter Pence cards which makes up entry #12 in this series, this one started by chancing across a listing for a card and then checking out the seller’s other items. Hooray for combined shipping!

I picked these up back in July, and I think at the time I went to eBay on a whim to see if I could find some cheap Bagwell relics. I’m not sure what possessed me, although it’s entirely possible I was watching one of the weekend games where he was part of the TV broadcast crew (he did 1-2 games a month this past season and actually had some really nice insight to share) and thought to look up what all was out there. All of these cards came from one or two sellers, I can’t remember which, but were all from the same buying spree – so let’s just call it a lot. Nothing here cost more than a couple bucks, save for the last card, which I think jumped up just over four dollars.

But first, let’s talk about the goof. Again, after targeting a few cards, I threw in a bid on this Bagwell/Helton combo card mistakenly thinking it was a dual base relic. The scan wasn’t much to speak of, and I was on my phone, and I didn’t bother to look it up. So I wound up with a bunch of relics and then – this? Oh well, it’s another Bagwell in the books – er, binders. 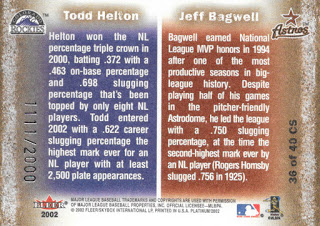 It is serially numbered, although at two thousand copies it’s not exactly scarce. If you can’t read the stamp, it’s #1111/2000 – a neat number at least. 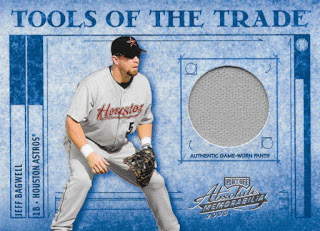 I think this is the card that started my search. In fact I think I set out on this search after doing some inventory and learning that I had only one of the two Bagwell relics in this checklist. At least, that’s what I recall, so that’s what I’m sticking with. I really like the bevy of Playoff sets that came out in the early aughts. Sure, there are a few clunkers, but by and large their graphic design team did some excellent work. Considering that this was the height of relic explosion, this is a very nice looking card.

Woo, game-worn pants! I’ve always found that distinction funny, although I suppose it’s probably cheaper to get pants than jerseys. This baby is numbered #173/250 – a nice pickup for just over a buck. 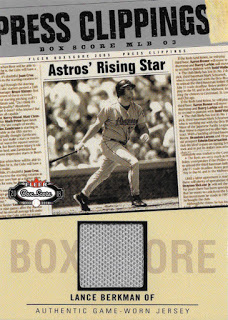 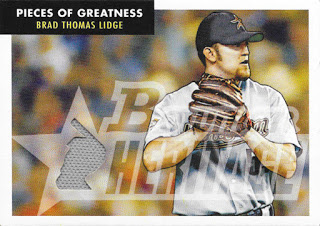 There were some non-Bagwell finds in the bunch as well. A “Press Clippings” relic of Lance Berkman from 2002 Fleer Box Score, and a “Pieces of Greatness” insert from 2005 Bowman Heritage featuring Brad Lidge. I like how the batter from the Heritage logo is used as the swatch window here, it helps offset the plain gray swatch factor. 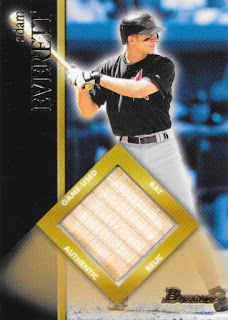 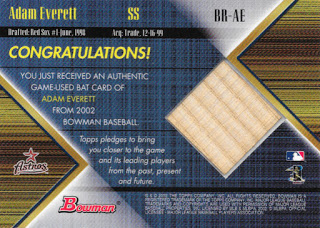 It wasn’t just jersey cards, either – this 2002 Bowman bat relic of Adam Everett was particularly striking. It’s a nicely sized relic, and the overall layout is pretty pleasing – although the golden haze by the relic window is a bit much. 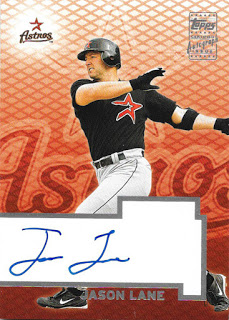 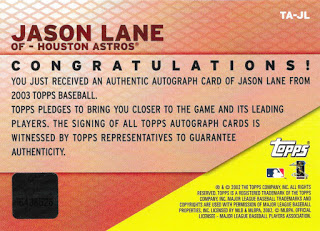 Somewhere in the mix, a Jason Lane certified autograph from 2003 Topps fell into my cart. As a team completist, picking this up for something like a buck twenty-five was a no brainer. Jason is great TTM, by the by. 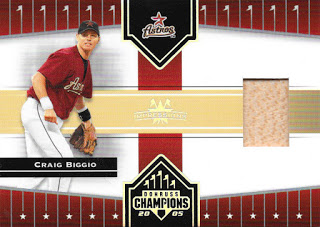 I saved a few highlights for the end of this post as well. This 2005 Donruss Champions bat relic of Craig Biggio is pretty nice, and showcases what the layout is intended for – as opposed to a bunch of empty space on the right half. Still, the actual relic could be a bit larger, and it would really improve the card. I like the flag and pinstripe layout that comprises the borders here. Not bad, and I got to add to my fledgling Biggio relic pile.
The big score, though, was this final card. We’re going to do this one in reverse – as in here’s the backside first. *sound of truck beeping as it backs up* 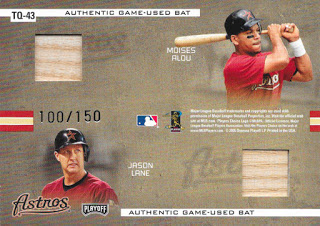 Ooh, it’s another fantastic Playoff relic card, and it’s #100/150 – a superbly round number. There’s Jason Lane again, and personal favorite Moises Alou, along with some small wood chips. Now, here’s the bit of mystery – Lane and Alou never suited up for the same Astros squad. Not only that, but this card comes from 2005 Playoff Absolute Memorabilia. As Tom and Tony and other Chicago faithful will know (somewhat painfully I’m sure), Alou had already run through his three-year tenure with the Cubs at that point, and moved to San Francisco for the 2005 season. 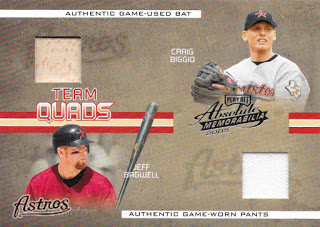 But who cares about the particulars of the back, because this glorious Team Quads single swatch (yes, there are double swatch Quads that feature two similarly sized relic boxes for each player) features the franchise’s foundation on the front. Yes, we have another Biggio bat relic – and more of Bagwell’s pants! I mean, sure – it would be nice if all four “swatches” were bat relics, but beggars can’t be choosers, and picking up a Quad relic card for just over a four dollars is well worth it in my book.
Alright, not to tease you too much, but we’ve only just begun. Things are about to get a bit more interesting – and older – in the Brubaker’s Dozen countdown.

0 Replies to “Brubaker’s Dozen Finds of Ebay #9: Relics of the Game”