Phew, I’ve been on a posting spree lately! It feels good to start clearing out the scan folders, and having gotten caught up through November is pretty darn nice. The only problem is that packages keep arriving!

What a terrible problem to have, I know. But, I want to at least post some of these cards before they start sliding down the register and I’m left recapping them four months after the fact. So here’s a fabulously swift swap with Dan, who’s name on TCDB is dsorek. Dan’s shot me some proposals before, but due to general busyness and disorganization, we haven’t connected. However, he was interested in four of the inserts I pulled from my small 2019 flagship buy, and he shot a proposal my way. George here is either playing the worst game of “the floor is lava” or is diving onto the world’s comfiest cushion, I can’t tell. 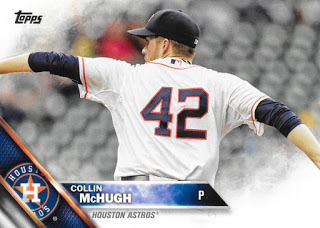 Dan also had this Collin McHugh SP I needed from 2016 Topps. I wish it was cropped just a bit looser, but it’s still pretty nice. 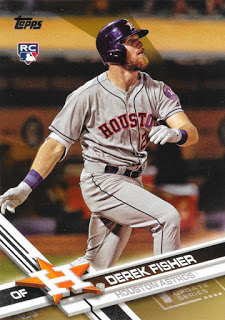 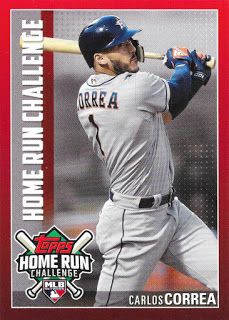 The last two cards of this quick little trade were a Gold parallel of Derek Fisher from 2017 Update and this Correa Home Run Challenge insert-slash-contest card. I know I should probably use the code and at least try my luck, but I’m going to leave this one pristine. He’s already bindered up, after all.
Thanks for the swap Dan! I’ll keep checking your want lists and see if we can’t connect again soon.