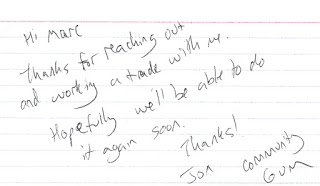 A while back I noticed that Jon at Community Gum was still trying to track down some of the recent Topps Stickers to complete his sets* and thought to myself, “hey, I have a little pile of those, I wonder if he could use any of these?”

Well, it turns out he could! So back in early October I pulled out just shy of 50 stickers and cards and sent them his way. A few weeks later, a lovely package showed up from Jon, and there was plenty of fun stuff inside.

* He still is, by the way, so take a look at those want lists and help the guy out if you can! 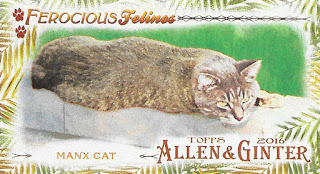 For starters, there was one of these Ferocious Felines from 2016 Ginter. I’m a cat man and always have been. In fact I’m writing this post while Amelia, my Calico, keeps my lap warm. When I first saw these, I knew I wanted to collect the set. I haven’t been actively chasing them, but I do welcome all comers. I guess I should make sure these are on the want list.

Of course, there were plenty of stickers in this trade as well! Jon did a real number on my want lists with these 19 finds that stretched all the way back to 2011. Rest in pieces, Junction Jack – you were a horrific mascot. 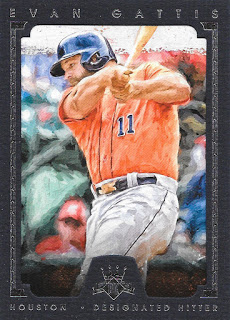 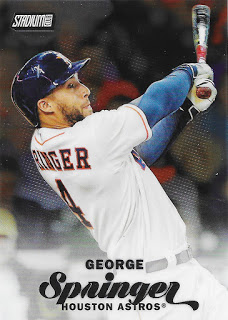 The fun didn’t stop there, however. Jon tossed in another handful of great new cards, like this framed Evan Gattis parallel from 2016 Diamond Kings and a 2017 Stadium Club Chrome of my boy George. 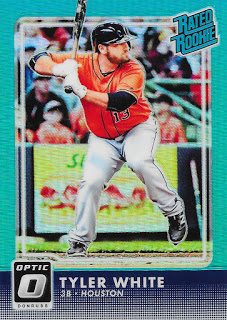 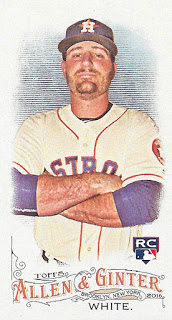 There was a shark attack awaiting me in the package as well. The Optic is a “Carolina Blue” parallel and is numbered 257/299. The mini is superb. I think once I’ve finished my 80s and 90s flagship needs (need to make those lists!), the next thing I’ll target will be the Astros A&G minis. 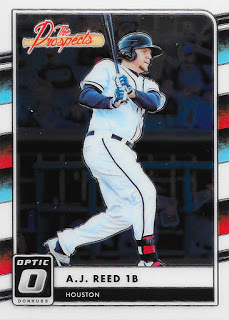 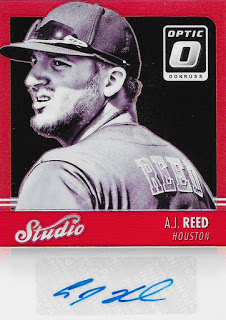 Lastly, the really fun portion of the package (ok, it was all fun) was the A.J. Reed section. He seems to be doomed as a major league prospect, but he can hit the crap out of the ball in AAA. I suppose that puts him in the Brett Wallace mold of failed first base solutions, but I’d like to see him get one last shot this season. I really wish the Astros had tried to develop him (and J.D. Davis!) as two-way players, given how good he was as a collegiate pitcher. At any rate, Jon sent me this autograph – a stunning Studio Signatures Red parallel numbered to 25. Thanks a million, Jon! I’ll be sure to send my 2019 Sticker dupes your way.