Today was Opening Day! It’s the most glorious time of the year. I meant to write something last night in order to have it up today, but by the time my fantasy draft wrapped up I just didn’t have it in me. So I told myself I’d throw a short post up before work in the morning, then neglected that route as well.

But no matter. For baseball came back to us today, in full form, and it was glorious. The Astros won, pounding three dingers to beat the Rays, including George Springer’s third consecutive Opening Day with a homer. Had he hit it one at-bat earlier, it would have been his third consecutive leadoff homer to open a season, but he put it off until the fourth.

It was more than just the return of baseball, though. Yesterday, I made my debut over at the SABR Baseball Cards blog with a post about making your own cards. It’s credited to Nick at the moment as I don’t have posting access just yet, so many thanks to him for helping get that up. If you haven’t yet, please go read it!

Opening Day seems like a pretty good time to discuss some of the scattered pickups I’ve made recently, such as this mid-60’s Exhibit card of Dick “Turk” Farrell that I snapped off the ‘Bay. I’ve been looking for more of these, but typically pass because the price isn’t right. Turk took the ball on Opening Day for the Colt .45s in 1963, a game which they dropped 2-9 to San Francisco. 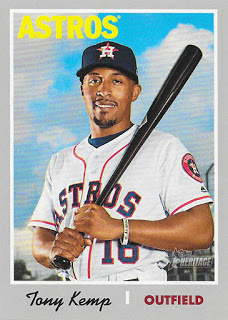 Let’s talk about the Astros in Heritage a bit while we’re at it, shall we? I have bought well more of this stuff than I’d originally planned, but I love the ’70 design and I’d rather sink extra bones into picking this up than flagship. These two cards made me particularly happy. I love some Tony Kemp, and I’m very excited about Josh James and Framber Valdéz, both of whom made impressive debuts late last season. 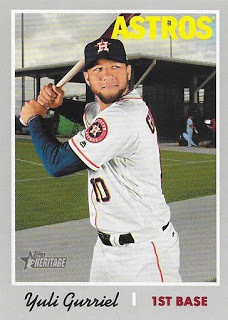 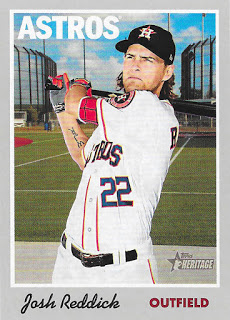 While Heritage photography is essentially a “stand here and get shot” affair these days, at least the guy Topps sent out to Astros Spring Training varied his angles a bit. These are shot on the backfields at the new facility Houston shares with the Nationals. Or rather, they are shot on the sidewalk between the backfields. I love the “this is definitely Spring Training” vibe, and while it’s not quite the same as old pre-game warmup shots, at least these feel like close cousins. That’s a building with one of those giant five-person mounds behind Gurriel, and you can see the backstop fences of the practice fields behind Reddick. 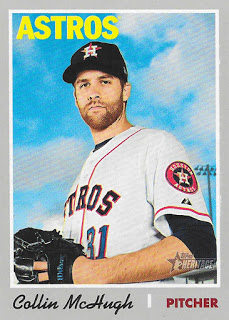 Thanks to some attrition, these two dudes both have rotation spots again, but both also seem to have vastly improved over the past couple years, so I’m fine with it. I’m also excited to see them both get a nice pair of cards. 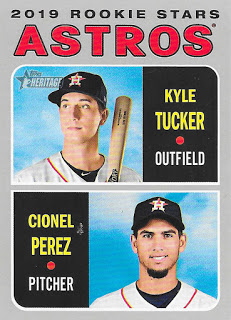 Back to the subject of new faces. While it was evident that top prospect Kyle Tucker would get into the set (he also has the SP solo version of this card), I’m glad Cionel Pérez is getting some cardboard this year. He made the leap straight from Double A ball, mainly thanks to the team’s proximity. It’s a lot easier to call up a AA bullpen arm from 3 hours down the road than flying a AAA arm in from California. But he showed some nice stuff in his second call-up, and it’ll be fun to see him develop more this year. We also got our first card of Aledmys Díaz in some Astros duds, although there’s a good chance this is a ‘shopped Toronto shot. I was hoping we’d see Robinson Chirinos in a Houston uniform, but alas he’s still on the Rangers in this set. 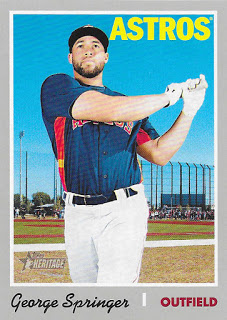 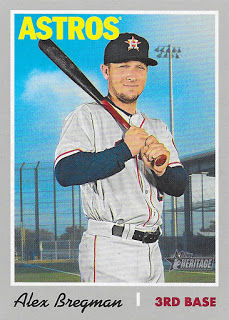 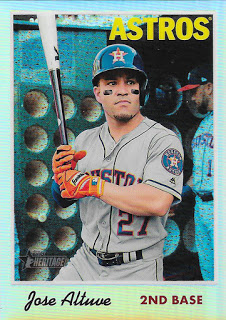 There are SIX Astros in the 400 series SPs, which is just insane. I scored two of them in my first three blasters, so I felt pretty good, and have since picked up a third in trade (Verlander). I’ve still got to track down Correa, Altuve, and Cole. The Springer photo makes me very happy in that you can actually see people in the background!

And speaking of that Altuve SP, I pulled a refractor copy of it! Holy moly, what a card. This actually feels like a ’70 Topps shot, and I’m on board. This fell out of my first hanger pack, so it was absolutely worth the price of stopping by the card aisle on a Target run. 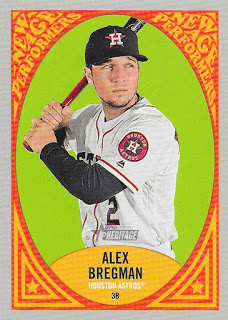 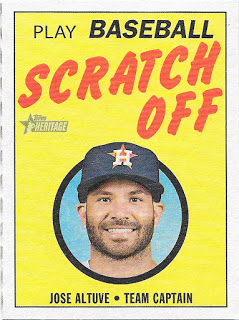 I’ve pulled a few more Astros inserts as well. I suppose I can attribute some of this to the recent success of the club and there being more Astros cards in the past couple years of products. There are certainly more in the higher-tiered sets than when I first came back to the hobby in the days of the 100-loss seasons. But I feel that I got particularly lucky when opening Heritage this year – even for as many Astros as there are in cards these days, I felt I pulled a lot more than usual. The Altuve Scratch-Off is my favorite here, and I got enough of these that I decided to go for the set as well. 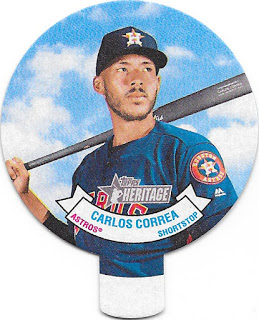 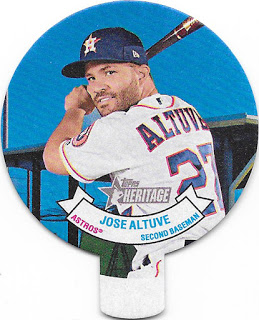 See what I mean? I pulled both of the Astros in the fifteen card Candy Lids inserts as well. That’s just bizarre. Normally I’d get like three Luke Voits, or whatever third-tier Yankee semistar Topps is shoehorning into these sets. I, uh, kinda love these too, and I’ll probably chase a full set of them. They seem to be in relative abundance and it’s a smaller insert series, so why not?
Last, but not least: I found a very special rookie card from my childhood when at my folks this week. My mom watches Lil Bru every Wednesday, relishing every minute of that grandma time, and I typically head down to pick her up after work is done. 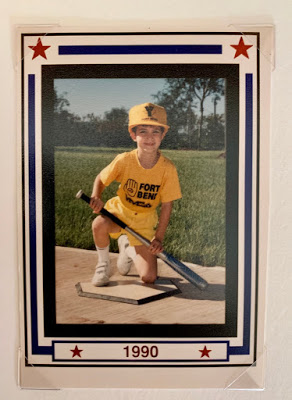 I’d noticed an old Little League photo of my brother on the shelf, which prompted mom to pull down an album. That’s a bonafide RC of little Marc from his days as a freshly drafted Tee-Ball prospect. Sure, it’s a little miscut, but I’ve heard the print run on these babies is prettttttttty low.

I’m going to have to take the time to scan some of these next time I’m down there.

Baseball is back, y’all, and it’s still the best.

0 Replies to “Debuts, Left and Right.”