by MarcPosted onMarch 10, 2019July 8, 2019
One of the hobby phenomena that emerged last year was that of the “virtual dime box sale” via Twitter. Brian of Play at the Plate fame has hosted a few of these, and they seem to have really caught on, as I’ve noticed more and more people trying their hand at these types of cardboard dispersals. 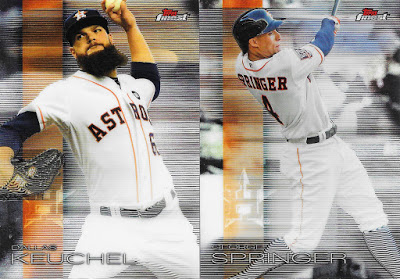 I technically participated in three of Brian’s sales last year, but my winnings from the first two were packaged together. One of the things I really enjoy about the format is that it provides a way for me to pick up some stray cards from sets that I otherwise don’t see or buy, like this pair of ‘Stros from 2016 Finest. I definitely don’t see Finest hanging around, and on the rare occasions when I make it to the card shop I’ve got other targets in mind than gambling on a pack.

These 2018 Bowman Platinum pickups were another first glance at a set I otherwise wouldn’t encounter. Bukauskas is one of the big pitching prospects on the radar, so it’ll be interesting to see if he makes it up to the club this year. 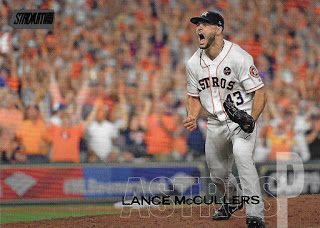 These sales allowed me to fill some holes from newer sets as well, such as this great 2018 Stadium Club of Lance McCullers. At least I thought it filled a hole, and then it showed up and turned out to be a Black Foil parallel! I got an even better deal than I thought!

And speaking of parallels, this virtual dime box was rife with them. I snagged three of the Silver Scripts from 2000 Upper Deck MVP, and only just now as I’m typing this did I notice that it actually says “Silver Script” down the side of the card. It’s fun to see how team photographers have changed from the standard muslin or paper backdrops and started doing some real wild things for photo day.

While we’re on the subject of photo day, here’s a pair of low-numbered parallels from 2005 Studio which I picked up from Brian. These were not of the dime or quarter variety, as most of the rest was, but 2 bucks a pop. Well worth it for cards that are numbered 11/25 and 16/30, respectively. Also, this is a really nice and clean set, despite its umpteen parallels. They’ve got an early cabinet photo feel to them. 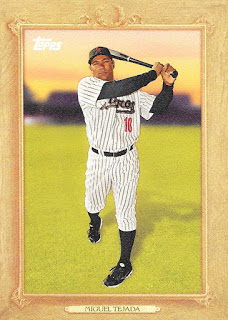 A couple more faux old-timey pickups here, with what I believe is a 2010 Turkey Red of Tejada (don’t remember the year offhand) and a lovely red parallel mini of Altuve from 2014 Gypsy Queen, which is numbered 3/99. The Tejada might be one of the few cards featuring an Astro in pinstripes that I actually objectively enjoy. 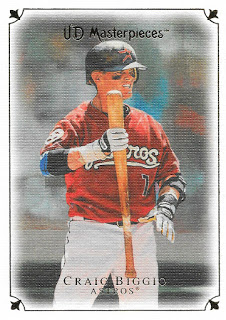 I was late to the game on many of the Biggios that Brian posted, but that didn’t stop me from picking up a couple of new additions along the way. That 1999 Sports Illustrated highlights Biggio becoming the second 50-50 player in major league history, joining Tris Speaker as the only other player with 50 doubles and 50 steals in a season, which is pretty darn incredible. The more modern card comes from the fantastic 2007 Upper Deck Masterpieces set. I’d love to pick up some of the framed versions. 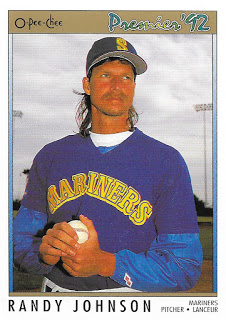 It wasn’t all Astros in the bunch, however. A virtual dime box such as this was ripe for the plucking when it came to finding some other swell cards for the collection, including a shot of Randy Johnson as a proud member of the “windbreaker under the jersey” club, and a lovely 1996 Hideo Nomo SP, where he seems to be checking out his own pitch grip. This shot of his windup also made me wonder if he wasn’t hiding the ball enough, though. 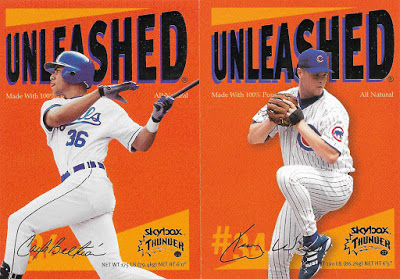 I couldn’t resist these 1999 Skybox Thunder inserts. I have a couple from back when I was collecting (signed, if I recall correctly), and loved the design which is riffing off a Wheaties box. I snapped up a Beltran and Kerry Wood, with the thought of writing Kerry. 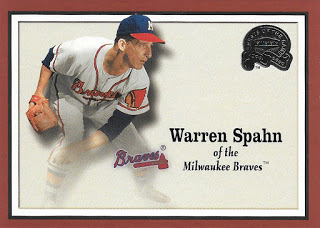 Spahnie was the first bona-fide HOFer I ever met* and certainly the first guy of whom I ever tracked down a vintage card at a show. It was a 1963 Topps, and I got it signed in beautiful blue. As a kid reading up on baseball history with a dad who actually saw Spahn pitch, I fell in love with the lefty, so I maintain a small PC of him. This 2000 Fleer Greats of The Game is, well, great.
*Okay, technically this goes to Bags and Biggio, but I’m not talking about active players who would become HOFers. If we consider sports outside baseball, this might fall apart as well, but Calvin Murphy wasn’t elected until 1993 either, so I’m still unsure. 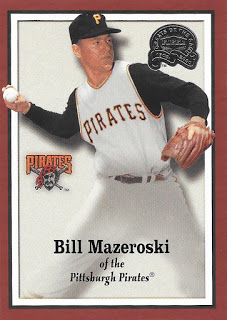 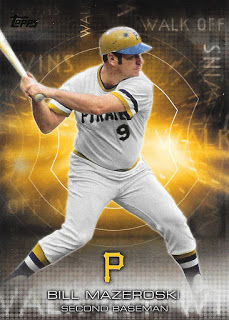 I also added a few more from that set, including a Maz for the PC and a recent insert featuring beer belly Maz from later in his playing days.

Well, how can you not love this Julio Franco? I bet he could still smack a dinger. Time to bring him back, I say. 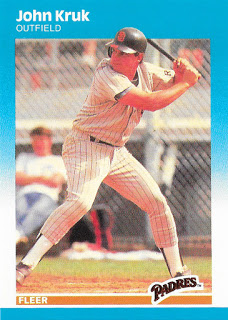 A couple more random pickups – a Kruk RC and a nice Carew from the subset that led off the 1991 Bowman set. Love the little foil-stamped jersey up there. 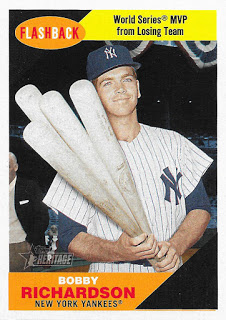 I’ve got a mini-PC of Minnie Minoso as well, so the Archives Reserve was an easy add to my growing pile. I picked up the Bobby Richardson with designs on writing him again. I need to get off my butt and do that, because it’s a great photo. 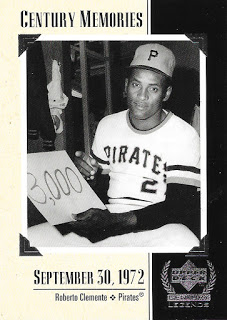 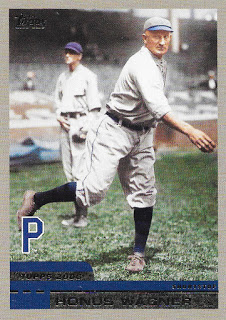 I couldn’t pass up these two Pirates legends, either, particularly the Clemente. The Wagner is a fun remake from one of the now decade-old or so Topps releases. I’ve seen the photo before, but I actually kind of like this colorization. 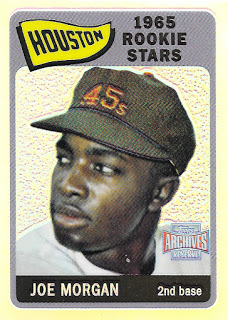 One last pair of shiny cards here before we go. The Pirates from my father’s childhood became early vintage favorites long ago, with Face high among them, and I couldn’t resist this card of the Baron. I’m still split on whether it makes my next mailing to him (another one I’ve been putting off for too long). The Morgan is one of the reimagined solo rookie cards, dropping Sonny Jackson out of the frame.
There are a couple other posts like this to come – including one more sale from Brian. If you don’t want to miss his next sale, hop on Twitter and go follow @mrbkscards.