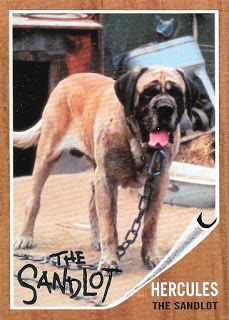 It’s mid-March: Spring Break has sprung, and while tomorrow we will all wonder where the hell our hour went, that doesn’t mean too much to me directly. Now, there will be plenty of secondary benefits – a couple of my coworkers will probably spend next week in Austin, pulling off activations at SXSW. So the office will be nice and quiet. My lovely and incredible wife gets to take a break from teaching and hang out with our kiddo full-time, so that will be nice and I’m sure I’ll notch some good family time. Right now, they’re both napping, so I’m going to take this moment and knock out the final trade post of 2018, then maybe go for a quick run. We’ll see how things are when I wrap this up.

This was a TCDB trade with another new swapping partner, Gary (woodmangb is his handle). Gary had spied some of my spare ’64 Topps cards on my trade list and sent over a Herculean proposal. I knew a couple had been sent out TTM, so I told him I’d dig around and counter with whatever I found. That cut the list of 15 or so in half, so when I sent the counter back to him I kindly asked him to adjust what I’d be receiving to whatever he thought was fair.

Spoiler alert: he did not. This Sandlot insert from 2018 Archives was one of the few new cards in the package.

Among the other faux-vintage was this quartet of 2018 Heritage. Seeing the Spring Training facilities in the background is fun – for a bit. I hope Topps has the photographers start mixing it up. 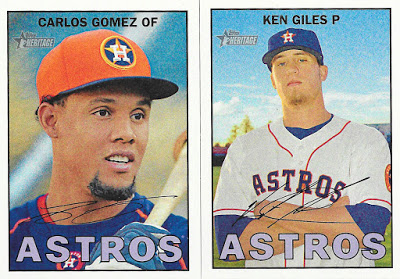 The last pair of throwback cards were these two 2016 Heritage needs which were still hanging around peskily on my want list. Aside from the color swap and action variations, I still need two cards to finish that team set: #239 – AL Batting Average Leaders (Altuve) and #710 – Tyler White (pesky high number SP). 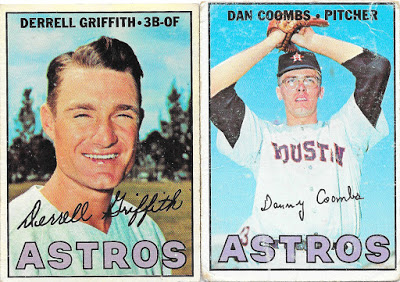 But enough about new cards, let’s talk about the tasty pile of vintage that arrived in this package! 2016 was a rehashing of the 1967 set, so that seems like a fine place to start. Hatless Derrell Griffith provides me with a dupe so that I can finally send him a TTM request, and I love the shot of 6’5″ Danny Combs looming over the photographer. 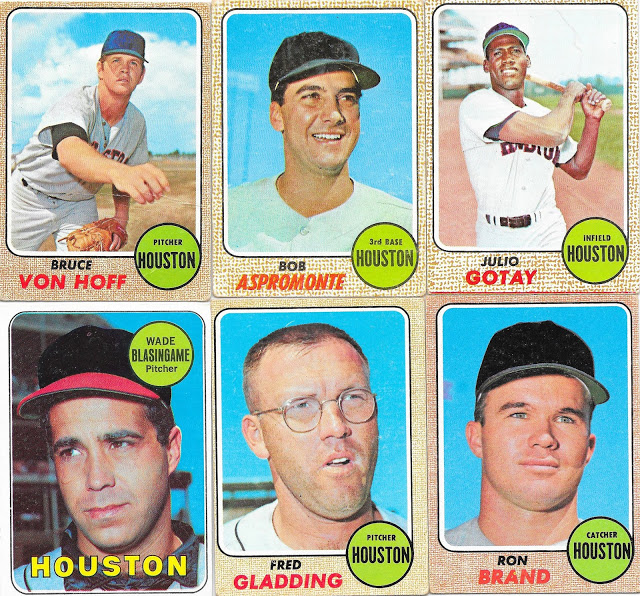 Ah, the lost logo years. I picked up a six-pack of black-capped (or hatless in Gladding’s case) HOUSTON players. Gary was really willing to do a number on my vintage needs. The Gotay is my favorite here, and you’ve gotta love the “Hello, I am doing a Sports?” shot of Bruce Von Hoff.

After some chatting on Twitter with Nick and Mark Armour, I can already see how 2020 Heritage is going to disappoint if Topps doesn’t encourage some more differentiation in the photo selection. Look at how awesome these are! Even the “action” shot of Alou is superb. I wonder if we’ll see any nods to these – maybe a Brooks-ish Tatooine card, or the infamous Joe Morgan shot. 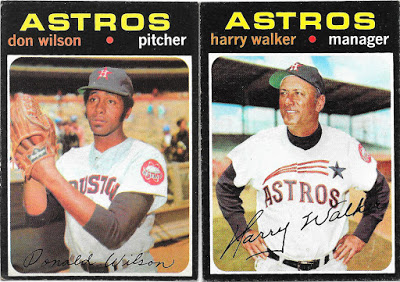 But posed shots can be marvelous as well. While the Geronimo up there is an easy favorite, it’s hard not to love somber Don Wilson and this great card of The Hat in his shooting star duds. That makes me think the Walker must have been a Spring Training shot.
Here’s where you think, “wow, that’s quite a pickup for 8 commons from 1964!”
Hold your horses, pal. 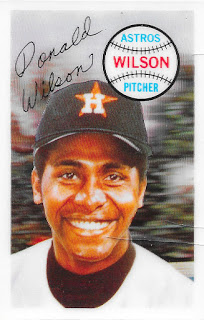 These two 1970 Kellogg’s are carrying cracks, but they’re still winners in my book. Suffice it to say that I was quite surprised that I was even holding them. They weren’t the only ones, either.

I know, yesterday was National Cereal Day, I should have gotten off my butt and written this earlier 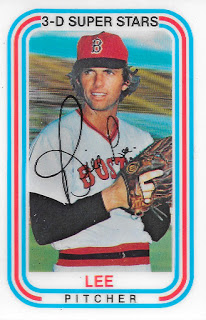 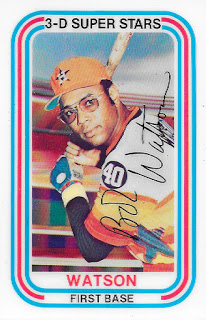 No, this Spaceman didn’t get lost on his way to the Apollo training. This ’76 Kellogg’s of Bill Lee was the only non-Houston card in the bunch, but I picked him up for my little PC. The Watson is downright beautiful, look at all that glorious color. 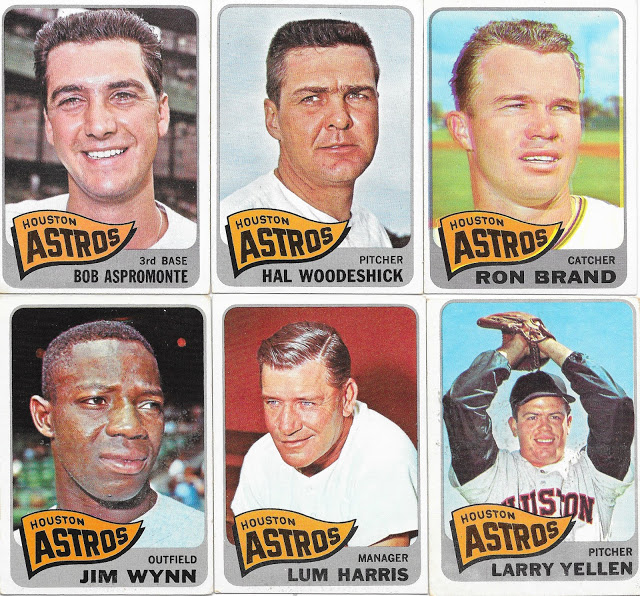 Bam! Here’s another six-pack, these of the newly-monikered Astros in 1965. And because we don’t have photos of that “eh, slap an H on the star” logo, we get a bunch of capless dudes and an airbrushed Larry Yellen. The second-year Wynn is the winner of the bunch, and Lum takes home the prize for best haircut, which brings us to Who Wore It Best: Aspromonte or Woodeshick? I think I’m going to have to side with Hal here.
So wow, what a trade, right?! Gary, thanks for all that glorious fifty year old cardboard, it made my day!
Oh wait, I saved one more card to show off. Let me see, where did it go….. 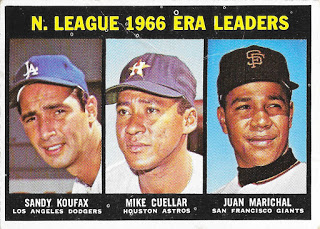 Sweet Moses! Look at this outstandingly beautiful league leader card! This was the one that I was certain would get pulled off whenever I countered the trade, because I mean, look who’s on it! But Gary, in a moment of enormous generosity, decided that he wanted to share its splendor with another collector. I had this pegged in the category of “drop some money on one in the far future” cards, but wow!
Alright, I’ll let you all run off to shoot Gary some trade proposals now. Thanks again for the fantastic swap and being so generous, Gary!