Alright, now we can discuss the more recent package which Mark Armour sent my way. These came in a few weeks ago, after I lamented on Twitter that there were SIX Astros among the 400-series SPs of 2019 Heritage. Mark reached out and let me know that he had a Verlander to send my way – and something else of note. I, in turn, piled up a healthy stack that chopped his want list for the set in half. 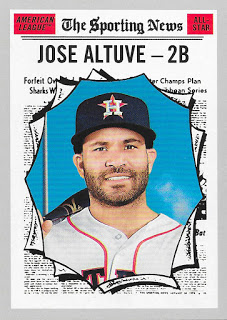 I mentioned the Verlander in the intro, so that’s no surprise. Mark also sent a few spare Astros my way, which I’ll use for autograph hunting, and this Jose Altuve All-Star card. That completed my “base” team set – though I still need the Altuve and Correa cards, which are both SPs. 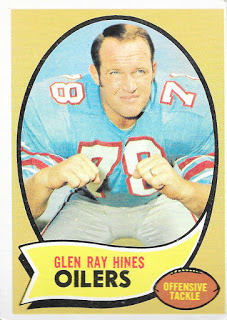 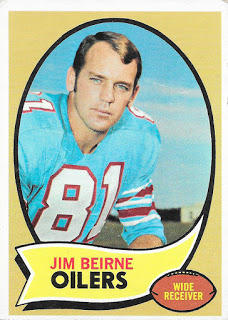 Mark did send a little true vintage my way, albeit in the format of football cards. That was fairly unexpected. I’ve hung onto a small pile of non-baseball stuff – players that piqued my interest, cards of a few local favorites, etc. But I mainly abandoned any non-baseball collecting. These are fun, though – having a few examples is nice and gives me a bit of design inspiration when it comes to making customs. Hines passed away in February, but Beirne is still with us, so I may write to him. 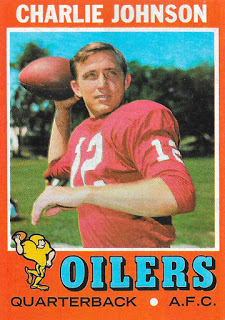 There was one more football card in the pack to accompany the pair of 1970s Topps, which was this colorful blast from 1971. The little cartoon guy down there reminds me of Woodstock, and I can’t glance at this without thinking of Charlie Brown now.

Johnson hails from West Texas and put together a 15-year career as a quarterback, including a few excellent seasons for St. Louis in the early 60’s. He spent 1970-71 with Houston before moving on to Denver to wrap up his playing career. He’d graduated from New Mexico State with a chemical engineering degree, and continued his studies during his football career, eventually earning a doctorate. He went back to his alma mater in 2000 to oversee their chemical engineering program, and was a professor in the department from 2004-2012 – quite an interesting career path. I may write him as well.

I mentioned that there was one other card Mark had mentioned to me on Twitter. This was a couple weeks before we agreed to the trade, which immediately put a bug in my ear to be on the lookout for some Red Sox cards to send his way. I did send some samples from my Starchives customs as well, but also managed to dig up a few jersey relics as a thank you for setting this aside for me. 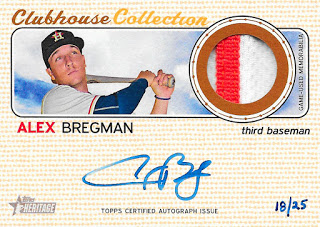 Wowsers! When Mark mentioned this one to me in a PM, I about fell out of my chair. I very nearly fell out when opening the package and finding it inside as well. This is an exquisite piece of cardboard featuring my favorite third baseman in the game right now. Sorry Matt Chapman, you’re second banana here (Nolan is probably third, and then you can essentially start drawing names out of a hat). It was amazing to watch Bregman come into his own and cement himself as a star across a full season last year. I love the energy he brings, the range and arm he displays at third, and the fun demeanor with which he goes about the game. And I LOVE THIS CARD!

Thanks Mark! You really knocked my socks off with this one.

0 Replies to “Not Enough Armour For This Bomb”