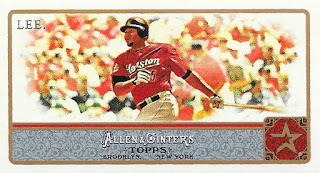 I got another superb trade offer from Bill (minibbcards) over at TCDB. Of course, like any trade with Bill, there were plenty of minis involved.

I’m still deeply indebted to him thanks to the very unexpected surprises he dropped into the last package, so when he shot me an offer I immediately jumped at it. This horizontal mini of Carlos Lee from 2011 Allen & Ginter is just fabulous. I do love it when Ginter features in-game action shots. 2014 had some of these.

Several of the minis that Bill sent my way were from sets that I hadn’t seen before – at least not in mini form. That included the Topps 206 and Topps 205 sets from the early aughts. The Oswalt and Kent depicted here are “Sovereign” backs. The Mike Hill rookie on the right is a Tolstoi back, and also a SP.

Bill also sent several minis that landed in my PCs as well. Netting these Bagwells, a nice late-career Maz on a 2013 GQ mini, and a 2006 Bowman Heritage mini of Biggio felt really good. 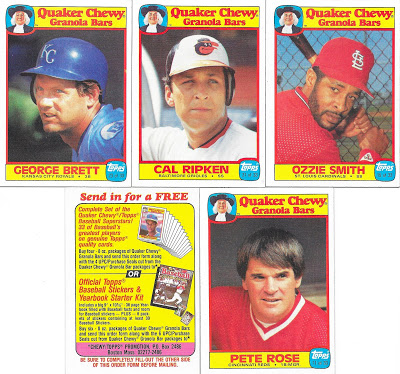 There were a few other cards involved in the trade as well. Bill, being the excellent trader that he is, included a pack of extras once again. I’m never going to get out of this trade deficit at this rate, so I hope I pull some good stuff out of Ginter this year for him. Out of these Quaker Chewys, only the Brett was included in the transaction proposal. The Ripken, Smith, Rose, and offer card were all bonuses. I’m glad he sent the offer card; I probably wouldn’t have bothered to track it down on my own but it feels really nice as an anchor to the set. 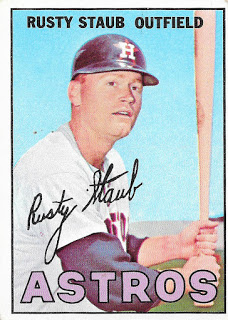 This lovely 1967 Staub was the final card from the actual trade proposal. He’s in very nice shape, apart from some ever-so-slightly softened corners. This provides some very nice assistance to my goal of finishing off the Astros team sets from Topps flagship. Of course, my goal on the year is to finish them from 1970 onward this year, but I’ll need to knock off those 60’s cards eventually. 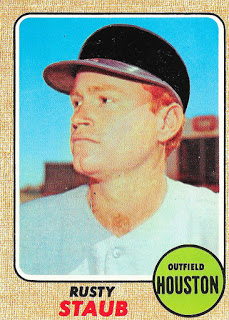 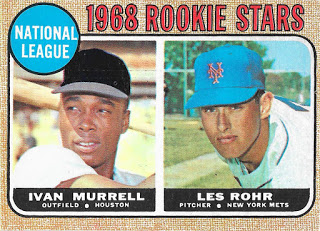 And thanks to these two lovely extras from Bill, I now have three fewer cards from those 60’s team sets that I need to track down! That Murrell is his only Astros card, and a tough semi-high number at #569. Then there’s the second Staub in the package, clearing off another card of Le Grand Orange off the list.

There were two more bonus cards in the package as well. One was this delightful black & white parallel from 2018 Stadium Club. I’ve got the base and black foil versions of this as well, and I’ve got to admit that it’s fun to have a few versions of this one. It doesn’t hurt that this was a photo from Lance’s ultra-dominant ALCS appearance in 2017 when he pounded the Yankees with twenty-seven straight curveballs. 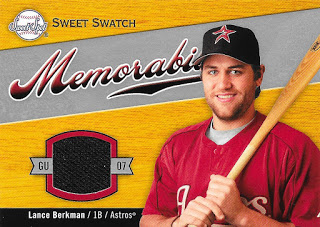 Perhaps the most surprising addition of the package, though, was this great jersey relic of Lance Berkman from 2007 Upper Deck Sweet Spot. I definitely did not expect this as part of a throw-in to an already excellent trade. Thanks for all the great cards, Bill! I definitely need to find something nice for you, so I’ll keep my eyes peeled.