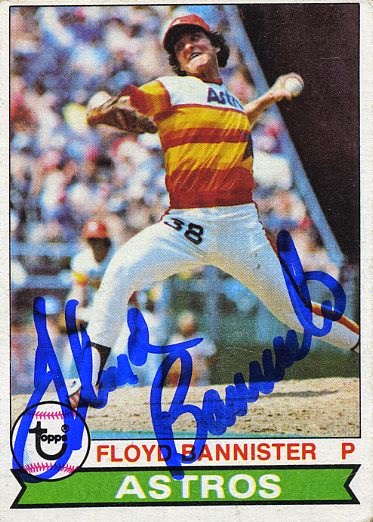 Another pair of returns managed to find their way into my mailbox this week, bringing my annual total to three dozen. Several of my requests are still at large, and so far I’ve only received three RTS: Bob Watson, Gerald Young, and Henry Rollins.

Rollins seems to have stopped signing, and Young seems to be poor timing on my part as I’ve seen a few more returns from him posted online. I believe I just need to find an updated address for Watson.

This week, however, I netted another Astro to my collection with a return from long-time lefty Floyd Bannister. Though I generally knew him from his latter days with the Royals, Bannister started out with the Astros, and was the number one overall pick in the 1976 draft.  He was kind enough to sign 3/3 for me, including a ’79 Topps and ’86 Fleer, two cards with great looking striped uniforms. Total turnaround time was two weeks. 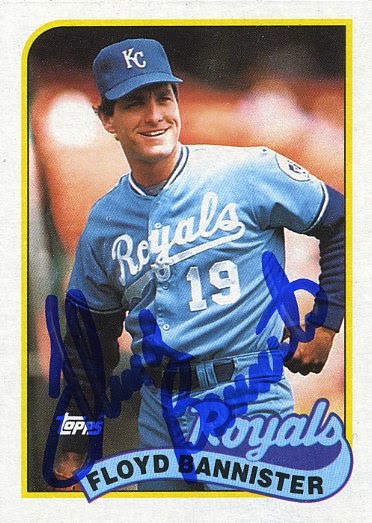 My other return this week was from former Texas Ranger, Rusty Greer. I always liked him –  I’m not sure if I just thought his name was nice and gritty, or perhaps it was the fact that in All-Star Baseball ’99 on my Nintendo 64 he was a damn good player.

His claim to fame came early in 1994 when as a rookie he made a diving catch on a ball hit by Rex Hudler, saving an eventual perfect game by Kenny Rogers.

Rusty got back to me quickly, getting my cards back in just 8 days, and signed all three that I sent his way.

I dropped a few more requests in the mail this week, so hopefully they’ll make their way back before too long. I didn’t really put much in the mail the past few months, but I’d still like to try and reach 100 returns in 2014, something that seems pretty doable if I’ll just sit down and do some writing. Oh, and I need to buy more envelopes and stamps. 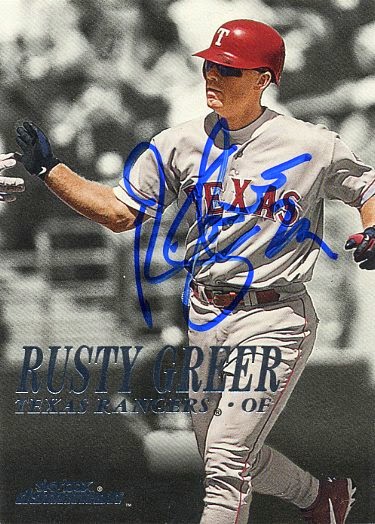