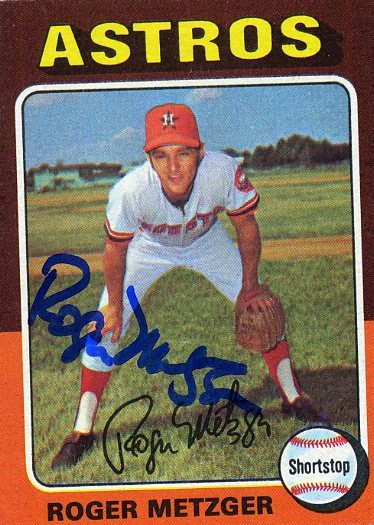 I opened up my mailbox yesterday and was pleasantly surprised to find another autograph return! This one comes from Roger Metzger, and took just two weeks to make its way back to me. The ’75 doesn’t really look that  crazy in hand, but it’s definitely miscut.

Metzger was a slick-fielding shortstop with a mediocre bat, but his superior defense kept him in the lineup for several years in Houston. He was considered the finest defensive shortstop in the history of the club until the arrival of Adam Everett in 2000.

Metzger’s reply brings my total on the year to 34, and adds another Astros player to my collection.

I’ve got a lot more to post as I made a trek to my LCS today, but that’ll come later.