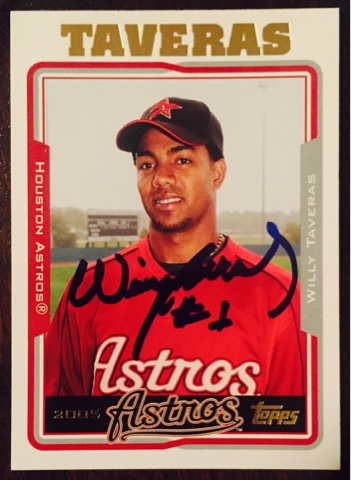 Opened up the mailbox the other day and lo and behold, another ‘Stros autograph was awaiting me!

This time it was none other than 2005 Rookie of the Year runner-up Willy Taveras, who put together a pretty strong season in 2005 and helped the Astros to the World Series. Sure, the grand majority of his hits were singles, but his speed on the basepaths made him quite the threat.

Looking at this 2005 Update card, it’s easy to mistake him for a freshly drafted prospect, but Willy T might as well have been nicknamed Willy Toothpick. His slight frame never filled out much in the big leagues.
Willy just so happens to be one of my wife’s favorite players, so when I noticed that the local independent Sugar Land Skeeters signed him for 2015,  she got a good laugh. I promptly drafted a letter and dropped this RC in the mail. After a month of waiting, I’ve got one more Astro-graph in the books. Willy, by the way, is sporting a .274 average with 37 hits in 34 games. And, true to form, those hits are 2 doubles, 2 homers, and 33 singles. He’s also 11-for-12 in stolen bases, with 9 walks, 21 strikeouts, 19 runs scored, and 10 RBIs. Not too shabby.
Still scanner-less over here, and definitely still mired in schoolwork. Just gotta keep up the grind, right?
– Bru