Welp, that Stadium Club post wasn’t supposed to go live yet – I’ve still got some old trade posts to get through before anything else. That’s complicated by the fact that I have had a new string of trades rolling in over the past week, and nice stack of TTM returns.

The good news is that I have a scanner once again. My printer crapped out on me this week, and it’s the sort of thing I need as an MBA student. So I perused Staples website and found a deal on a 3-in-1, and voila – new scanner!

The cards in this post weren’t done with that, however, because I scanned these way back at the end of March. That’s when I received a fat stack of cards from The Junior Junkie, and included in the package was a string of Mardi Gras beads. 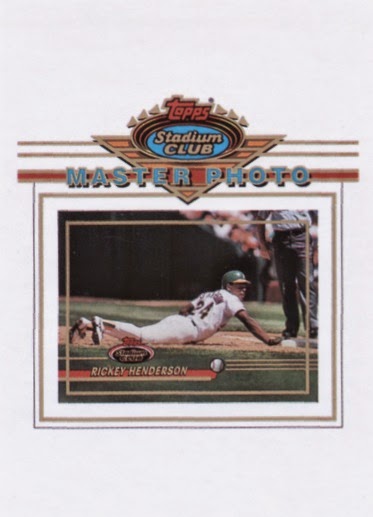 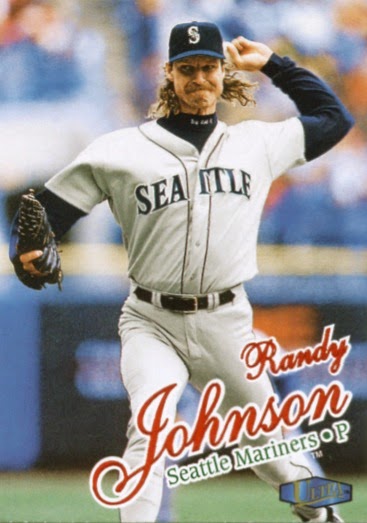 Our man TJJ did a thorough job of hitting up my player collections, starting with these two. That’s not a Stadium Club Master Photo, but rather a card to get one. But it’s Rickey Henderson, so it goes in my collection no questions asked. As for the Randy Johnson, it’s just about perfect. I loved 1998 Ultra. I thought the blue text (used for NL cards) looked better, though. 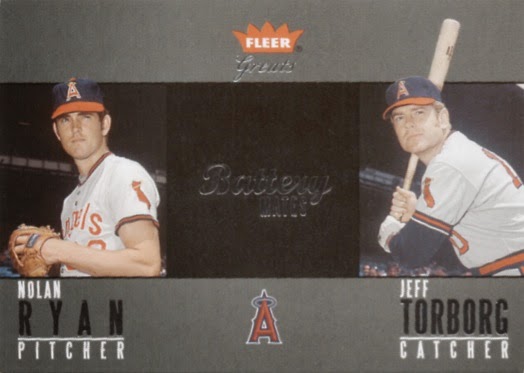 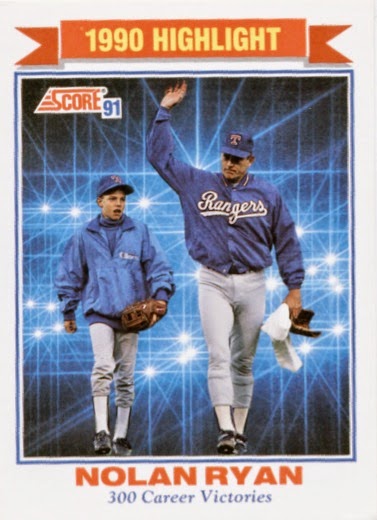 He threw in a pair of Nolan’s, featuring some supporting guests. That’s little Reid Ryan on the far left, current president of the Houston Astros. 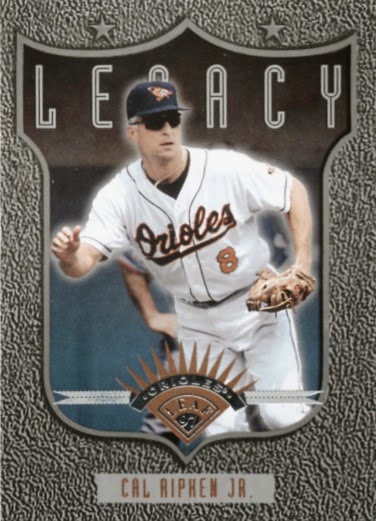 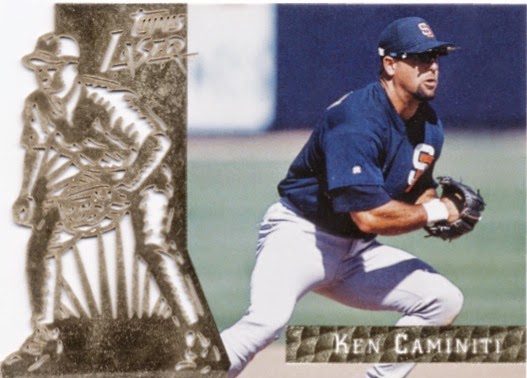 Some more guys I love, including the crazy Topps Laser of Ken Caminiti. This set was wild, and I loved it. 1997 Leaf also had a nice spot in my mind. The base set was nice and clean, but this Cal Ripken legacy is even nicer. 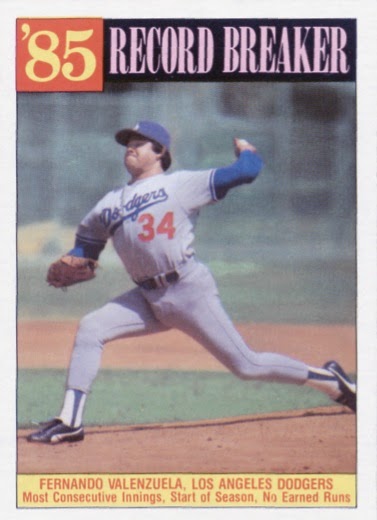 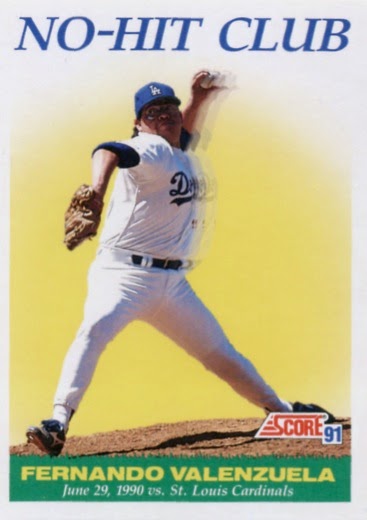 The Junkie boosted the Fernando-mania of my collection with this package, including these two cards celebrating notable achievements by the dynamic lefty.

I’ve been slowly accumulating these Highlight of the Year cards. I think they might make for a neat insert set to chase. Anyhow, the Junkie knows I love me some Canseco. Do you follow this guy on Twitter? His posts crack me up.

Puuuuuuuuddgeee! This package had plenty of my favorite catcher. First, we’ll start off with stiff-faced determined Pudge.

Let’s fast forward into full-throttle, all out yelling Pudge.

And then there were these – the, “Oh yeah, he played for that team,” cards. Sigh, I wish I could forget Pudge on the Yankees. That’s still a great looking swing on that Nats card. 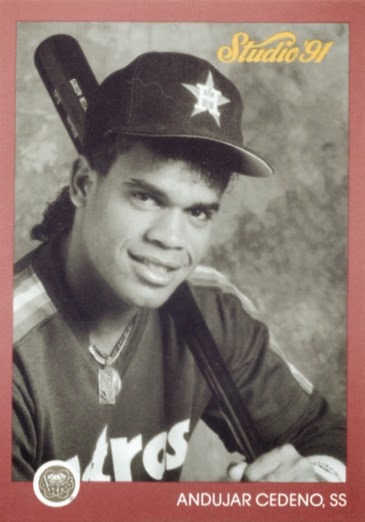 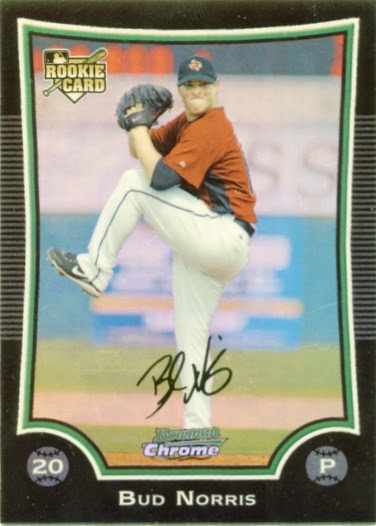 There were tons of Astros as well, lest you thought the Junkie would neglect my favorite team. Here’s a pair of nice rookie cards. The Cedeno is a Studio preview from ’91 Donruss, and that’s a Chrome studly Budly Norris.

Biggio cards represented the bulk of the stack, and these two are fantastic examples. Here’s something that I learned recently – Biggio used a no-knob bat throughout his career. I heard the Geoff Blum mention it on an Astros broadcast – he typically rotates in with Alan Ashby on the Astros west coast trips – sometime around induction week. Blum referred to it as a “Ty Cobb” bat. Sure enough, I dug through my Biggio cards and he stuck with it his entire career. You can see a good shot of it here on the Topps Embossed card – just a little flare at the end, but no knob. 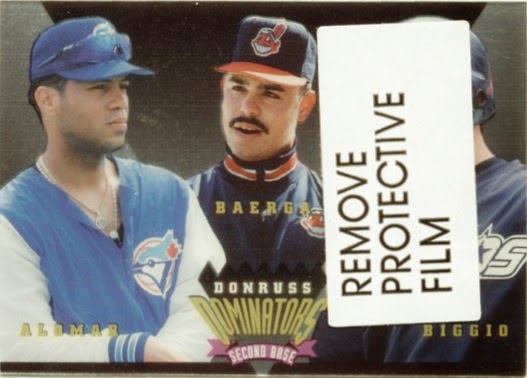 What’s this? Oh this simply will not do. Maybe if it was covering up one of those other guys I would consider leaving it. 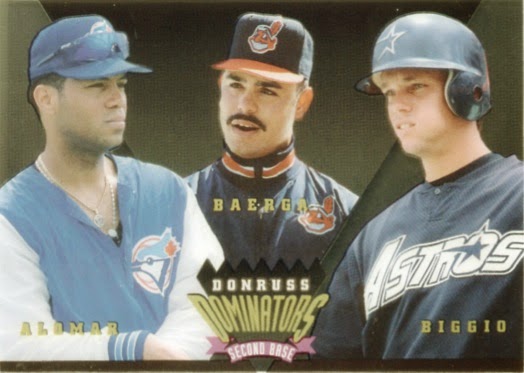 But Biggio must be free! Two out of three in the Hall, not a bad card there. 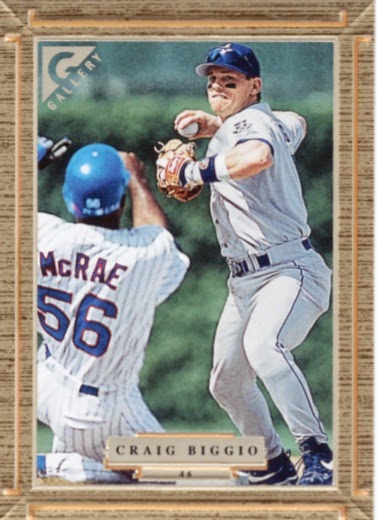 Okay, let’s wrap up Craig’s cards with a few artsy versions. Brian McRae has fallen victim to a double-dip on a rather nice looking Topps Gallery card. The only thing I don’t like about this set is the tiny card number on the front, below the name. Why on the front? It’s almost unreadable, too.  I like this Diamond Kings card, though I think these sets got a bit out of hand. 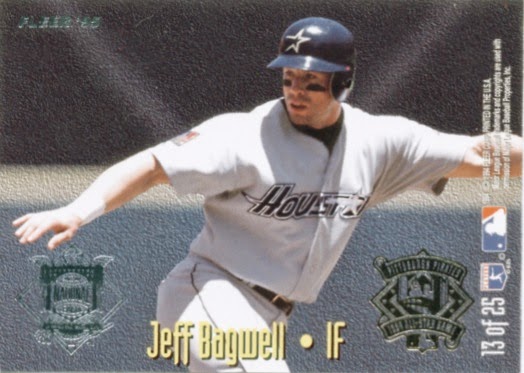 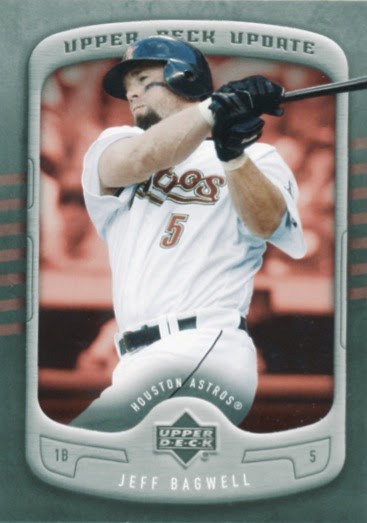 Ok, closing out this package are a couple of Bagwell cards I needed. The ’95 Fleer is yet another example where the NL gets stuck on the back side of a double-player card, with Frank Thomas on the front. I remember this frustrating me as a kid. Well, no matter. I’m just happy to knock a couple more Bagwell’s off the list!
Thanks again for the cards, Junior Junkie!
– Bru

0 Replies to “Time Hop: Fat Tuesday with the Junior Junkie”