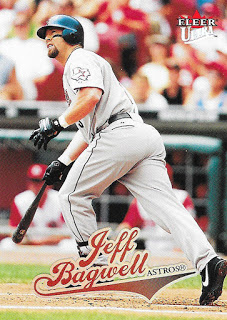 Whoa. Here’s a trade I really should have highlighted last year but absolutely failed to post. This one is a solid year old now, and it was quite a whopper of a trade. I sent about 280 cards over to Ryan, and in return he shot me back a solid 200 card stack filled with Astros goodness, including some parallels, oddballs, rookies, even a relic! Plus, there was a new Mazeroski in the stack as well. Let’s see what I can recall about all the stuff I scanned.

First up is a 2004 Ultra Jeff Bagwell. This set was really nice – several of the Ultra sets in the late nineties and early aughts were – and was what my mind immediately hopped to when I opened 2017 Stadium Club for the first time. 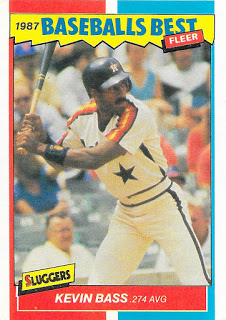 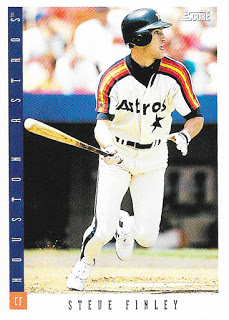 We’ll shift to the outfield next – a rad oddball of Kevin Bass from 1987 Fleer Baseball’s Best – Sluggers Vs. Pitchers set. He looks ready to do some damage. Meanwhile, Steve Finley looks like he could be zipping off for yet another extra-base hit. I think 1993 Score is wildly underrated, by the way. 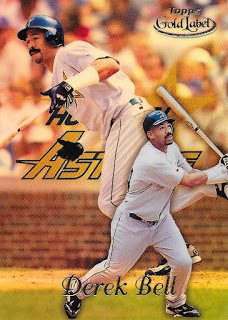 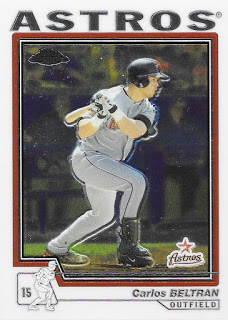 More outfielders, this time of the shiny variety. Here’s a stellar Topps Gold Label from when it was a superb set, featuring Derek Bell in full Sears Portrait™ mode. I also netted a card of Carlos Beltran from his first stop in Houston – the one where he didn’t quite make a World Series. I was happy to see him get a ring this year. While his role was relegated to “veteran presence” and “extra coach who played some DH,” he was certainly a valuable addition this year. Back in 2004, though, he was truly something to watch. His postseason performance then was one of the most spectacular things I’ve ever witnessed. 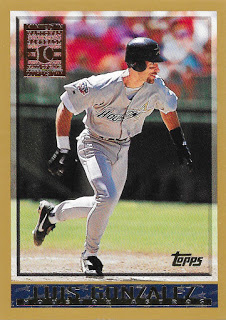 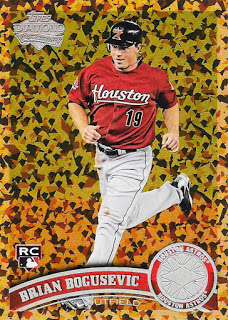 Let’s stick with the outfielders. Here’s a pair of rare parallels, including one of the elusive 1998 Topps “Minted in Cooperstown” variety. I think I pulled two of those back in my childhood, and finding any of the three stamped parallels from the 1998 Astros (Cooperstown/D-Backs/D-Rays) is a real win in my book. Of course, you’re all pretty familiar with the Cognac Diamond Anniversary “Liquorfractors” from 2011 Topps. Someday I’ll chase down full team sets of this, but for now I only have a couple. 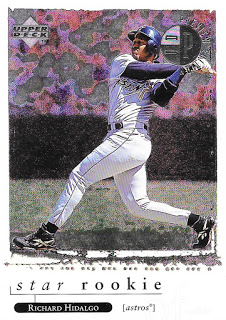 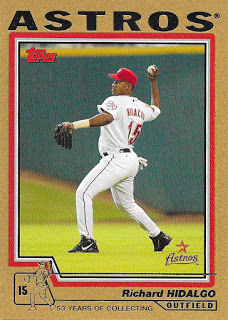 More outfielders! Well, one outfielder – and one that could hit pretty damn well. The card on the left is one of the 1998 Upper Deck “Rookie Previews” and not actually part of the base set. I always thought it was a cool subset, so I was a bit surprised to see these preview cards listed. The 2004 Topps Gold parallel was a nice add as well, and I remember Hidalgo having a pretty good arm out there in right field. 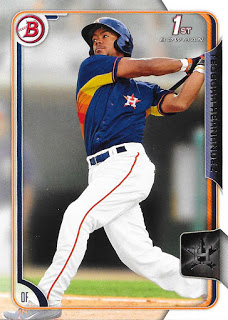 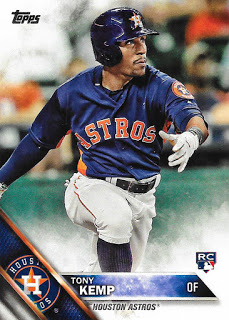 Even more outfielders! Well, kind of – I still feel a bit of a pang at the loss of Teoscar Hernandez. I think he could have a pretty darn good year this season, so we’ll see what happens with him in Toronto. I thought it was interesting that Tony Kemp was listed as an outfielder on this 2016 Update card – I mean, I suppose it makes sense, he spent most of his few big league appearances in left field. But Kemp has come up through the minors as a second baseman – albeit one with a lot of promise who is blocked by a certain superstar MVP at the major league level. 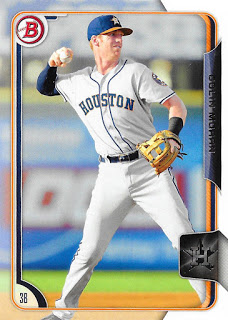 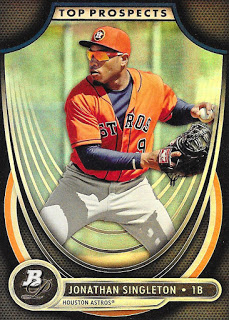 Speaking of infield prospects, here’s another pair of guys in the system. I’m looking for big things from Colin Moran this season – he was having a breakout before a fastball to the face knocked him out for most of last year, but I was really happy to see him come back in time for the September stretch run. Not only that, but also he was still hitting the ball pretty well. I’m hoping that continues and that he doesn’t slip into Dickie Thon territory. We don’t need a repeat of that. The Singleton card is really cool – I just wish he’d been able to stick at the big league level. As it is, he spent last year relegated to AA Corpus Christi – certainly the best paid player at that level. Still, as far as baseball money goes, his contract is a drop in the bucket. 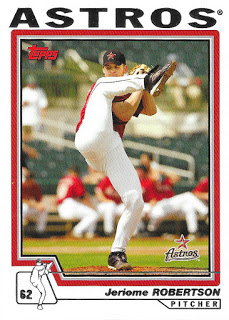 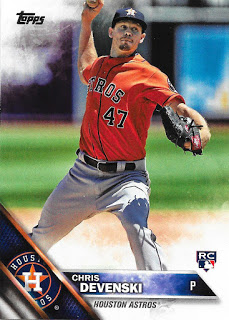 Let’s see – we haven’t talked pitchers at all so far. They were there in abundance in this package, but I only scanned a few. This 2004 Topps card of the late Jeriome Robertson stood out to me because of that insane leg kick. That’s not even a Ryan kick, that’s Feller-esque! Young Jeriome had just finished a fine 2003 season that netted him a seventh place finish in NL ROY voting. Unfortunately, he died in a motorcycle accident in 2010. On the right, we have Chris “Devo” “The Dragon” Devenski, and while the crop is a little tight, he’s unmistakably about to unleash his infamous “Circle of Death” circle-change on some poor hitter. Devo burst on the scene in 2016 and had a pretty good year last year, with some late-season struggles. Hopefully he’ll iron those out before 2018 starts. 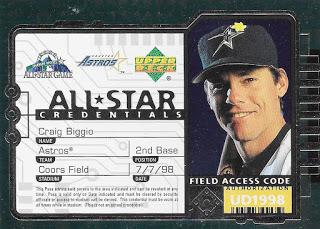 You’ve made it this far – it’s time to wrap up with the big names. Don’t worry, Craig’s got you covered when it comes to credentials. 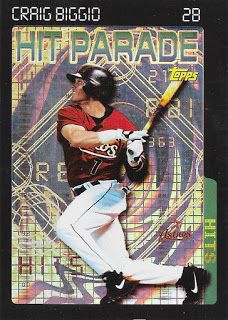 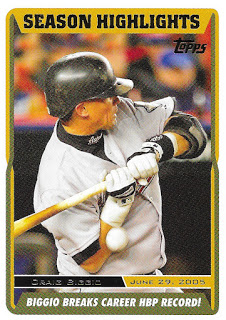 Cards celebrating Biggio hitting and getting hit. I dig it. The Hit Parade insert from 2003 Topps is especially nice looking in hand. I think Ryan managed to knock out all or almost all of my 2005 Update needs in this trade.

Oooooh-weee! 2002 Stadium Club, you are looking fine! I can get behind this set for sure. Give me a lovely full-bleed set featuring great photography and minimal graphic interruption, and I am a happy camper, y’all. 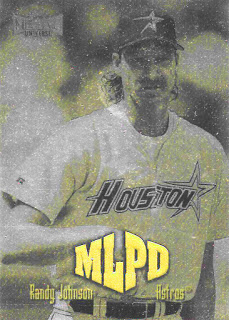 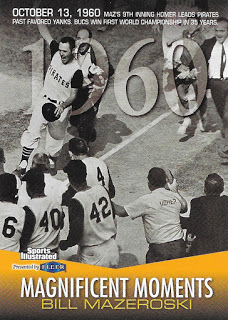 Another pair of HOFers. Pudge didn’t get much Astros cardboard, but his first flagship offering, which led off the 2009 Update set, is certainly a good one. I can’t tell which poor sap on his shoulder is getting tagged out, but he’s dead to rights here. Finally, here’s that Mazeroski card I promised up at the top of the post. It comes from one of the wonderful Sports Illustrated sets that Fleer put out in the late 90s – 1998 SI World Series Fever, to be precise. 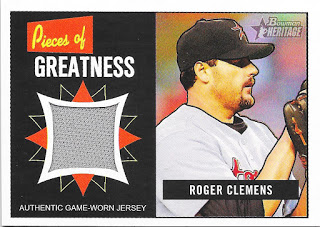 We’ll close with the relic that I teased in the beginning, and it’s a nice one. There were a few Clemens cards in the package, but this Pieces of Greatness relic from 2005 Bowman Heritage certainly takes the cake. Roger had just destroyed the NL in 2004, going 18-4 with a 2.98 ERA, a 1.157 WHIP, and 218 strikeouts in 214.1 innings en route to his seventh Cy Young award. Can you imagine being a kid in 2005 and pulling this out of a pack? I would have been over the moon.

This trade put me over the moon, that’s for sure! Thanks again for an awesome swap, Ryan – sorry it took so long for me to post!