by MarcPosted onMarch 27, 2018July 9, 2019
What a wonderful day at the mailbox – there was not one, but three packages waiting for me when I opened it! Days like this certainly don’t make catching up any easier, so let’s go ahead and knock this out, shall we? Fortunately they were all relatively small packages. 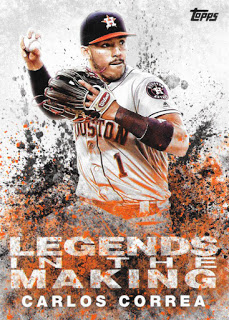 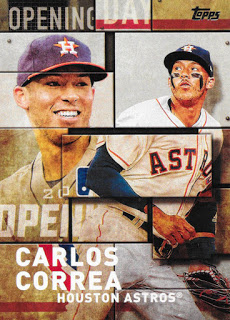 First up was a splendid two-card PWE from our pal Peter of Baseball Every Night. He’d messaged me on the Twitters to ask if I needed any of the Astros he pulled from Series 1. I had already come into the base cards he pulled (thanks to Tony), but was more than happy to be the recipient of these two Correa inserts. Thanks Peter! 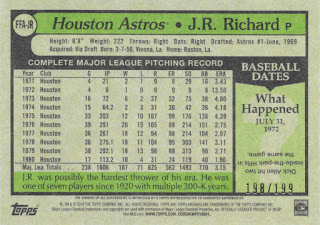 The other two packages were TCDB trades, and I’m going to dive right in and start with the big highlight from the first envelope. This is a Blue parallel autograph from 2016 Topps Archives Fan Favorites featuring legendary Astros hurler (and owner of the largest hand I’ve ever had the pleasure of shaking), J.R. Richard. This fabulous piece of cardboard came my way thanks to Sean, aka Broadway, with whom I believe I’ve traded once before. I sent Sean a stack of 2014/2015 Heritage, including some SPs, and came away with a really cool package of ‘Stros. 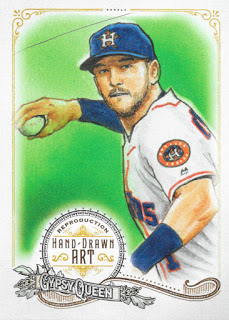 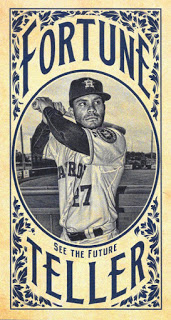 For instance, there were these two Gypsy Queen inserts from last year. You’ll have to forgive the cat hair on the left, apparently I didn’t wipe down my scanner first. I know that’s supposed to be Correa, but it sure looks more like Bregman. 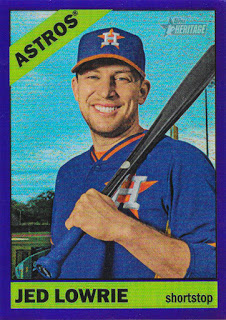 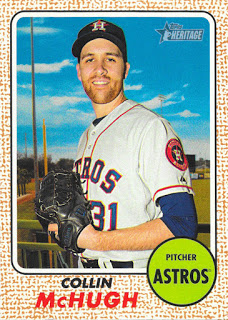 There was some Heritage goodness coming back my direction as well, including a Purple Chrome Refractor of Jed Lowrie from 2015 and a Collin McHugh base card I still needed from last year. 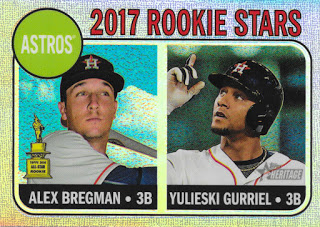 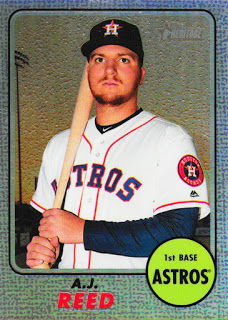 Lastly, there were these two shiny cards from 2017 Heritage. They were listed as Purple Refractors in the trade, so I was a bit perplexed when they showed up and didn’t look very purple at all. However, they’re not serial numbered (purples are the only ones lacking a serial number), and I suppose if you hold them the right way they do look a bit purple in the burlap. So – sure? They sure as heck don’t look like the Purples from High Numbers, which are very purple and look like the border on the Lowrie up there. But whatever, these are awesome cards. Thanks Sean! 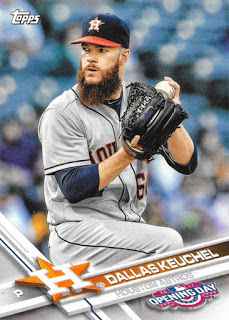 The final package was from another new trade partner, Jay, aka JaybirdOSU. It started off in a more subdued fashion, with a pair of Opening Day cards I still needed from 2016 and 2017, respectively. 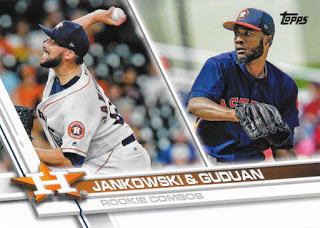 The next card was a real Guduan – meaning a good one, get it? Thanks, I’ll be here – well, I’ll be here for as long as this blog is around, so get used to it! Reymin’s stat line betrayed how electric his stuff was in the brief time he spent with the club last year, and I’m excited about what he might do going forward. I got another one of these in a previous package, but I sent it to Reymin at Spring Training, and you’ll see it in the next TTM Report. Fun Fact: Jordan Jankowski’s wife is also named Jordan, as we were constantly reminded last year. I guess when you’re not pitching that great, it’s the obscure factoids that come out in full force. Seriously, I think we heard about it from at least 6 different outlets. 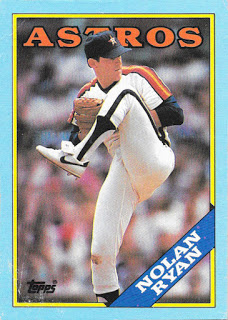 Jay also had a lovely box bottom card from 1988 Topps that I had totally missed when making the spreadsheet version of my wantlist. That’s the beauty of TCDB in a nutshell – every couple months I have it add any missing Astros to my site wantlist, and previously unlisted cards will make their way into the fold, surprising even myself. 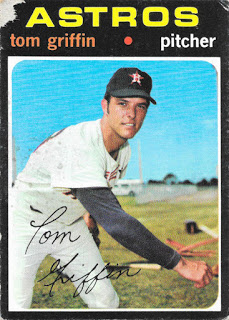 The real prize in Jay’s package, though, was this 1971 Tom Griffin. Sure, it’s seen better days and has a bit of paper loss (which he was certain to warn me about), but I’d much rather be able to fill a whole than turn into some condition-sensitive nut. I can always upgrade it later, and move this one into the inevitable 1971 set build that I will undertake, oh, probably when I’m 50 at this rate. Thanks Jay!

As far as the backlog goes – well, I’m not going to make that end of March goal. The month got a little busy, and warmer weather ’round these parts has meant more time outside working on various things. If I can maintain a fairly good posting rate, though, the end of April is a pretty darn reasonable target.