by MarcPosted onSeptember 1, 2018July 9, 2019
I’m keeping this posting streak alive! It’s a new month, so that means it’s time to take a look at what arrived in August. It’s another light month return-wise, but I hadn’t really been writing many requests so that’s to be expected. I did send out a flurry of end-of-season requests to some minor league coaches last week – fingers crossed that I put them in the mail in time. I suppose it’s about time to write a few end-of-season letters for guys in the majors, too. 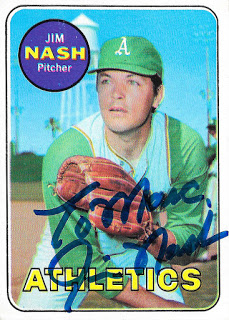 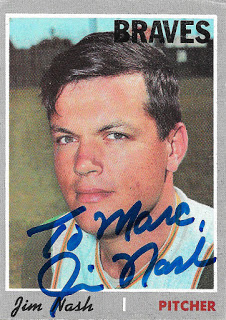 My first return in August came from Jim Nash – a young phenom who finished second in the AL ROY voting in 1966. Nash finished the season 12-1 with a save in 18 appearances, 17 of which were starts, a 2.06 ERA, and a 1.118 WHIP. Jim was part of a slew of talented young pitching on the A’s in the late 60’s, but he was unable to live up to the promise of his rookie season.

I decided to write Jim after looking back through some old Sports Illustrated covers and seeing this awesome triple-shot from when Jim graced the front of the issue in March 1967. Well, that just screamed “make a custom!” So I checked SCN to see if Jim was a good TTM candidate, and lo and behold he has a great success rate. I nabbed the ’69 and ’70 up at the top of the post in a Sportslots order that I’d made earlier this summer. I could have spent just a bit more for a clean ’67, but the facsimile signature on those makes them a bit busy for autos, and I just couldn’t pass up that 1969. It’s not often you see a water tower on a card, after all. I love how these turned out! 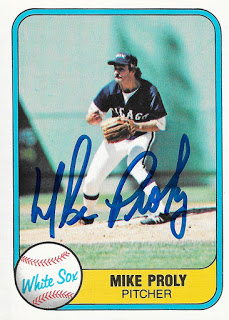 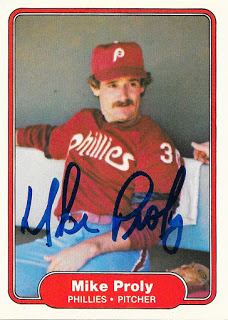 The next one to arrive in my mailbox was Mike Proly, a journeyman pitcher whom I discovered when Riley decided to featured him as the “Old School Player of the Week” on the Productive Outs podcast. If you like the sound of two dudes irreverently talking baseball and music and making a ton of dumb jokes, the Prodcast is for you. Riley described Mike as being one of the saddest, mouse-faced ballplayers you’ve ever seen. Go google some photos of him, you’ll see it too. Also, Mike’s surname makes for some great jokes. If you write Mike, he’ll Proly write you back. I was happy to pick up another ’81 Fleer for my set, and once I’d decided to write Mike I scooped up the ’82 in a TCDB swap. 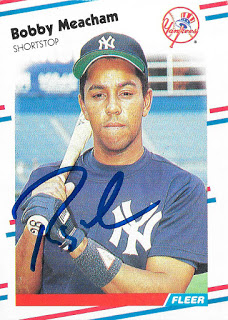 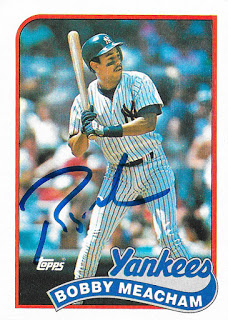 The third – and final – return of August came just days later, from former Yankee shortstop and current Buffalo Bisons manager Bobby Meacham. It’s my personal opinion that ’88 Fleer is one of those sets that just happens to look great when signed. ’89 Topps is typically pretty nice as well, but something about that Fleer border just makes it sing. If I were collecting a bunch of sets, ’84, ’86, and ’88 Fleer would be on my chase list. I’m not doing that, however. 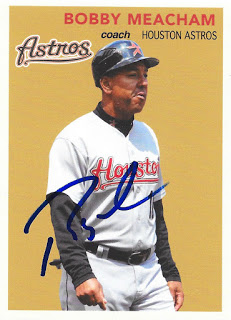 The real reason I wrote to Bobby was not to get that ’88 Fleer signed, though – it was because he spent three years as a coach for the Astros, under manager Brad Mills. I had seen several returns roll in from Bobby, so I made sure to hunt down a good image of him and whip up a custom. I actually sent three of these his way, and offered him the extras to keep. Meacham kept one, sending the other two back signed. It’s always nice to check another Astro-graph off the list, even the coaches. I think I particularly enjoy making the coach cards (ahem, Night Owl), because the guys are usually pretty surprised to see them.

Alright, well that was it for August! Hopefully a few more minor league coaches roll into the mailbox in September, as the regular season comes to a close this weekend. And hopefully I can keep up this posting streak – I’ve got a full week of them already planned.