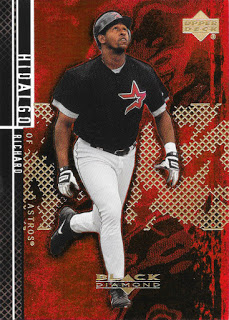 Ol’ Richard is wondering if he’s ever going to make it into that top banner. Maybe some day I’ll actually get around to updating it. For now, I have a bevy of trade posts (and other cardboard goodies) that I need to knock out.
This one came in courtesy of Aaron, whose handle at TCDB is Shaggy69. It was one of my epic trades to start the year off right – cleaning out a bunch of unwanted cardboard in exchange for some ‘Stros and other things I’d much rather have. All told, Aaron sent 52 cards my way, and in exchange I unloaded a nice hefty pile of 326 football and basketball cards to help in his set building endeavors. I’m only interested in keeping a small stack of cards from each of those sports, so that is one heck of a deal for me! 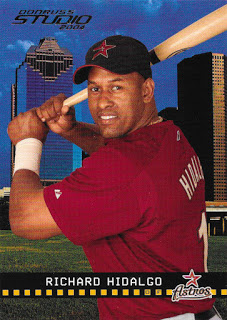 Here’s a pair from 2004 Studio. I think I’ve picked up most of the Astros this year, but they were definitely a new set to me when this trade happened. Studio stole a page out of the ’93 Leaf card backs and went with the city skyline for these cards. I like the sprocketholes and typeface of the nameplate, which harken back to what you would see an old spool of film. 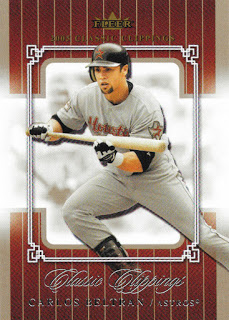 A good chunk of this trade consisted of early aughts cards, from around the time that I quit collecting and the number of sets (and inserts) really exploded. Here’s a couple big names for you: Carlos Beltran on the left, and Jeff Kent on the right – with a Sean Casey cameo. Casey always seemed to do a number on us, and while I respected him I just couldn’t stand him. I can definitely stand some Ultra cards, though.

Ooh, it’s a card from that time that Fleer tried to go back and update the feel of the ’55-’56 Topps sets. These were on a nice, hefty card stock. The only drag is that those action photos have a terrible palette knife filter on them, making them splotchy and ruining the details. 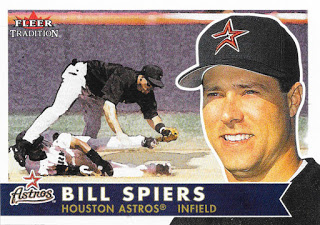 I loved some Billy Spiers action. He was quite the utility man – able to play several infield and outfield positions, and he could actually hit. He’s probably one of the earliest “super-utility” guys that I can remember watching. His equivalent today would be Marwin Gonzalez. 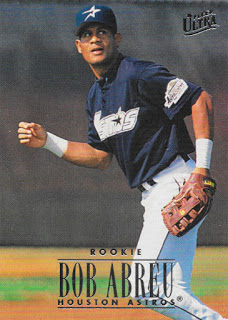 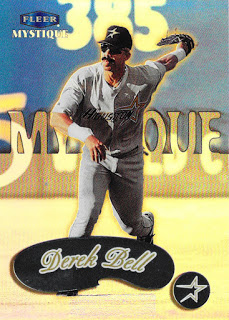 It’s kind of funny how no matter how many times you may have seen the designs, you can fail to recall them. For instance, I know this 1996 Ultra design, and the ’92-’94 cards all readily come to mind. 1995 failed me, however, and I had to go look it up to find some frame of reference for the design shift. Fleer really tightened it up in 1996, after the foil stamp logo and two-color nameplate of 1995. This Abreu rookie is nice, but in my opinion Ultra really jumped up the design ladder when 1997 hit. The Derek Bell is from 1999 Mystique, a short-lived Fleer offering, and no, it’s not a parallel. They all say Mystique in the background. Hm, I wonder why it didn’t last? 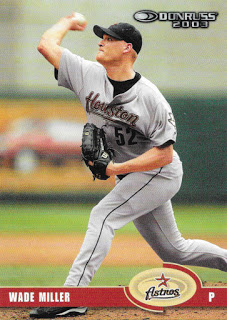 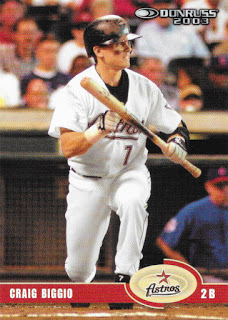 When Donruss returned in 2001 after a two-year hiatus, they went absolutely nuts. “Throwback” designs for the missing years, a ton of sets, etc. They kept it up in 2002 – even issuing an entire throwback design compilation set (Originals) and a terrible set called Fan Club, and then an entire compilation set of that year’s designs called Best of Fan Club. Ugh. But 2003 was different. The 2003 base set design is actually quite nice, minimalistic, and even lacks foil. 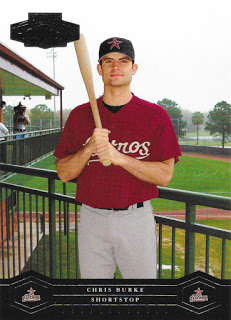 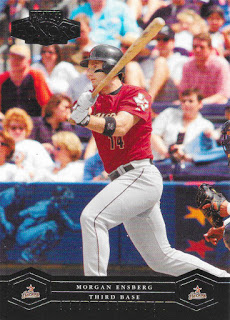 Here’s another set that was a bit of a surprise – my first cards from 2004 Playoff Honors. I mentioned recently that I quite like the various Playoff sets, and this one is no exception. The double logo in the nameplate is a little odd, now that I think of it. But it’s a simple design with some great photos. While I generally abhor the shift to the brick/sand/black uniforms, the red Sunday alternates were quite nice. 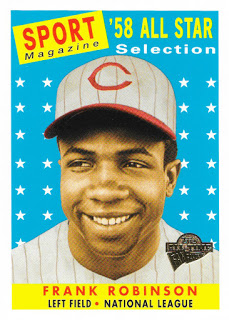 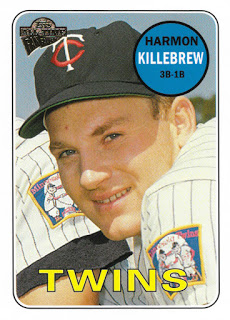 Once I was done picking off Astros I needed from Aaron’s trade list, I rooted around to see if there was anything else of interest to me. Sure enough, I found a nice little grip of cards from the 2004 Topp All-Time Fan Favorites set. I particularly liked the ’58 All-Star design of Frank Robinson, and I nabbed this Killer for my PC.

I scooped up a few more that weren’t shown here – Tim Raines, Brooks Robinson, Luis Aparicio – but these two were my favorites out of the group. Irvin actually lived here in Houston for the last decade or so of his life, and was a member of the Houston Eagles in the latter days of Negro League baseball before being picked up by the Giants. Buck O’Neil was a legend as well, and while he wasn’t fortunate enough to get a shot at major league baseball, he was instrumental to the game both as a scout and coach and also as a fount of historic wisdom regarding the Negro Leagues. I only wish I had written to him while he was still alive. They really need to put Buck in the Hall.

Thanks so much for the trade Aaron! Let’s do another one soon.