by MarcPosted onSeptember 2, 2018July 9, 2019
A few weeks ago, while the Mariners were in town, the annual phenomenon that is National Baseball Card Day happened, and I went to see the game with my dad.
This post isn’t about that day, though. You’ll have to show back up tomorrow to read about that. You see, I did get some National Baseball Card Day cards – Astros ones at that – but it occurred two days prior to NBCD. The Astros jumped the gun and gave away their NBCD team set cards on that Thursday. I went to that ballgame with my pal Brendan, who wasn’t interested in the giveaway cards, so he gave his pack to me. That meant two packs of four cards, for what turned out to be a 10-card set. Let’s take a look at what we landed. 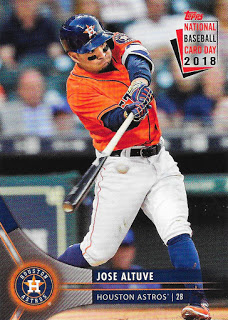 I didn’t keep them in “pack order,” so let’s just start with the top of the set: Jose Altuve. He’s the only guy in the 30-card NBCD promo packs that were given away in stores, so I’m going to assume that card probably has the same front. Heck, it probably has the same back, except for the number. Let’s talk about those backs for a minute: nice and simple writeup, fairly clean – and no stats! What the hell? I mean, give us at least a little stat line down there, Topps. 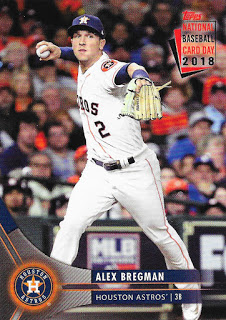 Cards two and three: Alex Bregman and Marwin Gonzalez. As disappointed as I am in the backs, I actually really like the design. It’s a little Bowman-esque with its graphics, and it’s totally great as a promo set. I haven’t been paying too much attention to photo usage in the various sets this year, but I’m pretty sure that’s the Marwin shot I just pulled from Topps Chrome. 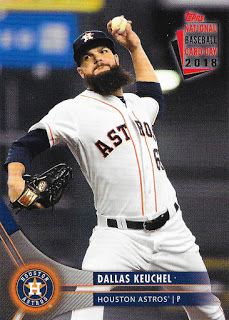 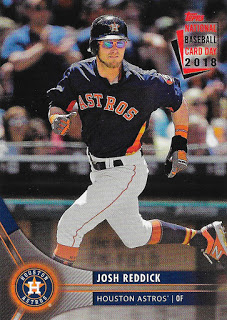 Cards 4 and 5: Dallas Keuchel and Josh Reddick. I think that’s the same shot for Reddick’s flagship card, too. But hey, I’m not gonna complain about things like that. I’m up to half of the set! 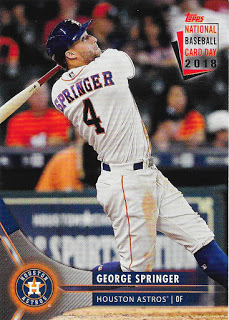 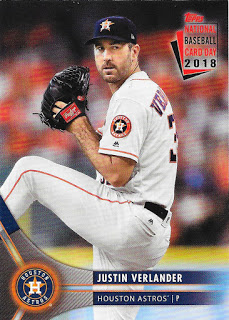 Cards 6 and 7: Our World Series heroes, George Springer and Justin Verlander. It was very nice to land these two. I dig that big ol’ swing on George’s card.
And that’s where I wound up. I did find two cards on the ground while walking through the stadium concourse, which brought my total to 10, but the other three are dupes. The giveaway was cool – it brought back memories of when I went to the Mother’s Cookies giveaway day in 1998. The thing I didn’t see, though, was any trading – and that gave me a little tinge of sadness. I mean, the best thing about the Mother’s giveaway was that you got 22 of the 28 cards in the team set, and six extras of one card for trading. You had to go around the stadium and swap with people if you wanted to try and build the set, and that made it insanely fun. I just hope that someone at Topps picks up on that for next year. Hey Sooz, any way you can make something happen?
As for the game – the Astros made it into a pretty good one, despite the fact that Justin got tagged for a bunch of runs early. He was actually thrown out on a pretty bogus decision by the ump, getting down on himself after a missed pitch and the ump interpreted it as arguing the call. Brad Peacock came into the game in the 2nd inning with Houston down 6-0. The ‘Stros put up 2 runs in the 3rd, gave up a pair in the 6th and then got them back in the bottom of the inning, and scored a run each in the 7th and 9th, but ultimately dropped the game 8-6. Tony Kemp was the player of the game, going 3-for-4 with a run scored and two RBIs, so he’ll get the game card whenever I make it.
Did anyone else score some giveaway cards? I’m curious as to your thoughts.