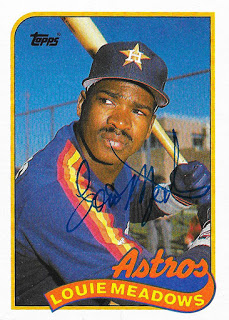 Woof! I promised this post almost a week ago now! What’s wrong with me? I lost my blogging momentum.

I mean, we all know what happened – it’s the same reason for all of us, right? Life finds a way of getting in the way. Honestly, this is just a (big fat semi-obsessive) hobby, so it has to take a back seat sometimes.

Anyhow, in my last post I talked about the giveaway cards I got from the National Baseball Card Day team packs, which were actually given out two days prior to NBCD. I also mentioned that two days later, I went to another game with my father. My parents buy into a season ticket package with a group of friends, and they hold a draft before the season to select games. When my dad asked if there were any I really wanted to go to, this is the date I had circled on my calendar.

That’s because it was during the Astros “Legends Weekend” – a now annual tradition which they allot to a weekend series in July/August. The festivities usually include wearing throwbacks at some point (with a corresponding giveaway), and bringing back some of the former players for a pre-game autograph session before the Saturday game. This year they added a Legends Home Run Derby before the Sunday game. “Legends” is a pretty loose term for the guys that show up – some of them are club icons, some are bit players that were only with the team for a short time. That’s precisely why I love the autograph session though – it often allows me to add some names at both ends of the spectrum to my Astro-graphs collection.

The catch now, however, is that you have to claim a voucher for the autograph session. Now that the team is good and extremely popular (winning the World Series will do that), what were once typical email announcements spark a frenzy of people attempting to claim a voucher. I dutifully waited for the day they were announced, checking frequently. Then one day I saw my email – here it was! Only, it had been sent two hours earlier. My heart sank. Surely they were all gone. 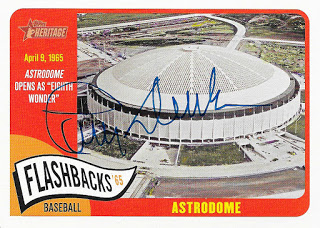 Yep. I tried posting on Craigslist and in some Astros fan groups, but no voucher was to be found. Still, I’ve gotten in these things before without one, and I had another plan. I boxed up a copious amount of cards of guys that would be there – probably 40 Gerald Young cards were in the stack – along with some dupes of Astros stars. If I couldn’t get in, I’d try my luck at finding some kids and supply them with cards to get signed, and hope a parent wouldn’t mind trying to get me a copy as they went through the line. At any rate, I planned to give a bunch of these cards away to some kiddos.

This might have worked, if it weren’t for the fact that I arrived at the ballpark at the tail end of the session. They had opened the gates an hour earlier than normal, something I hadn’t anticipated. I stood inside the ballpark, anxious and trying to recognize the guys who were starting to get up from their signing tables. They were obviously about to come through the doors to be led down to the field level. I pulled a small stack out and made a few priorities. I managed to catch Louie Meadows and get that ’89 Topps signed – a big win for me as he’s nigh impossible TTM. I got him last year at the signing, but didn’t have a card of his so I had settled for one of those Fleer Stickers from the late ’80s.

As I walked alongside the parade of former Astros, getting denials from handlers and fumbling my cards, I managed to get a yes from Larry Dierker – a longtime personal favorite Astro of mine. I have plenty of Dierker autographs at this point, but it was really nice to get one of these 2014 Heritage Astrodome cards signed by him. 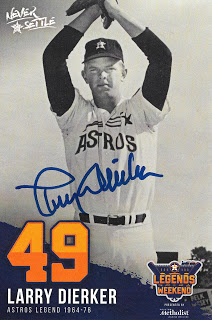 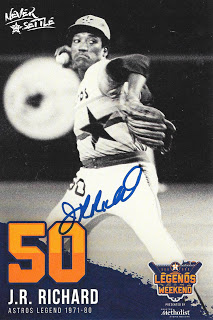 With the players all being trotted off to the field, I sighed and looked at my two lonely successes. “At least I got Meadows on a real card now,” I thought. I snuck into the adjacent room where the signing was (the former train station that anchors the outfield wall of the ballpark) and went looking for some of the “Legends Postcards” that the club typically provides at these signings. They’re great items for people who don’t have anything of a particular player. Often, the guys will just keep signing a stack of them as people go by, telling them to pick one up even after the fan has gotten his one allotted item inked. By a stroke of luck, I found a few signed copies left, including Dierker and another famous Astro pitcher, J.R. Richard! 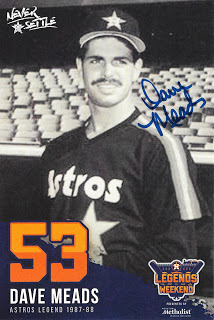 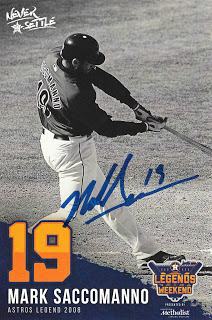 See what I mean by “Legends” being a loose term? Meads is great TTM, but Saccomanno was new to me. He spent a very brief amount of time with the club in 2008. 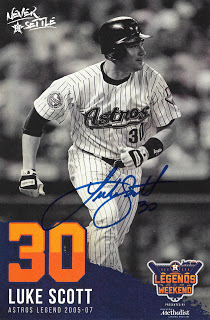 Ol’ Luke Scott was there, and I was really hoping to catch him in person, but these postcards will do for now. Luke wound up winning the Home Run Derby the next day – which was probably an easy bet, given how he was the most recent retiree – the others were Biggio, current broadcaster Geoff Blum, and occasional broadcast crew member Preston Wilson.

I had grabbed a few extra postcards that weren’t signed, and actually a few more that were. But when I headed over re-organize my bag and put everything away, (I had stopped at one of the picnic tables in the left field corner of the concourse) there was a kid – probably 10 or so – and his dad also at the table. As I arranged my things, I asked the kid if he had gotten any autographs. He said no, and his dad proceeded to tell me they were from Austin, and the boy’s cousin and dad (not sure if he was the dad’s brother or brother-in-law) were on their annual pilgrimage. The four of them come down for a weekend and see a pair of games each year; this was year three. “Well, now you have some autographs,” I told the kid as I handed him some of my spare copies. Gotta spread that good karma, right? 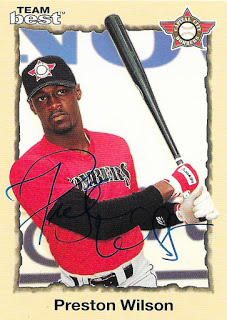 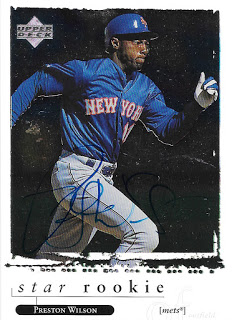 I had a bunch of time to kill at that point, so I thought I’d head over to the center field deck, where there’s a broadcast station that they use for pregame and postgame segments. Art Howe has been in this role, sometimes it’s former Braves pitcher Mike Stanton. I got lucky, however, and happened to walk up just before Preston Wilson arrived – a guy who I still needed for the Astro-graphs project. Unfortunately I had stashed a good portion of my cards during a reorganization, and didn’t have any of his Astros cards with me. I did get these two rookies, including that 1998 Team Best of him on the Capitol City Bombers. The shiny ’98 Upper Deck looks much nicer in person. 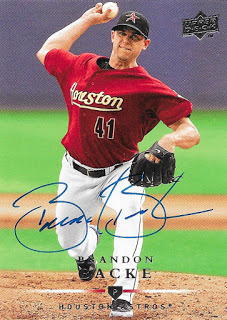 After that, I did something I haven’t done in a long while – I headed down behind the dugout to try once more. I had noticed all the players were sitting in the seats behind home plate (the Astros call this the “Diamond Club”), but seeing as it was still pretty early there wasn’t anybody down by them. As the 25+ guys were chatting away and waiting for their pregame appearance, I thought I’d give it a shot. Eventually I caught Brandon Backe’s attention and he said he’d sign as he walked out to the field, which he did. I like this ’08 Upper Deck better than the ’06 and ’08 Topps cards I have signed by him. That full bleed photo just sings, and he’s got a nice signature.
I was making small talk with another fan, who was trying to get some balls signed. The players were all led out to the field, and J.R. threw out the first pitch to Carlos Beltran (a surprise appearance), and I prepared a small hit list of cards of whom I wanted to land most, anticipating their return to the seats.
Only, that didn’t happen. I sighed in defeat as they were paraded down the right field line, and out through a tunnel. A couple guys walked back to the Diamond Club, however. One of whom was Jeff Bagwell – it was time for his monthly Saturday broadcast appearance, and I just missed getting a card signed by him. I was looking down and didn’t have the time to pull his ’90 Best minor league card from my stack, because I was getting this: 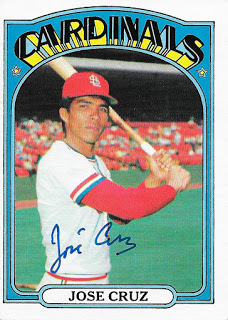 Yep, my final autograph of the day was Jose “Cheo” Cruz, longtime Astros star and former coach. This ’72 rookie card of his is off center (about 80-20 or maybe even 90-10), but otherwise it’s nice and crisp – and now it has ink! I’ll count that a victory in my book, even if I did just barely miss my childhood hero.

Afterwards, I headed up to the seats and met my dad, regaling him with my adventures as we took in what looked to be a promising game but ultimately resulted in another loss to the M’s. Along the way, I gave out several more cards to kids. There are a lot more parents bringing kids to games this year, so I think I’ll just start bringing a stack. Lord knows I don’t need these dupes, and I’d much rather see some kids light up when I hand them a spare Altuve or Correa or whomever it may be.

One small kid had tripped and bumped his knee on the stairs, which I chanced upon on my way up. He was refusing to go onward, so his dad had to come fetch him. The dad apologized for his kiddo blocking my ascent, to which I said something to the effect of don’t even worry about it. I dug in my bag real quick and pulled out a pair of Astros – a card each of Bagwell and Biggio, and handed them to the kiddo on my way up. I hope that made his little knee feel better.