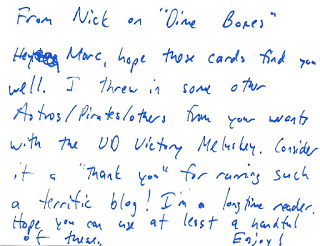 Back when this blog was really rolling – say, a month ago before I really let it go to waste, I posted a couple times about dime box finds from a couple LCS trips this year. I’d intended to follow those up with this post, and a subsequent one that you’ll hopefully see tomorrow, but I let a couple trade packages slip in there so as not to fall too far behind, and then I started working on customs, and then work and family stuff had me busy, and now instead of being a mere six months behind on these cards from our pal Dime Box Nick, I’m a full seven months back. 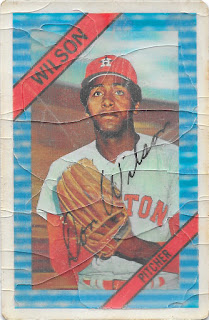 Hopefully Nick will understand. I’m pretty sure he will, as he’s one of the nicest guys around the blogosphere – and also the one with a seemingly unending reserve of dime boxes into which to dip and find cool finds. Oh, and he’s got one heck of a cool dad who helps him out from time to time in that department as well – go check his recent posts! Nick sent me these cards back in March – when the weather was, well, it only got cool here this week, so I can’t really complain about that now, can I? Let’s just say it was back when everyone’s baseball hopes for the season were still in full swing. He’d mentioned picking up some 1999 UD Victory, and had a spare Mitch Meluskey that I’d requested. His generosity knows no bounds, however, and there were many more great cards that showed up along with it – too many for a single post in fact, so you’ll have to come back and see the non-Astros stuff tomorrow.

Right off the top of one stack was this fine piece of Kellogg’s goodness! Sure, this cracked Don Wilson card has seen better days, but that’s just the way these ol’ boys work sometimes. I’ll still keep my eyes out for an upgrade someday, but this one is happily slotted into place in the Astros binders right now. 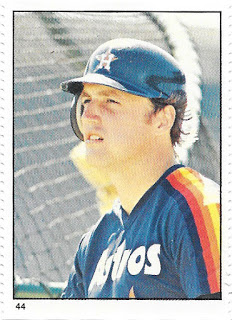 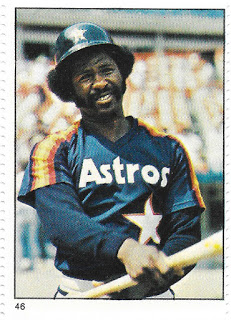 These were also really cool finds in this dime-box-by-mail: a pair of 1982 Fleer Stamps that I needed – specifically Terry Puhl and Tony Scott. Tony’s rocking the full mutton-chop-to-moustache connection in this pic. 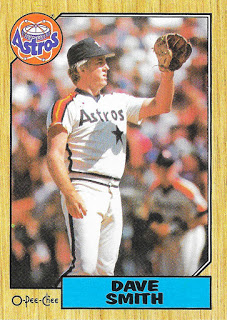 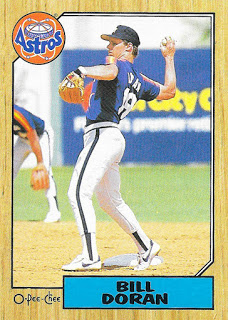 Oh, O-Pee-Chees! I’ve got several of them from the 1987 set now, thanks to these two new ones from Nick. Bill and Dave are playing catch.

I’ve professed my admiration for Morgan Ensberg many times on this blog. He was a real treat to watch at third base, as is our current man at the hot corner, Alex Bregman. Bregman seems to get to everything and yet is still rated as a below average third baseman by the metrics. That’s not to say that he isn’t good, only that the current crop of third baseman is rather excellent. I would’ve liked to have seen Statcast numbers on Ensberg – and Caminiti! This otherwise normal looking mid-aughts Fleer issue is not normal after all, but rather a “die-cut” mini – and by die cut they mean that top right corner is round instead of squared. 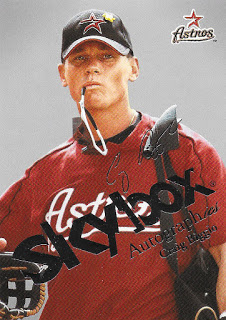 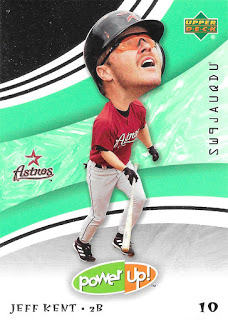 Staying in the mid-aughts but moving around the diamond, here’s a pair of excellent second basemen. Some of you out there would argue that Kent deserves a plaque in Cooperstown as well. Maybe it’s because of his brusque demeanor in his playing days, or the fact that I just never dug him that much, but I’ve always been on the skeptic side. I suppose I should really be looking at the numbers. It probably doesn’t help that in my mind, Biggio was always the premiere second sacker in the NL. I know that those Power-Ups are harkening back to the old 1938 Goudey Big Head set in a way, but damned if they aren’t still disturbing. 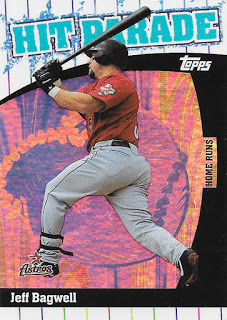 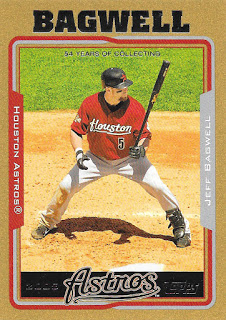 Ah, first base. Nick managed to find two beautiful new Bagwells for me. In my incoming/outgoing spreadsheet for 2018 I’ve been chronicling tallies of the following: cards received, new Astros, new Bagwells, and new Biggios. I’m looking forward to my eventual end-of-the-year examination. Meanwhile, I’m really enjoying these two, including the ’05 Gold parallel. 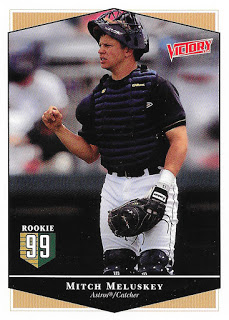 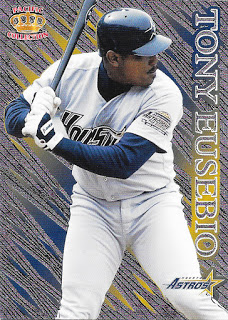 Finally, some catchers – and that aforementioned Mitch Meluskey whomst initiated this package. The Eusebio is one of the delightfully crazy Pacific issues from the beginning of their pivot from “your Spanish language” cards to “your insane, hold-nothing-back and let the graphic designers play” cards. I love Pacific.

I suppose I ought to show off some pitchers as well – and not just pitchers, but pitchers at the dish! Mike Hampton might have been pint-sized, but his bat packed a punch. Sure, he benefited from the fact that he spent some time playing at Coors later in his career, but the guy smacked 16 homers in his career. 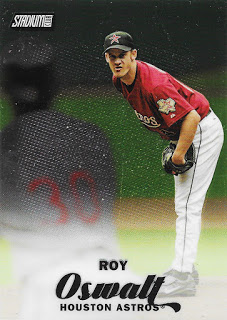 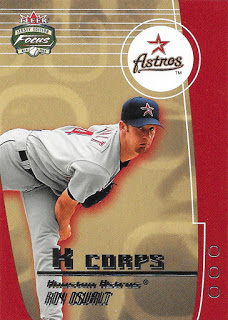 There were more Roy Oswalt cards in the package, including a chromed-out version of last year’s Stadium Club and this oddly laid out insert from 2003 Fleer Focus Jersey Edition. I don’t know what bothers me more, the mere placement of the logo bubble, or the fact that it is crushing the photo down into essentially occupying three-fifths of this card. 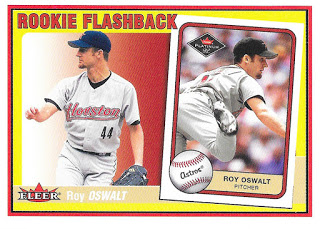 Ooh, and there was this baby sitting in the pile as well! A Rookie Flashback featuring Roy’s 2001 Fleer Platinum RC, itself a flashback to the original 1981 Fleer set issued two decades earlier. It’s Flashback Inception! 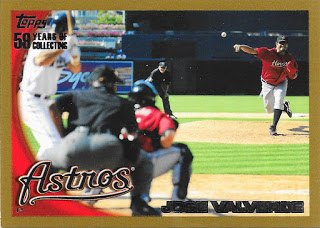 Speaking of horizontal goodness, Nick supplied more of that as well – and in golden form! 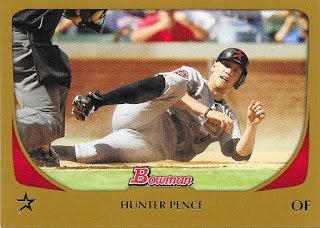 Not just Topps gold either, but a wonderful golden 2011 Bowman card of local coffee-shop owner Hunter Pence! I’m still hoping I run into him there this offseason, and I keep a couple cards of his in my glove box now just in case. I’m hoping Hunter isn’t finished with baseball, either – I feel like he could still provide a couple productive years to a club. 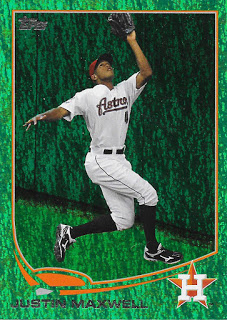 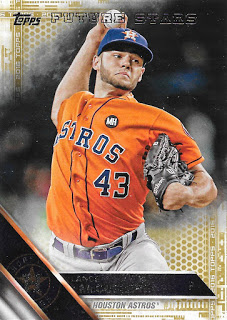 More shiny parallels! What else would I expect from the Dime Box king? The emerald parallels were pretty nice, but I’m actually rather fond of this gold parallel of Lance McCullers from 2016 Topps. It makes that set design almost enjoyable. Almost. 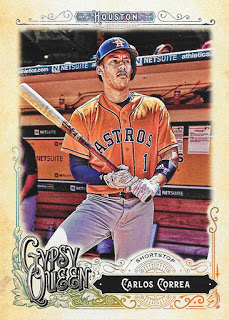 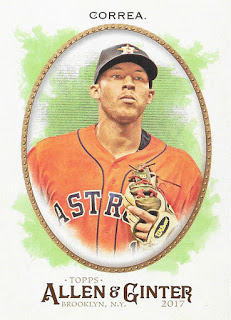 I can’t imagine that these last several were dime box finds – although you never can be quite sure when dealing with Nick. Didn’t he find nickel boxes not too long ago? Anyway, I think these and the subsequent cards were probably spares from recent pack openings. Correa wasn’t himself the past few months, and while the Astros were able to supplement their way through it to finish off the season, I can’t imagine that it helped having a star shortstop with a back injury in the postseason. Love these two cards of Carlos. 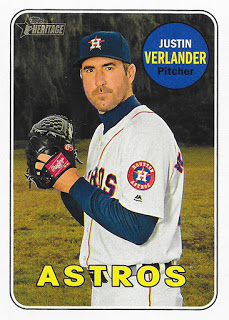 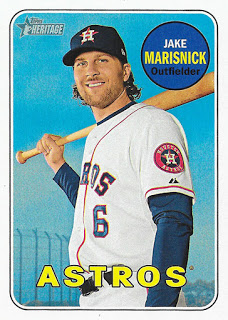 Nick also sent along a few goodies from Heritage. These would have been brand new – and I believe my first card of JV featuring a photo of him in a Houston uniform. Jake had another rough up-and-down year, eventually relegated to the fourth outfielder / defensive replacement slot. He’s such a damn nice guy and I’m pulling hard for him. 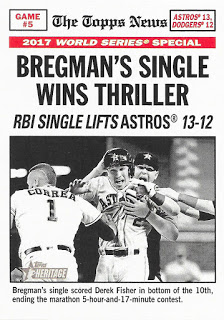 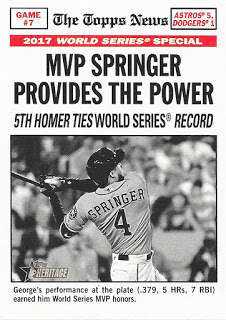 Ah, happier times. I still need a few more of these, although I don’t have this binder nearby to check it at the moment. Yes, I do need the Dodger wins to complete the World Series subset. I think I’ve got two of those. At any rate, Topps did a really nice job re-creating these, even if they gave it a dumb faux masthead instead of figuring out a way to get The Sporting News in there. 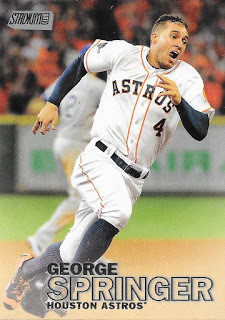 Finally, I’ll end the Astros portion of this wonderful package with this 2016 Stadium Club card of George Springer. I do believe this is a photo from the 2015 ALDS – it looks like that’s a postseason patch on Springer’s shoulder.
My brother said that he thinks Springer’s helmet flies off more than anyone else in the league. I told him that Odubel Herrera might have something else to say about that.
As bummed out as it felt to drop some close games to Boston and get robbed on a couple calls, I know the guys will come charging back next season. They’ll have a chip on their shoulder, and last time that worked out pretty well.
Now go Dodgers. Oh, and come back tomorrow to see the non-Astros that Nick sent my way!