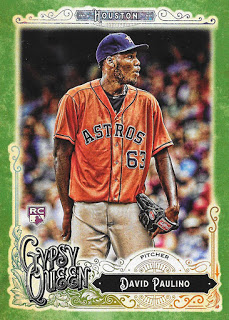 I’m trying to polish off the trades from April so that I can continue my streak of catching up on overdue posts and hopefully be back to 0 in December. Here’s a real quick trade package that I shouldn’t have neglected for so long – but back in April I think I was still posting about stuff from 9 months prior, so what’s changed, really?

These cards came in from Carlos, aka Corozco over at TCDB. We did an even-up 13-for-13 swap – something that’s a bit rare for me this year given that I’ve been trying to reduce the excess cardboard around these parts. I’d sent him an envelope full of new cards – some Donruss, Topps, GQ, and Heritage, and in return I got a lovely little package that helped me out in several areas.

One of my favorites was this green parallel from last year’s GQ set, featuring David Paulino. I had some high hopes for this kid, but it seemed the organization soured on him after he got popped for a PED suspension last year. They shipped him to Toronto as part of the Giles-Osuna trade at the deadline this season. 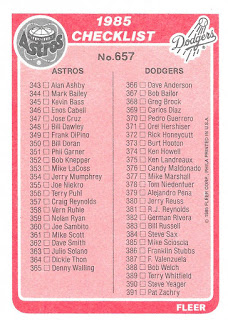 Wait, what is this junk waxness? I was pretty stoked as I think both of these polished off team sets, if I remember right. Always fun when you let a checklist creep back into those want lists. 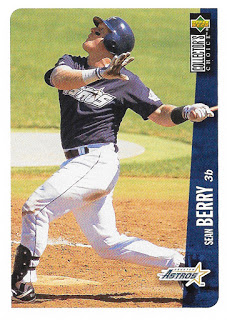 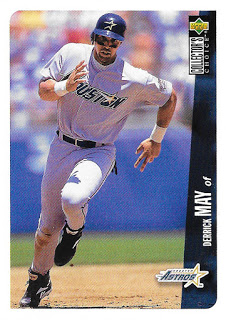 Ah, 1996 Collector’s Choice – a very fine set. I picked up a handful of these in this trade. That’s one of Berry’s first cards in an Astros uniform, and one of May’s few Astros cards. I think it was actually a dupe that I picked up to send to him for a signature. 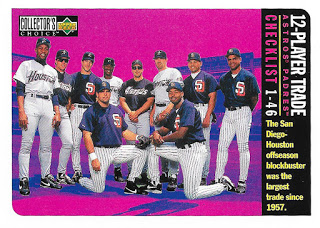 My favorite card pickup from that set, however, is easily this checklist highlighting the massive TWELVE PLAYER trade between the Astros and Padres in 1995 (sigh – you were missed Steve & Ken). As the card mentions, it was the largest trade since 1957, when the A’s made not one, but two trades of such magnitude, involving 12 and 13 players each. It doesn’t touch the 18 player swap between Baltimore and the Yankees in 1954, though. I’m impressed that they got 10 of the players involved onto a card. I’m guessing this was a Spring Training shot. 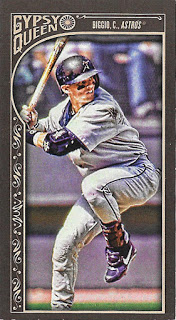 The final highlights here were a pair of Biggio inserts – a very nice 2015 GQ mini and a 2004 Bazooka Tattoo. I love growing the Biggio and Bagwell collections. It’ll be fun to check and see just how many of those I’ve added at year’s end.

Thanks again for the swap Carlos!