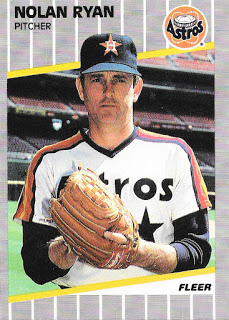 I suppose I could have written this post last night, but I was whiling away the hours transfixed on various election coverage. I won’t bore you with the hoary details, save to say that while Beto dropping in Texas was mildly heartbreaking if not completely unexpected, the narrowness of the margin was quite stunning. It looks like several down-ballot Democrats benefited from the turnout, including flipping two House seats here in Texas that were held by some real jackholes. It looks like our County Judge is going to flip – that position is a massive misnomer, as this is essentially the person that manages Harris County – the third largest county in the nation and home to a population larger than many, many states. The really nice local result is that our County Clerk flipped – he was a horribly incompetent dude. Sure, we have two weeks of early voting, but who cuts of early voting at 4:30 pm every day of it? Oh well, at least we didn’t elect a dead guy – scratch that, dead brothel owner who passed a few weeks ago and was found by arguably the most famous male porn star in history. Way to go, Nevada.

Nolan has reason to look skeptical in front of those rainbow tiered seats, with a 27 year-old graduate student – albeit a seemingly very capable one – taking over as County Judge. Ed Emmett had held that role for the past 11 years, and had been in local politics for 40. Say what you will about establishmentarianism, but the guy was a very moderate Republican, always reaching across the proverbial aisle, and he’s been the champion of finding a new use for the Astrodome, and secured its historical status along with the initiative to move forward with the redevelopment plan.

Ah, you see what I did there? I brought the whole thing full circle. So thank you for your service, Mr. Emmett, and godspeed to you, Lina Hidalgo.

So where did that Nolan – and the rest of these cards come from, anyway? Well, this was another TCDB trade from back in April, with a new trading partner: Jill, whose handle is jt58203. She was kind enough to let me send a bunch of 2017 and 2018 flagship her way in exchange for what you see here, along with a few more cards. The Nolan finished off my 1989 Fleer team set, finally. 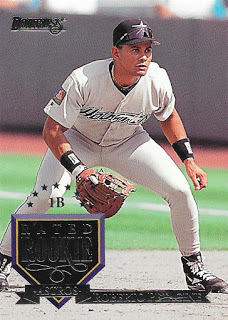 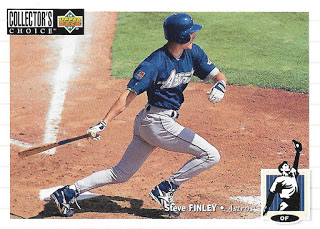 In my last post, I showed off an excellent 1996 Collector’s Choice checklist highlighting the massive 12-player trade between the Astros and Padres in 1995. In that trade, this infielder-outfielder duo was flipped – 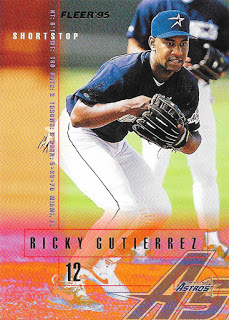 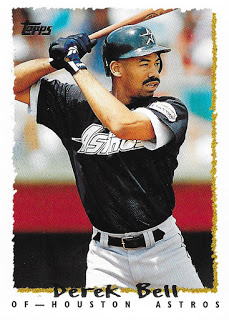 – for this one! It was nice to see these puppies flip my way in the trade, as they’re helping me check off some mid-90’s sets. The Petagine and Finley cards helped me finally put 1995 Donruss and 1994 Collector’s Choice to rest, respectively, and while I still need a few ’95 Fleer (Reynolds, Veres & Williams) and ’95 Topps (Hunter, Johnson, Elarton), this trade also wrapped up these two: Fleer Update and Topps Traded team sets. Yes, there was even more 95 Fleer Update than I’m going to post here, because I’m a sane person. 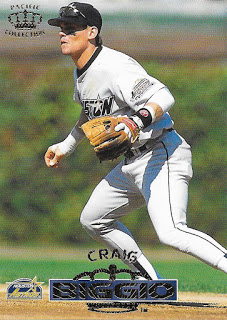 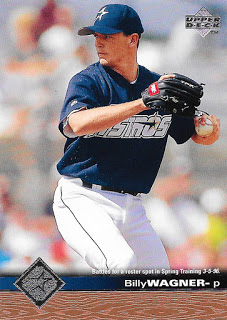 Alright, now we’re getting to that star power I promised in the title! 1996 Pacific Crown Collection and 1997 Upper Deck – a set that’s been growing on me lately. This was the advent of Upper Deck “game dating” certain photos, which they would continue in 1998. This can be a really cool concept, although “Battles for a roster spot in Spring Training” is a less than thrilling caption. It’s fun to be able to nail the photo to a specific date, though. 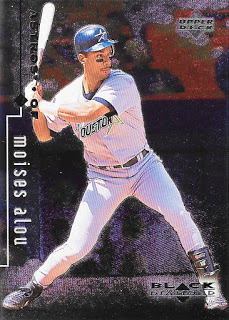 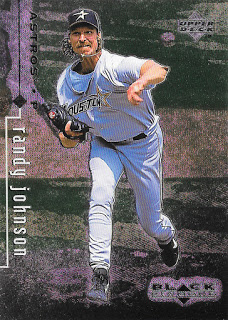 There was also some lovely 1999 Upper Deck Black Diamond in the package – a set that must have come out earlier in the year than I’d expect, as The Big Unit is not only still depicted in his Astros digs, but also denoted as still with the team. He’s got several cards from 1999 where he’s shown in the shooting star but denoted as having signed with Arizona. This was a super cool set to me when it originally came out, but I could only ever afford a couple packs as a kid. 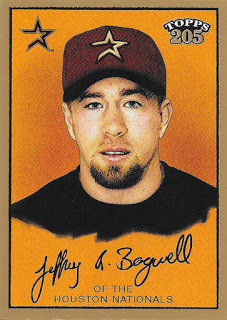 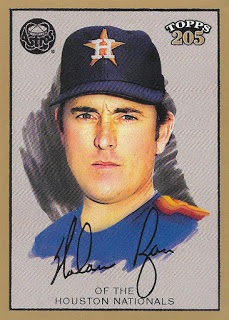 The big score of the package, though, was a very nice complete team set of the Astros from the 2003 Topps 205 series. That includes a lovely Nolan Ryan and not just one new Jeff Bagwell –

– but three new Jeff Bagwell cards! Why so many? Who cares!? I don’t need to know why there are so many in the set, I just needed them!
Many thanks for the trade, Jill! I’ll need to check your want lists again to see if I can send some more your way.

0 Replies to “Flipping For Some Star Power”