I’m writing these on Wednesday night, trying to get a jump on the rest of these Brubaker’s Dozen posts before the year is out and leave a little time for a few more extraneous posts as well. I was hoping to have a pretty calm week with plenty of writing and family time, but somehow the work schedule managed to fill up with projects to do during the normally dead week between Christmas and New Year’s. Ah, well. Forgive my brevity in the next couple posts, will you?

I’ve mentioned several times in this series how much my saved searches played a factor in these pickups, and this one is no exception. One of the longest held searches I’ve had is for three simple words: Dexter Press Astros. I’ve netted a few cool scores out of that one, and this particular find had me so excited when I landed it that I announced I couldn’t wait to share it on the blog. So what did I do? Well, I promptly tabled the post in order to get through more of my backlog, and these scans have been sitting in my queue since February. Whoops! 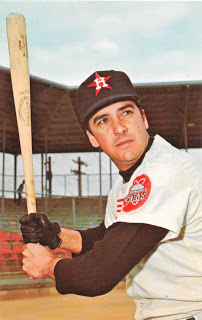 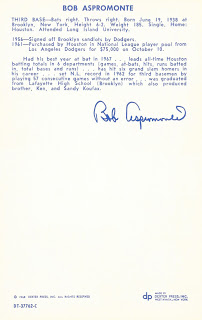 These oversized beauties come from the 1968 Dexter Press issue, and if I understand correctly, they were available as a redemption of sorts when you bought Coca-Cola. I could be wrong, I didn’t bother to do the requisite research here. Anyhow, they are just gorgeous, and I wound up with a nice lot of them for a very reasonable price. Much like the 1965 Jay Picture Pack photos, I wound up with 75% of the set: 9 of the 12 photos. Check out Aspro’s old-school batting glove! 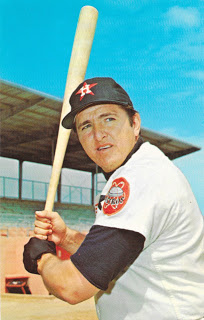 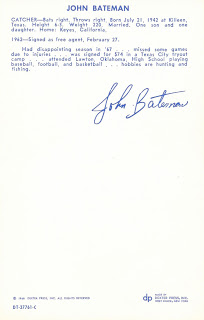 Ol’ John Bateman is wearing an old batting glove as well. Looks like he and Aspromonte were only able to afford a single pair, though, and they had to split it. I kid, I keeeeed. These are lovely photos – shot during Spring Training, and the oversized cards are 3 1/2″ x 5 1/2″ – just a little smaller than a postcard. My favorite quirk of these, outside of the excellent photography, are the bios on the back. 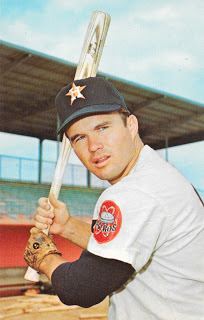 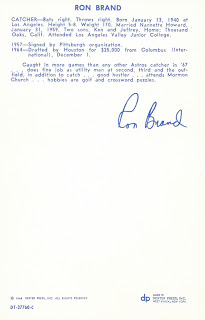 I mean, just look at Ron Brand’s bio: handedness, demographics, his marriage date, wife and kids, transactions, and then some quick hits about his ’67 season, before wrapping with “attends Mormon Church . . . hobbies are golf and crossword puzzles.” Superb. Love that they got the marriage date in there, it’s totally what I need on the back of a baseball card. 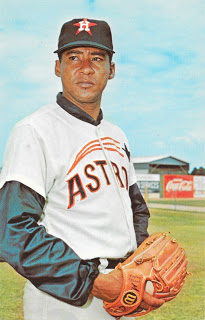 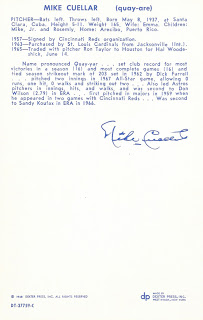 Mike Cuellar looks tough as nails here. Wish I could have seen him pitch. 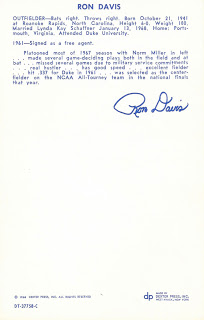 Looks like Ron Davis swiped that batting glove from John Bateman. Batting gloves are so ubiquitous now that it’s a surprise to see someone without them, like Evan Gattis. It’s intriguing to me how everyone seemed to wear just one glove early on, and it doesn’t seem to correspond to the top or bottom hand. I wonder when two gloves became the predominant choice. 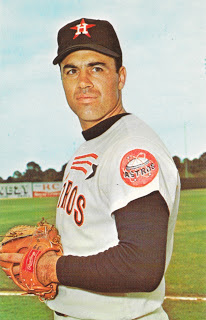 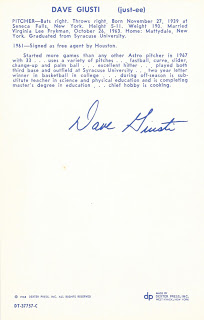 Another excellent photo. Dexter’s photographers really nailed these, the exposures are superb. Also, it’s worth noting that some of the players – and not just the “foreigners” – are given a pronunciation guideline alongside their names. You can see this on the Cuellar card as well. I always thought Dave’s last name was gee-ooh-stee or juice-tee, but apparently it’s just-ee. 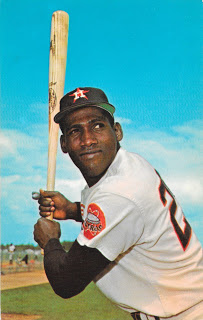 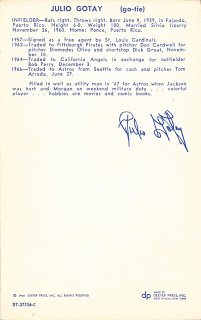 I also would have never placed Julio’s last name as “go-tie” as this back denotes. I always thought Gotay was pretty straightforward, but ¯_(ツ)_/¯. It’s also wild to see that “utility guys” are denoted as filling in while their teammates were on military leave and knowing that this was during Vietnam. 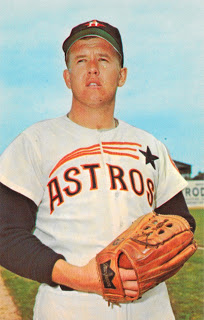 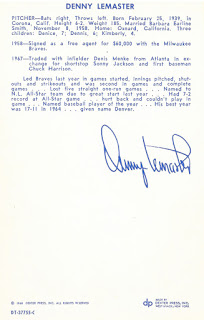 Lemaster was one of the big pickups heading into 1968, having been acquired along with Denis Menke from the Braves in exchange for Chuck Harrison and Sonny Jackson – both of whom were coming off good years but wouldn’t really repeat their success.
I mentioned that I picked up 9 of the 12 cards here. If you’re counting, that’s 8 so far, which means we have one more to go. I’m still missing three of the stars from the club: the aforementioned Denis Menke, Le Grand Orange (Staub) and the Toy Cannon (Wynn).
So if you’re a super-sleuth, you may have realized that the last card here is the big kahuna of the bunch: 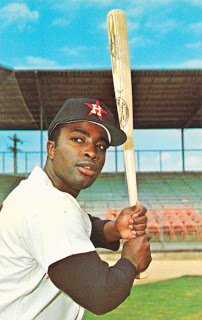 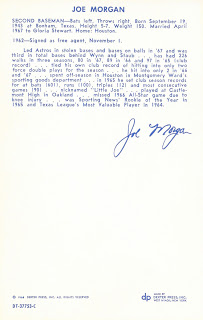 Yessiree, I even landed the Joe Morgan! What a beauty it is, too!
These ’68s don’t pop up on eBay much, and when they do they tend to be singles – or even worse, pesky graded versions. Landing nine of them in one fell swoop felt fantastic, and seeing these phenomenal cards in hand brought a good bit of joy to my day. With only three left, and some focus on re-prioritizing next year (as always), I can easily see that completing the set will likely end up on my list of goals for 2019. It may be a stretch goal, but it’ll be there.

P.S. While writing this, I did come across an entry on the SABR Baseball Cards blog about the various Dexter Press issues written by none other than one Keith Olbermann. Head on over and check it out if you’re so inclined.